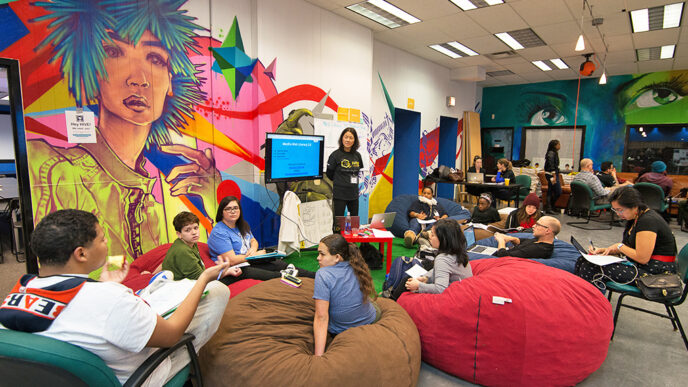 A definite buzz of anticipation filled the air early one recent Saturday morning in the big, busy, mural-splashed space at Blue1647. More than 120 education professionals, nonprofit and foundation leaders, entrepreneurs, developers and students from across Chicago were gathered for Hive Chicago Buzz, an education-focused “hack day.”

Their challenge: Create ideas for how to foster connected learning—a learning pedagogy that puts students’ interest at the center.

Presented by Mozilla Foundation’s Hive Chicago Learning Network (Hive Chicago) and supported by the Hive Chicago Fund for Connected Learning at The Chicago Community Trust, the event was dedicated to making education more powerful—and also more fair—both in and out of school through the use of digital tools.

Adults may believe that young people are super-savvy about computers and the Internet, “but the idea of ‘digital natives’ who have it all figured out is not borne out in practice,” said Sam Dyson, executive director of Hive Chicago. Many kids, especially poorer ones, have only “limited access and agency. They’re not proficient enough to solve the problems they’re going to encounter.”

Hive Chicago’s goal, Dyson explained, is to “support educators in moving people along that spectrum” of digital proficiency, no matter where they start out.

Sam Dyson, executive director of Hive Chicago, speaks at the opening plenary. With many young people “not proficient enough to solve the problems they’re going to encounter” in a digital world, Dyson says, the initiative aims to foster a connected learning environment where all students succeed.

David Bild, coordinator of the teen and young adult programs at the Peggy Notebaert Nature Museum, said that the tools and communities found on the web “are becoming more and more essential. The first thing people do when they meet you is, they want to check out your web page. It’s also the way people are able to find out about programs, and support them. If you’re not engaged in that, your voice will not be heard. You won’t have the power to be part of that conversation.”

The students who had come to Hive Chicago Buzz were serious about having an impact, too.

Malik Brown, 18, a senior at Instituto Health Sciences Career Academy, explained the workings of the “sky quality meter” the Adler Planetarium had built for the astronomy club at his school. Adler STEM Community Ambassadors Rosy Lugo and Chris Bresky were on hand to answer questions.

The simple device, which Lugo said anyone can make at home for less than $100, measures light pollution. Once students have an idea of how severe the problem is in their neighborhoods, they can start educating their communities about how to improve the situation, Brown told Hack Day attendees.

Another student said she had come for Grant Writing 101, because some of the projects she has been involved with at her high school have required serious funding. “I want to learn how to write grants, to bring that skill back to my school,” she said.

Malik Brown, a member of the astronomy club at Instituto Health Sciences Career Academy, demonstrates a “sky quality meter” that measures a neighborhood’s light pollution. This simple tool, which can be built at home for less than $100, is an example of the interplay between technology, education and community engagement.

The day was divided into “skill share” sessions, where participants could learn something new, and “working groups,” where they collaborated on figuring out how to take ideas up to the level of action.

Bild presented sessions on mapping, which can include everything from keeping track of the lichen that grows in trees around our city, a “bioindicator” of air quality; to plotting travel times for students from their homes to the Notebaert Museum in Lincoln Park, assessing their “transportation challenges” to participating in the educational opportunities there.

Maria Hibbs, executive director of the Hive Chicago Fund for Connected Learning, brainstorms during a working group session. By supporting collaborative events, Hibbs says, “we learn from one another to create things that are new.”

“Equity of access” to those extramural programs can be as important as good schools and the latest technology, said Maria Hibbs, executive director of the Hive Chicago Fund for Connected Learning, which supports Hive Chicago’s efforts.

The Fund makes grants of different dollar amounts available to “support innovation from ideation on up,” she said.

At an event like Hive Chicago Buzz, Hibbs said, “We learn from one another to create things that are new. You have an idea, share it, let it go, and end up with something that is more powerful.”