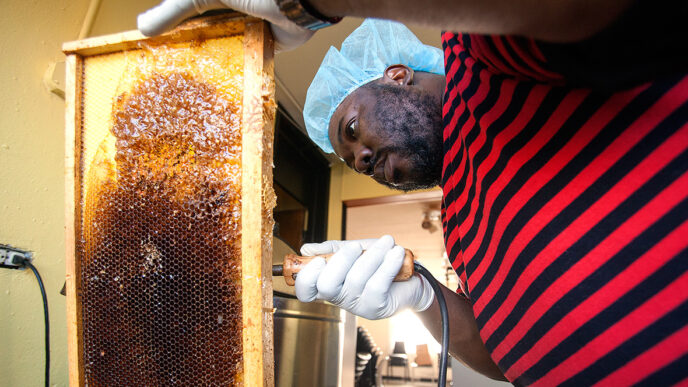 Taking the Sting Out of Re-Entry After Incarceration

It can take the employees at Sweet Beginnings a while to get used to their co-workers. The bees, that is.

But as Johnny Patterson quickly learned, “If you don’t aggravate them, they won’t bother you.”

Sweet Beginnings, a for-profit enterprise founded in 2004 by the North Lawndale Employment Network (NLEN), produces top-notch honey and the beelove line of personal-care products made from the sweet stuff. However, the organization’s real mission has to do with men and women like Johnny Patterson, who at the age of 44 has spent many years cycling in and out of prison—and now is looking for a second chance.

“I need to change what I’m doing,” Patterson says fervently.

NLEN hires or employs 20 to 35 people a year, all with “backgrounds,” as founding executive director Brenda Palms Barber calls them—criminal records, a requirement for all the employees of Sweet Beginnings. They also have to be ready, like Patterson, to do the hard work to shed a lifetime of bad habits.

The first stop is U-Turn Permitted, a four-week job-readiness program run by the NLEN. The program addresses such diverse life skills as personal finances, team-building and anger management.

Sweet Beginnings can be the next step. With more than 130 hives in four locations—including O’Hare airport, the Forest Preserve of Cook County and the organization’s West Side backyard— it offers real-world work experience in a business with livestock that needs to be tended, customers, sales goals and marketing materials.

The Chicago Community Trust has supported NLEN for a decade for its work on behalf of the North Lawndale community. Unemployment there is three times the rate of Chicago as a whole, Palms Barber explains—fueled by the outsize incidence of incarceration.

“Even when people want to turn their lives around, and want to do the right thing, they’re not able to get any traction” in an environment marked by a “lack of will” and policies to hire ex-convicts, she says.

That’s why Sweet Beginnings aims to “take the sting out of re-entry,” Palms Barber says, by showing employers that its graduates are “good people who have made bad choices.” The organization teaches its workers how to produce, inventory, pack and move its honey and beelove products out to retail stores like Mariano’s, Hudson’s at the airports and Whole Foods. They also learn core values like punctuality and self-respect.

“They get a taste of what making honest money is like,” Palms Barber says. “They love working here, and they hate leaving.”

Fewer than 4% of Sweet Beginnings participants go back into the criminal justice system, compared with the national average of more than 65% and the Illinois average of 55%.

The men and women of the current crop of workers agree. Sweet Beginnings is the second job LaTonya Sykes, 46, has ever held. “I was born into a family of drugs. It was all I saw,” she says—and she spent years in prison as a result.

Now Sykes says she’s determined to make a new beginning, and she likes coming to work at Sweet Beginnings.

“I get a laugh” with co-workers, she says, and adds that it’s “fun” working with the bees. She would like to own her own business one day.

Most of Sweet Beginnings’ graduates are working, Palms Barber says. Fewer than 4% go back into the criminal justice system, compared with the national average of more than 65%, and the Illinois average of 55%.

“I’m a phone call away if they need me,” she says.

Beekeeping was an unconventional enterprise for NLEN, Palms Barber acknowledges. But now she thinks it represents a meaningful convergence for the workers: a chance to commune with nature, and the lessons of loyalty, diligence and resilience that the bees themselves provide.

And while she notes that sales of honey alone won’t sustain a commercial enterprise, “a drop of honey” can go a long way toward enriching hand cream or lip balm to create a prestige natural brand, Palms Barber says.