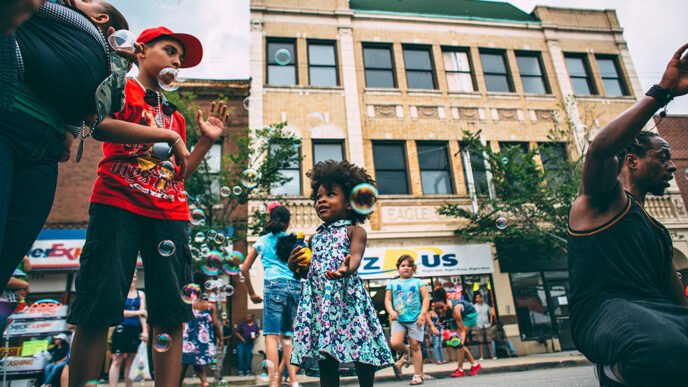 Taking on the Racial Wealth Gap? Isn’t That Risky?

Disinvested neighborhoods. Segregation. Sluggish economic growth. African Americans leaving the Chicago region in droves. All these phenomena are exacerbated when we factor in race, and they have been at the heart of the work to which I’ve dedicated my career.

I have been working in the urban planning and community development fields for almost two decades and became passionate about these issues as I moved around to different cities—from my hometown of Portland, Oregon, to Atlanta, to Los Angeles, to Chicago. These moves changed my frame of reference, highlighting key differences in the ways in which communities were planned and built-environment decisions were made. These moves also highlighted disturbing similarities when it came to community investment policies and practices—from redlining that segregated Black people, to unjust eminent domain that removed housing and businesses, to the negative health impacts of highway placement and other environmentally detrimental land uses, particularly in the communities of color I was raised in, that adopted me and that I have called home.

However, it wasn’t until I was exposed to recent research about our country’s pervasive and growing racial wealth gap that it occurred to me that our extreme racial wealth inequality, and the systems and policies that perpetuate it, are at the root of why these challenges are so pervasive and intractable. And as I’ve begun to present and engage with a variety of people and organizations on this issue, I see how much this divide has served as a rallying call for real structural change.

Our extreme racial wealth inequality, and the systems and policies that perpetuate it, are at the root of why these challenges are so pervasive and intractable. And as I’ve begun to present and engage with a variety of people and organizations on this issue, I see how much this divide has served as a rallying call for real structural change.

The Chicago Community Trust is embarking on an important and formidable 10-plus-year journey to move the needle on closing the growing racial wealth divide in our region. The most conservative national estimates have White household wealth at 10 times that of Black households and eight times that of Latinx households. In Chicago, 65 percent of Black and Latinx households could not go three months without income before falling below the poverty line, in comparison to 28 percent of White households. Racial and economic segregation is costing our region $4.4 billion annually in GDP. These staggering statistics and the direct ramifications of our economic inequality—high crime rates, health disparities, increased disinvestment, sputtering economic growth—spurred the Trust to action.

At the Trust, we believe it is critical to focus on race and wealth. Much attention is paid to income inequality in our country, but income is what comes into a household at a point in time. Wealth is the accumulation of liquid and fixed assets that support families in the case of emergencies; enable college students to get to and through college without being saddled with exorbitant debt; and can be passed down to the next generation to create generational economic mobility. In addition, wealth inequality is also linked to personal power and broader engagement in society. As I see the gap between White households and Black and Latinx households persist, I think about the tremendous implications on our political system, our institutions and our economy that will likely perpetuate a further widening of the gap.

As we have begun to talk about our new strategic focus on closing the racial wealth gap in the Chicago region, the feedback we have received has tended to fall into three categories. The first is tremendous support and eagerness for us to lend our voice and resources to this critical issue. The second is a concern that by focusing on wealth, we will exclude or ignore people who are economically vulnerable. And the third has been a mix of enthusiasm and caution. Can we as a region close the mounting gap? And what can a community foundation really do to address this?

The Chicago Community Trust is at its core a philanthropic organization, and as such, must acknowledge that we sit directly at the nexus of wealth inequality. We support philanthropic giving by thousands of donors representing a wide spectrum of means, while also supporting the organizations and individuals that help and build strength and resiliency with economically vulnerable individuals and communities. And as I’ve taken my personal journey through this process of inquiry, I have concluded that we at the Trust must always be cognizant of where we sit within this relationship. I have been heartened by the response, particularly from those who have wealth in our region. Beyond being open to the strategy, they are eager to see it succeed.

As to the concern for who may be left out, we share this and are conscious of what a change in strategy could mean, particularly for economically vulnerable families. And we will continue to support urgent basic needs in our other work. We also aim to focus on policy and systems change efforts that hold the potential for broad impact for all families in need. Systems and policies are what created our wealth inequality, and only systems and policy change will begin to reduce it.

We recognize that the growing number of economically vulnerable families in the Chicago area need stable and steady income before they have hope of saving and building wealth. That is why we aim to advance policies that expand and improve the Earned Income Tax Credit, ensure better employment practices and regulate predatory financial practices that target low-income households, particularly households of color. It is also why we will continue to support basic needs through our Addressing Critical Needs strategy.

We also aim to focus on policy and systems change efforts that hold the potential for broad impact for all families in need. Systems and policies are what created our wealth inequality, and only systems and policy change will begin to reduce it.

When I contemplate the words of caution—What can The Chicago Community Trust do to close the racial wealth gap?—I think first about the many local leaders and organizations that have been at this for decades without adequate resources or a broad base of allies. I think about groups that have helped families stay in their homes after the foreclosure crisis, saving one of their sole sources of wealth. I think about the organizations that, through research, advocacy and coalition building, have gotten the City of Chicago to identify and reform its fines and fees practices that have been proven to have significant disparate negative impacts on people of color. I think of those who are in Springfield and Washington, D.C., taking on the powerful payday lending industry to restrict its ability to charge 400 percent interest rates, as is the current norm in Illinois. These courageous organizations have been making a difference and need more voices to join in this work.

Racial wealth inequality affects all of us. Of the data we have reviewed, there is one fact that has stuck with me. According to Prosperity Now, “If the racial wealth divide is left unaddressed in the U.S., median Black household wealth is on a path to hit zero by 2053”—about 10 years after racial minorities are projected to comprise the majority of the nation’s population. Median Latinx household wealth is projected to hit zero by 2073.

This means that by 2053, the majority of our population will have or be on a path to no wealth. What will that mean for our economy?

I appreciate the important words of caution and recognize that the complexity of this work and the need to tackle it head on now may seem daunting—while readily acknowledging the reality. We believe that together, we can create a future where the majority of our population is economically secure, where they own and have more agency in their communities, where our Chicago region is seen as a model for a thriving and inclusive economy that attracts and fosters talent and opportunity for our diversity of residents, not just a privileged few.