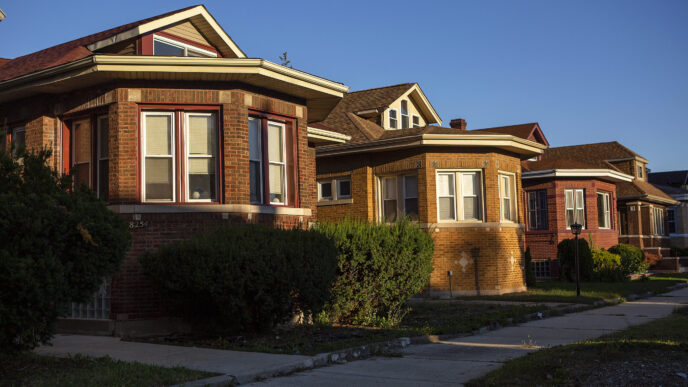 A “profound” federal rule enacted more than 40 years ago to ensure financial institutions invest in and build wealth in the communities they serve is being rethought—and we need to ensure it is rethought in a way that doesn’t weaken it, but instead improves equity in Black and Latinx communities. Strengthening the Community Reinvestment Act (CRA) is one of the Trust’s top policy priorities. The regulation already generates significant community investment, and with key reforms, it will have even greater potential to close the racial and ethnic wealth gap.

Since Congress approved the CRA in 1977, it has helped bring more than $100 billion in capital each year, supporting “a network of innovation in community development,” said Joanna Trotter, senior director of community impact for the Trust. “Because of the CRA, banks have an incentive to invest in institutions rooted in the communities they serve, and communities are better able to hold banks accountable for investing in the places where they’ve received their deposits.”

The CRA originated in response to “redlining,” the systematic denial of home mortgage and small business lending in low- and moderate-income communities and communities of color. Organizers in Chicago, led by Austin resident Gail Cincotta, birthed and led the national movement that ultimately succeeded in banning redlining and passing the CRA.

Today, Chicago advocates and policymakers are taking up their mantle. While the CRA has accomplished much good, racial inequities in household wealth and community investment continue to grow, strongly indicating that there’s more work to be done.

“CRA has made a difference,” said Sharon Legenza, executive director, Housing Action Illinois, which with the Woodstock Institute co-leads the Trust-funded CRA Coalition. “But is it enough? No, because it’s not changing the fundamental landscape.”

For example, a report last summer by WBEZ and City Bureau showed that banks and mortgage companies provided more home loans in one of Chicago’s North Side white neighborhoods than in all of the city’s predominantly Black communities combined. The Trust and numerous grantees of our Coalitions for Equity in Wealth Policy program are working together and with national partners to permanently shift that dynamic.

Reformers are seeking greater data transparency and accountability requirements to enable communities to understand and measure better whether financial institutions are or are not meeting local lending and investment needs. Helen Murray, who advocated for the CRA’s establishment in the ’70s with Cincotta at National People’s Action, reflected on the critical role of data in empowering organizers.

“Back then, we knew darn well, anecdotally, that banks were defining some communities as ‘unlendable’ because of the population of the people, whether low- or moderate-income or people of color,” said Murray. “Once we were able to get Census tract-level data, we could see a lot of specific lending behavior to show that this was a national pattern, and we began to pull people together and activate lobbying pressure in places around the country.”

Today, ongoing discussions at the federal level are considering proposals to revise the CRA. Advocates are seizing the moment to recommend improved accountability measures to hold financial institutions to the original law’s full intent. For example, this February, the Trust joined with Chicago-based philanthropies the Conant Foundation, Polk Bros. Foundation, Wieboldt Foundation, and Woods Fund Chicago to send official comment [post and link to letter]to the Federal Reserve Board—one of three agencies with CRA oversight—underscoring why banks should be required to report lending data and community feedback to CRA scorers.

“We are confident that banks collect such data and believe that providing it to CRA examiners is not burdensome, but rather an essential duty in serving the communities in which they operate,” the letter stated. “Furthermore, we suggest that community feedback be incorporated as a critical input into an institution’s final [CRA] rating. Banks have a duty to serve and be accountable for meeting the needs of the communities from which they profit.”

The CRA Coalition and organizations like the Spanish Coalition for Housing are also recommending ways CRA investments and other bank activities can better meet community needs. One key factor to address is that the banking and lending landscapes have changed dramatically since the 1970s, when most communities had a neighborhood bank with a local loan officer and offered affordable home and small business loans.

Today, as Murray noted, many people get a loan by “chatting with a robot online.” When lending becomes less localized, even the kinds of investments change: Lending goes to larger, easy–to–finance projects and away from individuals, small businesses, and homeowners. Bank conglomeration and the advent of digital lending is one reason why the CRA Coalition led a statewide movement to establish an Illinois CRA, approved by the Illinois General Assembly in January 2021 and currently being considered by Gov. J.B. Pritzker to sign into law. The state rule will help provide oversight for state-regulated financial institutions not covered by the CRA, including state-chartered banks, savings banks, credit unions, and larger residential mortgage brokers.

Advocates also hope that the addition of state oversight and, ultimately, changes to the federal rule will address prominent banking disparities. Many low-income communities of color are “underbanked” and don’t even have a brick-and-mortar bank branch in the neighborhood. Advocates want to see financial institutions address this issue, as well as invest more in public education so that people can become credit-ready and know their options.

“In this world, we’ve gotten away from the personal relationship. It’s expensive to have high-touch relationships with individuals with lower incomes,” said Legenza. “But when we consider why we’ve fallen short of the goals of the CRA, I think we need to consider the level of service banks are providing to people in low-income communities.”

Joseph Lopez, executive director, Spanish Coalition for Housing, agrees. His organization, and many others like it, were established soon after the CRA. They work hand-in-hand with residents and banks to provide housing and credit counseling and build the financial health and readiness of first-time homebuyers, renters, and landlords.

“When banks are committed to community investment, you can see their on-the-ground commitment,” said Lopez. “They have loan officers who live in, work in, and speak the languages spoken in the communities they serve. They are cognizant of partnering with groups like [Spanish Coalition for Housing] to help people become mortgage ready. And they provide affordable lending products, and make sure those products are understood.”

“We can talk about the CRA regulations and recalibrating the rating system all day long,” Lopez added. “At the end of the day, you have to start at the ground level: ensuring community organizations are supported to get good information to the community and that affordable lending products are available.”

As federal discussions on the Community Reinvestment Act continue, learn more and stay up to date on opportunities to provide public comment through Housing Action Illinois’ newsletter.