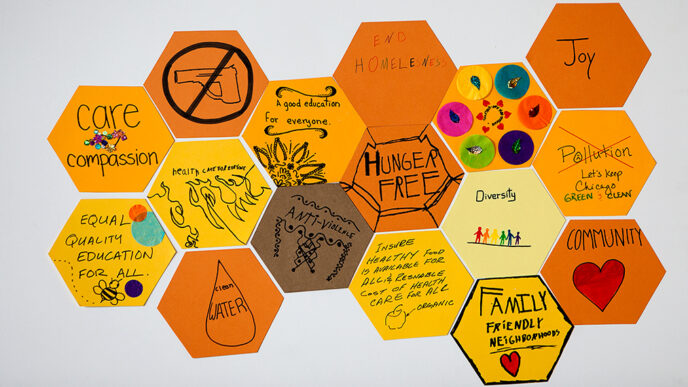 Seven Tables, One Passion for the Place We Call Home

It would be impossible for anyone to experience all of those table discussions. But I can share an insider look at the seven On the Table events I was honored to attend this year.

On May 7, the Honeycomb Project hosted 2016’s first On the Table at the Jeanne Gang Boathouse in the Avondale neighborhood. Family-oriented issues of community, equity and inclusion were the focus of the table discussions. This was also a great opportunity for me to see the new Host Guide for family discussions put to use.

At the Chicago Urban League, 200 residents gathered in small groups to talk about effectively and respectfully serving our most disadvantaged communities—with a Chicago Police officer at every table.

On May 9, Chicago Urban League hosted an On The Table in their Bronzeville offices, as part of their Centennial of Service celebration. This was a gathering of 200 people that included representatives from the Chicago Police Department—including Superintendent Eddie Johnson—at every table, sharing conversations that focused on serving disadvantaged communities.

May 10 began with the Trust’s breakfast at Jane Addams Hull House. Trust president Terry Mazany, 50 local community leaders and members of the Chicago Police Department came together to talk about how to improve relationships between the police and the communities they serve. My table of 10 had a lively but respectful conversation about current and past relationships between communities and the police department.

From there, I went to the Chicago Votes-hosted discussion at the African-American owned Batter & Berries, in Lincoln Park. The restaurant is so popular that it was filled to capacity at a 10:00 a.m. on a Tuesday—but they still found space for 15 of us to have a dynamic discussion on race, equity and how we can build bridges between communities to work toward a more equitable Chicago.

Whatever background people come from, and no matter the community where we live, we are all equally passionate about this place that we call home.

I dropped in on a conversation at the West Englewood library on West 63rd Street, where local residents talked about the essential role that the library and Kennedy-King College play within the community.

Next, I joined Reach Within Ministry, SECC, and Woodlawn youth and seniors for an intergenerational discussion on ways we can improve our community. They had named their event “Bridging the Gap,” as there is significant interest from the older members of the community to meet the younger people who were getting involved in community events.

Finally, I attended the Metropolitan Pier and Expo Authority (MPEA) table discussion at McCormick Place West. Guests included residents from neighboring communities of Chinatown, Bronzeville and the Prairie District, as well as MPEA staff and vendors. This 200-seat “king’s table” was split into 25 small groups of eight to focus on discussing the area’s concerns.

My table had a lively discussion ranging from taxing policy and parking, to the possible fate of the Lucas Museum. We did not all agree on the solutions but it was a vibrant and respectful dialogue.

“Bridging the Gap” was the theme of a conversation in Woodlawn which united neighbors of every generation to connect and understand one another more deeply.

All of the events I attended during those few days left me with the impression that whatever background people come from, and no matter the community where we live, we are all equally passionate about this place that we call home.

We are already receiving encouraging feedback from this year’s On the Table. We conducted a same-day text poll and we heard from attendees that:

On the rooftop of McCormick Square, employees and local residents went deep on the issues facing their neighborhood—from tax policy to the fate of the Lucas Museum.

With such great response and early results from On the Table in 2016, we can’t wait to carry the momentum into this year’s Acting Up awards. This summer, the Trust will award $1,000 grants to 50 On the Table participants selected by judges from Goodcity, to make the best ideas from their tables happen.