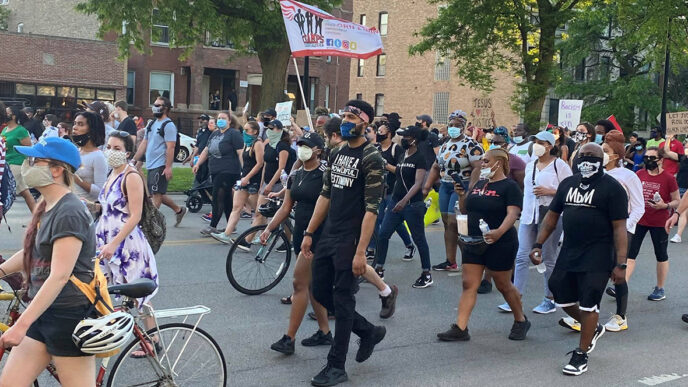 Bronzeville. A march for peace and racial justice.

Series Recap: The Past, Present, and Future of Policing in Chicago

Towards the end of 2020, The Chicago Community Trust and  Illinois Justice Project co-hosted, The Past, Present, and Future of Policing in Chicago, a four-part series that explored  the history of policing in Chicago, the culture of policing, Chicago’s Consent Decree, and community-driven solutions. The series was intended to sustain ongoing dialogue generated by public calls for police reform in the aftermath of the deaths of George Floyd and Breonna Taylor, and bring together the expertise of community leaders, researchers, advocates, and policymakers to identify tangible  police reform solutions.

Below, you can watch full conversations from the series:

Part I: A History of Policing in Chicago and Its Role in the Racial and Ethnic Wealth Gap

Chicago has long grappled with the relationship between law enforcement and communities of color.  Issues around policing communities of color and the criminal justice system arguably are linked to the economic struggles felt in the same communities as contributing factors to the region’s racial and ethnic wealth gap. This panel provides an overview of the history of policing and accountability efforts in Chicago and illustrates how they affect the wealth gap and other disparities.

The system of policing is shaped by institutions, institutional practices and norms formed over generations. Police reform requires buy-in from all levels and stakeholders of the Chicago Police Department, including the Chicago Fraternal Order of the Police (FOP), Lodge 7, CPD leadership and rank and file officers. This panel explores police culture and the potential for training and reform efforts to improve police-community relations, and accountability measures to transform the system of policing to achieve just policing and safe communities.

Part III: The Laws that Govern: The Consent Decree and Other Policies, Principles and Perspectives Guiding Policing

To mandate more police accountability in Chicago, in 2019, a federal judge approved the Chicago Police Consent Decree, a court order that established an enforceable plan of police reform in Chicago. At the national level, the conversation has turned to two powerful provisions that shield police from accountability for perpetrating violence: qualified immunity and use of force clauses. This discussion centered on the Consent Decree and its potential to bring about change, as well as explored how qualified immunity and use of force clauses affect policing.

Protests across the country have ignited calls for change and most notably, defunding the police. Calls for reform range from a full dismantling of police forces replaced by a model of community-led public safety initiatives to a budgetary downshift that would funnel dollars back to communities most affected by historically unlawful policing. This panel discussed what it means to “defund,” “reimagine” and “redefine” public safety, and the opportunities and challenges for police reform.