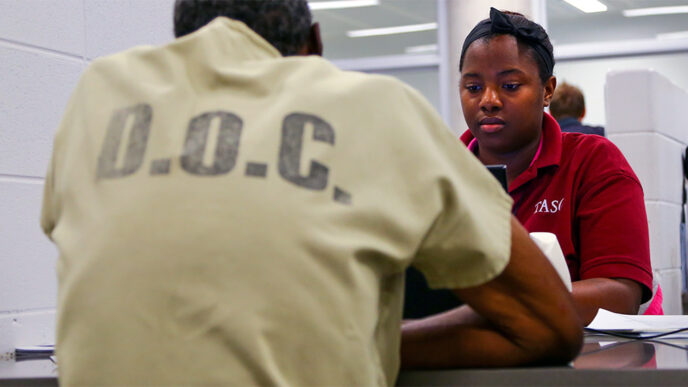 Debra, 32, hadn’t had medical insurance for a while when she was detained at Cook County Jail in 2014 after her arrest for retail theft. But that soon changed.

“When you go through processing, they ask if you have insurance,” says Debra (not her real name), who didn’t spend time in jail after that arrest but had been incarcerated in the past. “My insurance had lapsed, so I signed up. It was easy.”

She used her insurance right away, purchasing eyeglasses and filling a prescription to treat her bipolar disorder. “I’m content having the county insurance,” Debra says. “If I don’t have insurance, I can’t afford the meds.”

Debra is one of more than 12,000 people who have obtained medical insurance at Cook County Jail since 2012 as part of the Justice and Health Initiative, which got its start with leadership from the nonprofit Treatment Alternatives for Safe Communities (TASC) and funding from The Chicago Community Trust.

With the passage of the Affordable Care Act in 2010, many working in Chicago’s criminal justice system saw a rare chance to make long-term, quality health care available to tens of thousands of people: those who pass through Cook County Jail every year.

Before the ACA, only 1 in 10 had coverage. A combination of circumstances suddenly made it feasible to try to raise that number to 9 in 10: a waiver that allowed Cook County to get a year’s head start on expanding Medicaid to include single adults; a willingness among all the disparate shareholders to work together; and TASC’s commitment to lead the planning group that formed the Justice and Health Initiative, or JHI.

“The Trust deserves credit for being the first to invest in this,” says
Pamela Rodriguez, president and CEO of TASC, which coordinates health services and advocates for people in the justice system.

The Hon. Paul P. Biebel, at the time presiding judge of the Criminal Division of the Cook County Circuit Court, convened the planning group in 2012 that became the JHI. It included representatives from the State’s Attorney’s office, the Sheriff’s office, Cook County Health and Hospital System (which oversees Medicaid) and other stakeholders.

In Illinois, Medicaid had not previously covered single adults without minor children. Incarcerated individuals, more than 80 percent of them men, receive federally mandated health care services. However, when people left Cook County Jail, treatment stopped for most of them unless they had private health insurance.

While foes of the ACA worked to dismantle the law, the JHI used it to build an infrastructure for this vulnerable population to acquire health care.

The JHI partners moved swiftly to use the jail itself as the venue for enrolling people in the newly expanded Medicaid coverage. They decided intake at the jail was the best place for enrollment because there people like Debra would make bond and leave, perhaps never to return. Cook County Health and Hospital System worked with the jail to re-engineer the intake procedures.

While opponents of the Affordable Care Act worked to dismantle the law, a group of health and justice system leaders used it to build an infrastructure for a vulnerable population to acquire health care.

“It is a complicated, high-volume process with a finely tuned protocol,” Rodriguez says. “At intake, you got one shot at everybody.”

The effort worked. As of September 2015, more than 12,000 people, mostly underserved single men, had obtained medical insurance after applying for it at the jail.

Large counties across the country are now studying the JHI. Rodriguez credits several factors to the program’s success: A powerful convener like Biebel ensured that the JHI partners remained engaged. A strict deadline to get enrollment underway in a year kept everyone focused. Solid financial support from the Trust and other foundations demonstrated to prospective funders the value and impact of the project. And participants with decision-making authority and strong support from elected officials were also key as they worked together to implement specific goals, such as their crucial consensus decision to enroll people at the jail’s intake point.

When Rodriguez meets with community and government leaders about the JHI, they are intrigued by how the Trust’s local investment in the program seems to be having a national impact on health care. “It’s a remarkable investment that has leveraged so much additional attention and funding,” she says.