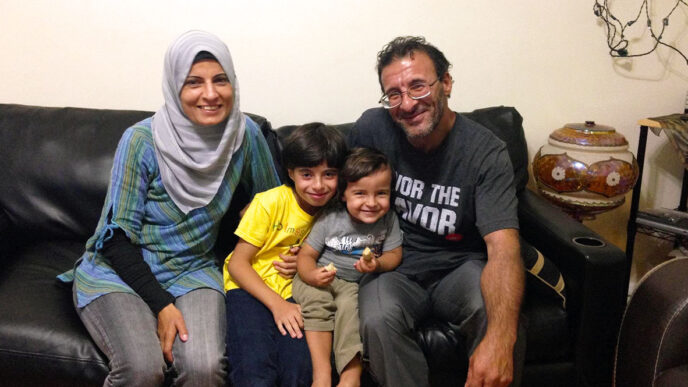 ­Fatima Adris with her husband Fadi and their two sons Abdel Hamid (left) and Osama. “This is our home now

Seeking Refuge from War in Syria, Families Find a Home in Chicago

The violent civil war in Syria has driven more than 11 million people from their homes. While many have sought refuge in any European country that will take them, more than 60 refugees have settled in Chicago this year and many more are expected.

Suzanne Akras Shaoul wants to be ready for them. She recently quit her full-time job to start the Syrian Community Network.

On this episode of “Volunteer: Stories of Philanthropy,” reporter Christopher Johnson speaks with one of the families that Suzanne has helped resettle in Chicago. Their journey began six months ago when they traveled from their home in Syria to Lebanon, then to Germany, New York and finally to Chicago. The family has finally settled into an apartment in West Ridge, and the city has started to feel like home thanks to the Syrian Community Network.

Suzanne Akras Sahloul, left, runs the Syrian Community Network, which helps refugees fleeing the civil war resettle in Chicago. “I’m not doing anyone a favor. I’m doing myself a favor,” she says. “When you volunteer, you should be grateful for the opportunity—because you’re helping yourself.”