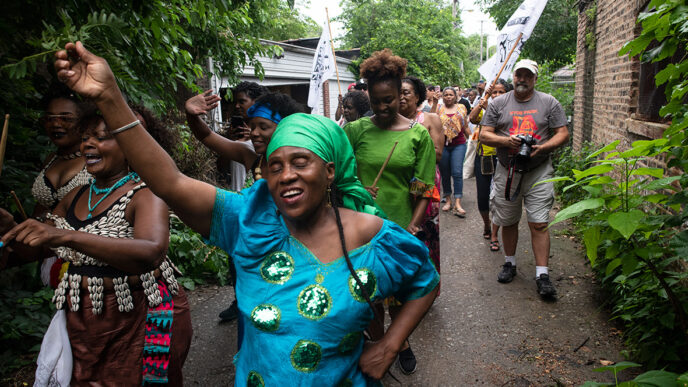 An opening procession of musicians

Saturday Afternoon Backyard Jazz, Just Like the South Side Used to Do

[pullquote]Decades ago, #jazz musicians met up in South Side alleys for afternoon jam sessions that brought neighbors out to dance, eat and socialize – now a community event from @HPJazzFest revives that #Chicago tradition[/pullquote]

By seven o’clock in the evening on a muggy Saturday in July, the backyard of Zenja Vaughn’s house at 7343 S. Paxton was filled to capacity. Visitors brought lawn chairs and coolers, or balanced plates of jerk chicken and ribs from a food truck on their knees as they waited, eyes fixed on the concrete parking pad. Folks who didn’t fit crammed into the alley to watch through the open gate, or peered over the fence from the house next door. The attraction, the headliner of the day’s Back Alley Jazz festival, was vocalist Maggie Brown and her ensemble.

As emcee Richard Steele had said earlier in the day, announcing a performance by Mikel Patrick Avery and his quartet: “To have an event like this in your backyard? That’s a big thing!”

In the late 1950s, ’60s and ’70s, residents of Chicago’s South Side neighborhoods would spend Sunday afternoons gathered in alleyways to listen to live music from local and visiting jazz musicians jamming together. On July 14, a one-day event reignited that tradition to bring the neighborhood together again.

Back Alley Jazz took place July 14 in South Shore, in the backyards of four homes on the 7300 block of South Paxton. The free event, supported by a grant from The Chicago Community Trust, was modeled on the historic Alley Jazz events that took place on the South Side in the 1950s, 60s and 70s. Then, greats like Jimmy Ellis and Oscar Brown Jr., Maggie’s father, would gather for Sunday afternoon jams in a garage and the whole neighborhood would come out to listen, eat barbecue and catch up with old friends.

The tradition continues today in events like the Universal Alley Jazz Jam. But in 2016, artists Fo Wilson and Norman Teague, who together run BlkHaUs Studios, pitched a version of the idea that incorporated visual and multimedia arts as part of the annual Hyde Park Jazz Festival.

Chicago legend Jimmy Ellis and his saxophone were regular fixtures of the neighborhood’s original jazz afternoon tradition. This year he led the performers in an opening procession through those same alleys to the Back Alley Jazz event.

“I immediately absolutely loved the idea,” says festival executive and artistic director Kate Dumbleton. “But it was not right for what I was actually doing for the festival itself. So I asked if we could have a conversation about doing it a different site, in a neighborhood that was appropriate.” After a long research process, they kept coming back to South Shore.

“There’s already community building going on here, but not the kind of change that was going to displace people,” says Wilson. “There’s a lot of energy for change coming from the neighborhood.”

After “hundreds of hours of planning,” according to Hyde Park Jazz Festival’s executive and artistic director Kate Dumbleton, Back Alley Jazz drew standing-room-only crowds to four backyards along South Paxton Street, where jazz bands and dance performers lit up the afternoon.

In the summer of 2017 Zenja Vaughn, a friend of Teague’s who’s lived on Paxton for 18 years, invited 30 or 40 neighbors and local business owners over for a barbecue in her backyard. “For me,” Vaughn says, “music is the unifier of socioeconomics, race, class—so I thought, we’ve got to bring this to South Shore. I organized my neighbors to say, ‘Are you in? I don’t want to do this alone.’”

They were in. Though a few worried about crowds and security, the skeptics were won over after a lengthy series of meetings and conversations with 5th Ward alderman Leslie Hairston and 7th Ward alderman Gregory Mitchell, whose wards split the block. It took “hundreds of hours of planning,” remembers Dumbleton—both to hash out the logistics, and to do the deeper work of building relationships with the community. But on the day in question it went off almost without a hitch.

With the street blocked off, residents and visitors from outside the neighborhood were free to wander, or stop at one of the gingham-covered tables for a snack. The Hyde Park Art Center demonstrated silkscreening, while School of the Art Institute students staffed a “Learning Lab” on the history of Alley Jazz, featuring stunning photographs shot back in the day by Jimmy Ellis. Black and white flags flapped gently in the breeze outside the four participating houses, each of which had been curated by a musician, a designer and a visual artist working as a team.

At 7337 S. Paxton, Mikel Patrick Avery (left) and members of his quartet Anthony Bruno and Ben Lamar Gay were joined by dancers from Sydney Chatman and the Fly Girls.

To access the first performance at 7330 South Paxton, for example, guests had to enter through a latticed portal installed for the event. In the yard, drummers and dancers Bomba con Buya and Uche Omoniyi performed, complete with a masked stilt dancer for a dramatic finale. Both the portal and the inclusion of bomba, noted Dumbleton, were a nod to the African diaspora and its influence on jazz—“the folk traditions that cross over with the improvisatory traditions of Afro-influenced music.”

At 4 p.m. in the backyard at 7337 South Paxton, home of the Lomax family, Mikel Patrick Avery’s quartet jammed while Sydney Chatman and the Fly Girls—a troupe of women and girls outfitted with rainbow taffeta and metallic lamé headdresses—danced and chanted an ode to strong black women:

At 7326 S. Paxton, saxophonist and composer Greg Ward and his trio collaborated with dancer Jumaane Taylor on an original performance inspired by the history of the South Shore neighborhood and the beauty of hosts Jonita and Jeannine Sharpe’s home.

And at 5:30 in the yard at 7326 South Paxton, in the shade of five towering linden trees, saxophonist Greg Ward performed with his trio, along with tap dancer Jumaane Taylor and poet Preston Jackson. Homeowner Jeannine Sharpe, who’s lived there since 1969, watched from a prime spot on the porch with friends and family. “We’re just having a great time,” she said. “This has been wonderful.”

“We always have to drive outside our neighborhood for things like this,” said Zenja Vaughn, “so it’s good to have it on your block for once.”

And then it was time for the headliner. By then as many as 300 people had gathered. Steele stepped up to the mic in Vaughn’s yard to introduce Maggie Brown, with a short and sweet speech about the power of storytelling. And then Brown herself, luminous in pink pants and a lacy white top, launched into one of her father’s standards, “From My Window.”

Vocalist Maggie Brown capped off the evening with a call-and-response performance that drew participation from the crowd of hundreds packing the backyard at 7343 S. Paxton. Brown followed in the footsteps of her father, singer/songwriter Oscar Brown Jr., who was a regular at the original alley jazz sessions decades before.

Unbeknownst to the crowd in thrall to the music, only blocks from where they sat, Harith Augustus had just been shot and killed by Chicago police.

One of Back Alley Jazz’s overarching goals is to elevate an alternative narrative about an community weighed down by disinvestment, violence and racism. The pain and conflict unfolding at 71st and Jeffery that night rang in bitter counterpoint to the joy and fellowship on Paxton Street.

Homeowner Jeannine Sharpe has lived at 7326 South Paxton since 1969. Watching the day’s performances with her family, Sharpe said, “We’re just having a great time. This has been wonderful.”

People always ask about sustainability, said Dumbleton. How do you keep something like this going over time?

“In my mind,” she said, “what would be super cool would be if people said, ‘This is so cool, I want to do it in my neighborhood,’ and maybe one day in two years there are five of these, one in North Lawndale and one here and one somewhere else… It’s all about combining artistic excellence with a community setting.”

Although Back Alley Jazz was conceived as a one-day community event, Kate Dumbleton can imagine the possibilities “if people said, ‘This is so cool, I want to do it in my neighborhood,’ and maybe one day in two years there are five of these, one in North Lawndale and one here and one somewhere else… It’s all about combining artistic excellence with a community setting,” Dumbleton said. All photos by Marc Monaghan.