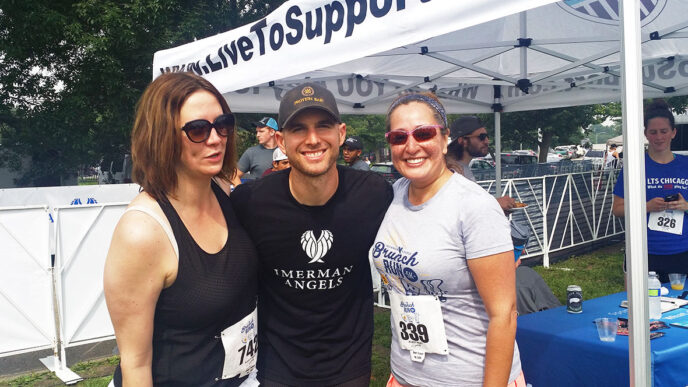 Runner Finds a New Path as a Mentor for Cancer Survivors

Running has been an integral part of Janett Ortiz’s life for years, and has seen her through some of the toughest times of every part of her life—including her fight with cancer. She would tell you, though, that when it comes to healing body and mind, talking is just as important as running.

Like many people, Ortiz “came from a background where cancer isn’t something you talk about.” When she encountered Imerman Angels, a one-on-one support network for cancer fighters, survivors and caregivers, she discovered a place where “everyone wants to hear your story.”

“The more I did, the more I found I could talk.”

[pullquote]“Being able to say to someone, ‘I can help with that’”: Runner Janett Ortiz on mentoring cancer survivors[/pullquote]

Ortiz’s mother had been diagnosed with cancer in 2010. Then in 2012 her own fight began, as she was diagnosed with stage two thyroid cancer. Training for the Chicago Half-Marathon provided her a sense of focus during treatment; but she was still aware of something missing. Fortunate to have the support of friends and family who were crucial to her recovery, Ortiz still felt “very lonely and isolated going through radiation.”

Ortiz discovered Imerman Angels almost by accident in 2015. “I was registering for the Shamrock Shuffle, and Imerman Angels was one of the charities sponsoring the race,” she recalls.

At first Ortiz only planned to train with their team. But after an injury derailed her training plan, she looked at their website and realized “they do a lot more than races.” When she learned about their mentoring program for cancer survivors, “it just clicked.”

Ortiz discovered what had been missing during her recovery. She describes it as being “like when you meet someone for the first time and have an instant connection, without hesitation.”

At one of her first meetings, she met volunteer community and outreach coordinator Jackie Herigodt, who immediately matched her with volunteer opportunities. Ortiz remembers initially being “nervous about reactions from patients coming out of their treatment,” but Herigodt’s “openness and passion to help” put her at ease.

Shortly after, Herigodt recruited Oritz to speak at the American Society of Neuroradiology (ASNR) symposium alongside medical professionals—including Ortiz’s own doctor. She was hesitant at first, but when she spoke, she found that people wanted to listen.

Today Janett Ortiz finds joy in working as a mentor for Imerman Angels. Through this experience, she has discovered that volunteer service is something that “you need as much as the person you’re helping.”

Ortiz describes volunteering for a cause with personal meaning as “finding your purpose, your happy space… It really is as simple as being able to say to someone, ‘I can help with that.’”