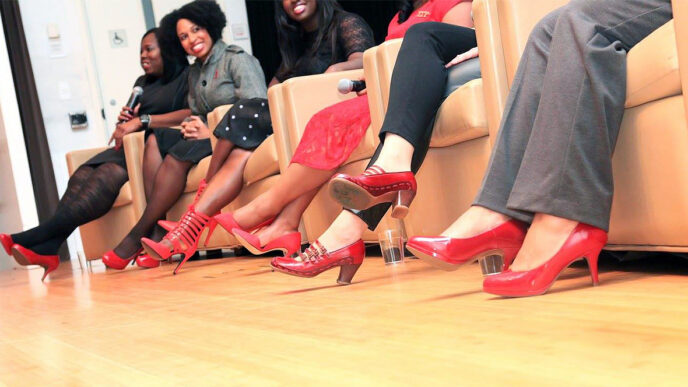 Lovette ‘Luvvie’ Ajayi and Karyn Brianne Lee are marketing and social media mavens. Ajayi is a digital strategist, public speaker and high-profile blogger, while Lee works in top-tier healthcare and consumer communications. And together, they have channeled that expertise into action through The Red Pump Project, a national organization raising awareness about the impact of HIV/AIDS on women and girls.

It all started with a few instant messages.

“Luvvie and I were both passionate about HIV/AIDS awareness. We wanted to do something that targeted women and girls,” says Lee. “We felt like the conversations around HIV prevention had slowed down even though the virus was still impacting women, especially African-American women, but we didn’t think anyone was focusing on that.”

“We knew we wanted to incorporate fashion and social media,” adds Ajayi. “I had toyed with the idea of hosting a Red Shoe Ball for years. It would focus on awareness and a portion of the event proceeds would be donated to an HIV/AIDS organization. We kept chatting and eventually came up with the Rock the Red Pump Campaign.”

The pair reached out to 50 bloggers on March 2, 2009, asking them to #RocktheRedPump on March 10, National Women and Girls HIV/AIDS Awareness Day. Within eight days, 125 bloggers had agreed to participate, sharing photos of themselves in eye-catching red shoes designed to make an impression and start conversation about a topic that’s too often kept quiet.

“Then emails started coming: ‘Where are you going with this?’ and ‘Can you come speak at our school?’ That’s when we realized we had to turn this into something more,” says Lee.

Today, over 2,500 bloggers have participated in the organization’s signature social media campaigns. The 2015 campaign served up 4.2 million impressions and reached 1.3 million accounts across various social platforms.

And The Red Pump Project has expanded into a real-world nonprofit organization with ambassadors in Chicago, New York, Atlanta, Charlotte, Dallas and Washington, DC. The organization reaches women and girls across the country through a variety of attention-getting events, from fashion shows to brunch conversations to town halls. The goal is always to get people talking.

“People are so afraid of talking about this virus and this disease,” says Ajayi. “We live in a very sexual world but people aren’t comfortable talking about sex. You can’t talk about HIV/AIDS with your partner… but they’ve seen you naked.”

The pair readily points out that the growing HIV infection rate in communities of color is symptomatic of a much bigger problem.

“Where you live can impact your risk,” says Lee. “Some people have survival sex. They’re putting themselves at risk because they need to survive. This issue touches on socio-economic status, access to care and self-esteem.”

“In the African-American community especially, we don’t talk about it,” adds Lee. “If three in five African Americans know someone living with HIV or AIDS, or who has passed away from this disease, there should be no secrecy.”