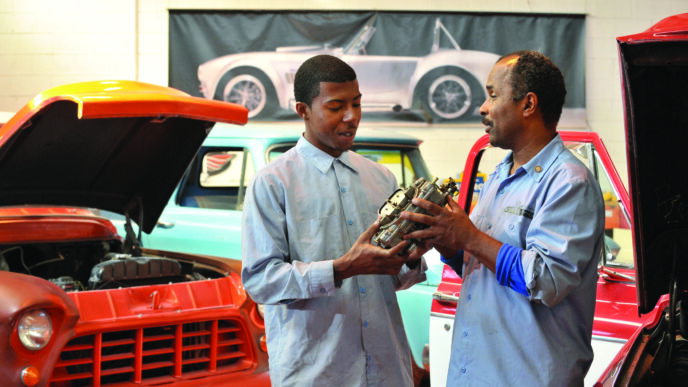 Q and A: Behind the Wheel with Alex Levesque

Alex Levesque goes above and beyond as the founder of Automotive Mentoring Group, a nonprofit that mentors young men and women who have fallen into gang violence by teaching them the art of restoring classic muscle cars and motorcycles from the midcentury. He works at the Bedford Park, Ill.-based nonprofit seven days a week. That includes driving around in some of the most dangerous neighborhoods in the South and West Sides of Chicago to recruit gang members into his program to teach them the life and work skills they need to make better lives for themselves.

It can be exhausting and draining at times, but you wouldn’t know it talking to Levesque, who always has a smile on his face and an upbeat attitude. “It’s my life’s work,” he says.

Levesque has a lot to look forward. With grants from the Trust and other nonprofits in the region, he is working to strengthen AMG so it can be expanded to other cities in the country. He is bolstering AMG’s capacity and infrastructure, meeting with donors and nonprofits to promote the impact of the program and raise funds for it, and making capital investments, including upgrading the program’s automotive equipment. We caught up with Levesque to talk about the important role philanthropy has played at AMG and his own life.

What does philanthropy mean to you?

How did you learn about philanthropy? Was it instilled in you growing up?

It was definitely not something that was instilled me and passed through my family. It was just sort of a god-given instinct—just something that was put on my heart to see how you could be of service even in the smallest way. And I’m still learning about it. The whole philosophy and idea is much bigger than I realized. Being involved with The Chicago Community Trust, the Springboard Foundation and even the Chicago Police Department, it is always a continual education. I’m learning a lot more and just how big it is and how big people’s hearts can be. I think we just all have an obligation. We cannot just be selfish.

What inspires you about Automotive Mentoring Group and the kids you work with?

What inspires me is that I know that the seeds that I plant today in the majority of cases it has changed or will change lives forever. And that’s what I’m interested in. I’m interested in long-term, permanent, positive change.

These black and brown communities have a really serious, horrible culture of violence and that’s because those seeds were implanted way, way back when. It doesn’t matter what kinds of laws you pass. If you don’t change the way [at-risk youth] think, then you’re not going to be able to change what they do. And you change the way they think by exposure. You give them as much exposure to the world as possible and let them see how big it is and what all the possibilities are, so that they can dream and think about that change–so that they can know that anything is possible.