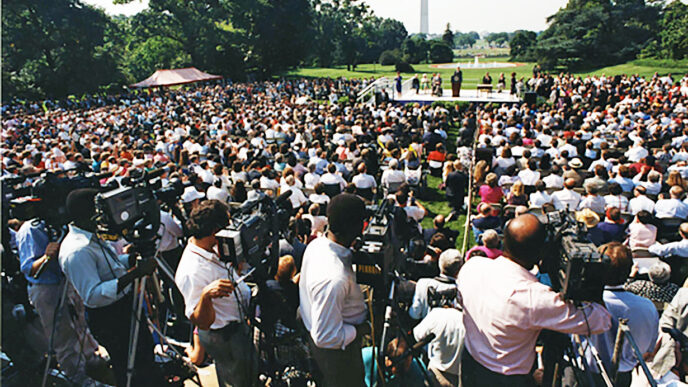 As part of the Wheels of Justice campaign, ADAPT advocates marched to the United States Capitol. Participants ditched their wheelchairs and crawled up the Capitol steps, according to Michael Winters, “to show the country what kinds of things people with disabilities have to face on a day-to-day basis.” Photo by Tom Olin.

Though a monumental feat was accomplished, nothing about passage of the law was easy. There were barriers at every step of the way. Despite the fact that there were no curb cuts, no access to bathrooms, no interstate TTY system of communication for people who were deaf and hard of hearing, no emergency captioning and employers were free to discriminate based upon disability, Congress did not believe there was a history of discrimination. Without a history of discrimination, there would be no law.

In 1990, after marching from the White House to the U.S. Capitol, Justin Dart, Jr. addresses members of the Wheels of Justice campaign, including advocates from around the country. Photo by Tom Olin.

Mobilizing the disability community, Justin Dart, Jr., Vice Chair of the National Council on Disability and the Martin Luther King of the Disability Rights Movement, issued a call to action. Dart urged us to tell the world what discrimination looks like. Dart and his wife Yoshiko traveled around all 50 states collecting individual stories of discrimination.

The community answered the call, giving Justin three large trash bags worth of testimonials, which he delivered during his testimony to Congress. As Former Congressman Tony Coehlo said, in order to establish a record of discrimination, “we had to share the scar tissue of our lives, so Congress would understand how rampant discrimination was across our lives.”

The Wheels of Justice campaign advances toward the U.S. Capitol Building. Photo by Tom Olin.

Here we see the Wheels of Justice campaign march winding its from the White House to the U.S. Capitol Building. Photo by Tom Olin.

However, while there has been success, the promise of the Americans with Disabilities Act has not been realized in many ways. Just as millions of young people have never known a world without screen readers and bus lifts thanks to the successes of the ADA, they also have witnessed the deficiencies and never known a world without catastrophically high unemployment rates for people with disabilities (less than 35 percent of working age Illinoisans with disabilities are employed), without significant achievement gaps between disabled and non-disabled students, and without unnecessary institutionalization of people with disabilities.

Three years after passage of the historic civil rights law, disability leaders march down Madison Avenue in support of the ADA. This march came on the heels of several presidential appointments, including Marca Bristo as Chair of the National Council on Disability, Paul Miller as White House Personnel Point Person and Judy Heumann as Assistant Secretary for OSERS. The banner in this photo, created by the Darts and carried in this photo by Yoshiko and Kyoko Dart, makes the connection between civil rights and disability rights. Photo by Tom Olin.

The anniversary gives us a platform to bring varied segments of our community together for a common goal. In Chicago, under the banner of ADA 25 Chicago, more than 160 organizations from the private, public and non-profit sector have committed to leveraging this 25th anniversary year to create more opportunities and make systemic change in education, employment, technology and community inclusion. With initiatives like this in Chicago and around the country, the full promise of the Americans with Disabilities Act will happen.

Around the world, the Americans with Disabilities Act is the model other countries follow when building a system of human rights protections for people with disabilities. The implementation, enforcement and model of the law have launched a paradigm shift with momentum that will not be reversed. This year, and in years to come, we will ride that momentum, filling in the gaps that still exist, fighting against the barriers that remain, ensuring that the promise of the law applies to all people with disabilities and extends to all sectors of society.

This article was originally drafted for a guest post on Disability.gov.