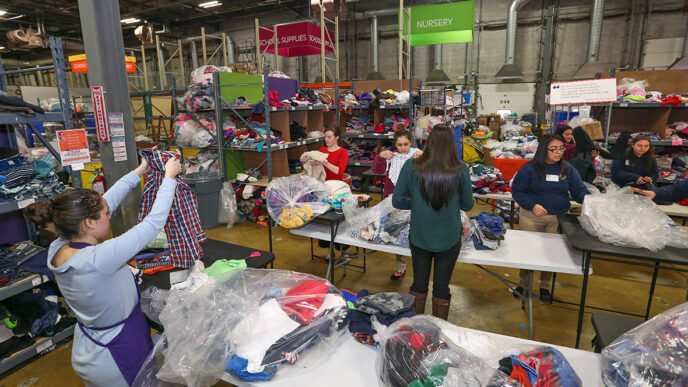 Providing Chicago’s Kids with Clothes, Toys—and Something to Be Proud Of

Bright blue and yellow bins stretch in every direction across the floor of a warehouse on Chicago’s Northwest side. “Boys long pants”; “Girls dresses and skirts”; “Boys and girls baby clothes” read signs on each bin. In the center, a team of volunteers pick through gently used garments to check for stains, holes and odors before adding them to the appropriate bin.

This is the Cradles to Crayons Chicago Giving Factory, a 2,200-square-foot warehouse in the former Marshall Fields complex in Logan Square. Founded in Boston in 2002, Cradles to Crayons provides low-income children with everyday items—clothes, school supplies and toys—to help them thrive. Since opening its Chicago location in 2016, the organization has quickly become the largest provider of clothes and other essentials to school-age children in the city.

Despite the growing demand, Cradles to Crayons Chicago works to ensure the essentials it provides are the best possible quality.

“We know that quality equals dignity, so we don’t give everything that’s been donated to us,” says Executive Director Shoshana Buchholz-Miller. “We want to make sure that whatever we provide a kid is something they’re going to be excited about and feel proud of.”

To achieve distribution on such a scale, Cradles to Crayons Chicago relies on squads of volunteers from across the city. The organization also partners with more than 50 social service agencies, public schools and Boys & Girls Clubs that provide them with detailed requests for the kids that they serve: not just their ages and clothing size, but info about their likes and dislikes and habits. “We try to be mindful about what their needs are,” Buchholz-Miller explains.

“Quality equals dignity, so we don’t give everything that’s been donated to us. We want to make sure that whatever we provide a kid is something they’re going to be excited about and feel proud of.”

Donations get sorted, sized and then combined into “outfit packs”: a week’s worth of clothing for a child. The packs are then set for “shopping.” A volunteer gets a shopping list—an order from a social service agency for a specific child—and supplements the outfit packs with toys, books, diapers and wipes, school supplies and other items.

“Sometimes, we do find that we’re not able to fulfill every request that is made,” says Buchholz-Miller. “But the social workers can always order again the following week.”

The Trust has been a supporters of Cradles to Crayons Chicago from day one, with an initial 2015 Unity Fund grant of $25,000 to support the launch of the Chicago program. Since then, the Trust has committed $53,000 over three years to further the organization’s core mission.

“If the Trust makes a strategic investment in an organization, it’s a seal of approval in a way,” says former Associate Director of Development Dave Cotugno. “It says that we’re worthy of time and resources, and I think we’ve since seen that benefit from other funders.”

Currently, Cradles to Crayons Chicago is revamping its teen leadership program, in which teen volunteers commit to a three-month training program and then become volunteer leaders at the Giving Factory and in their communities. Future plans include developing a hub system of neighborhood sites, where people can drop off donated products and where Cradles to Crayons Chicago can host volunteer events. There’s currently a pilot site in Woodlawn and more to come in the northern and western suburbs.

On a rainy afternoon, volunteers from ITW David Speer Academy, Illinois Tool Works and the STEM club of its affiliated charter school are hard at work. As Top-40 pop bounces along quietly in the background, they sort clothes into outfit packs.

“This is harder than I thought it would be,” says a volunteer named Jakeline. “You actually want to find things that look good together.” She holds up a long-sleeved t-shirt with a quizzical eye. Her friend gives it a look and a nod, and it’s added to the pile. The outfit pack is well on its way.

By donating to Unity Fund, your support restores stability for people in crisis by helping them access services instrumental to their self-sufficiency. Join other generous donors and The Chicago Community Trust to make our region—our home—a better place to live for everyone. Make your gift today.