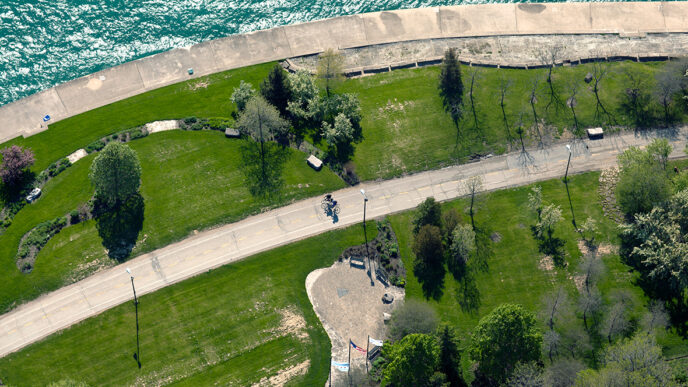 The use of public land greatly influences the livability of any region. From recreation to environmental health, concern for green space has grown in importance in recent decades throughout metropolitan Chicago—where our motto is “Urbs in Horto,” a “city in a garden.”

The Trust’s commitment to stewarding the natural world around us formally launched in 1970, with the funding of a study on pollution in Lake Michigan.

Around the same time, the Trust provided funding for the Chicago Horticultural Society to develop a master plan for a 300-acre tract of land at the northern edge of Cook County. The Chicago Botanic Garden opened to the public in 1972, providing a lush oasis for a growing metropolis.

Do the Botanic Garden’s waterfalls hold a secret in their depths—namely, the final resting place of the Trust’s late CEO James Brown IV? Read the truth about about the rumors: Planting the Seeds of Chicago’s Backyard Garden

Today, the future of the Trust’s role in promoting green spaces is reflected in its support for The 606—a project that transforms an abandoned rail line into an elevated park and trail system.

This highly anticipated urban oasis owes much to the Searle Funds at The Chicago Community Trust, which since 2007 has awarded $1.75 million for its development.

According to Scotty Searle, a family consultant to the Searle Funds at the Trust, “From the start, we thought that this project was a great idea. The 606 creates more green space in the city, encourages outdoor recreation, and connects some of Chicago’s best preserved parks in an exciting new way.”