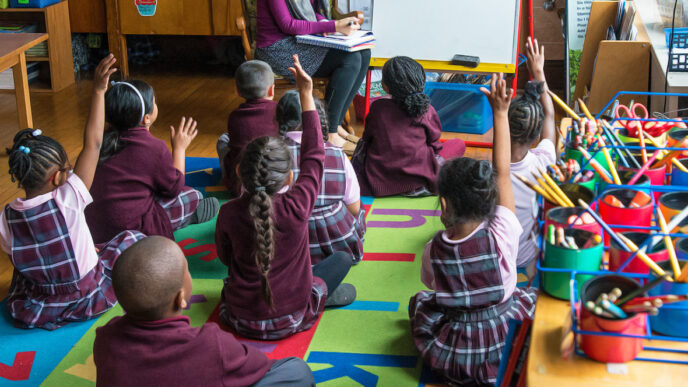 Jenny Fortner has a warm place in her heart for children with special needs. The newly appointed chair of Special Olympics Illinois, Fortner recently joined the Visionary Leaders Council of the “All Are Welcome” initiative in its campaign to help Catholic schools educate more children with disabilities alongside their sisters and brothers.

All Are Welcome is a partnership of Chicago nonprofits Aspire, the Big Shoulders Fund and the Andrew M. Greeley Center for Catholic School Education at Loyola University, all of which “bring something different to the table,” says Fortner, a managing director at Goldman Sachs who sits on the Big Shoulders Fund board.

The partnership aims to create an infrastructure inside individual Catholic schools to sustain inclusive education: preparing principals, teachers and families to be part of this new effort, and assessing the program as it goes along. The goal is to expand All Are Welcome to 30 Catholic schools over the next five years.

“We would like to help create a community that emphasizes what people can do, rather than what they can’t do,” says Fortner. “We want to make Catholic school a real option” for families with children with special needs.

Public schools are required to provide special education services. But although some individual Catholic schools have developed their own programs, often focused on learning disabilities, many parochial schools can’t afford them. Fundraising will be key to the success of All Are Welcome, Fortner says.

“All of us can learn to see the beauty in each other, and all of the things we can learn from each other,” Fortner says. “We don’t want funding to be the reason we have to say no.”

Through the All Are Welcome campaign, Jenny Fortner (second from left) is working “to make Catholic school a real option” for students with disabilities. A longtime supporter of Special Olympics Illinois, Fortner was recently named its chair.

As a girl, Fortner went to St. Michael School in southwest suburban Orland Park and Mother McAuley High School in the Mount Greenwood neighborhood of Chicago. She and her husband, a teacher and football and track coach at Marist High School, send their own children, ages 6, 8 and 11, to Catholic school as well.

The Fortners’ dream is that all kids can benefit from the Catholic school system. They believe that “mainstream” students stand to gain a great deal from All Are Welcome through a diversity of learning styles in the classroom.

“People fear the unknown. Kids who have been exposed to people with special needs are more open as they grow older to people who are different from them; exposure breaks down a lot of those walls and barriers,” she says.

Fortner has seen the benefits of bringing children of all abilities together through a Special Olympics initiative called Project Unify, which encourages a culture of inclusion—not just on the playing fields, but inside schools and in the broader community.

“People fear the unknown. Kids who have been exposed to people with special needs are more open as they grow older to people who are different from them; exposure breaks down a lot of those walls and barriers.”

Fortner saw the Special Olympics in action for the first time while she was in college at the University of Chicago. She played basketball and was president of the Women’s Athletic Association, where the Special Olympics Spring Games were then held. The WAA sponsored a team and helped out at the event. Fortner was “hooked” from the first, she recalls. Since then, “working with individuals with special needs has become a passion of mine,” she says.

Now, Fortner has identical twin nephews who have both competed in the Special Olympics. Watching one of the boys “fist-bumping with our son” after winning a medal in his first track event was “an awesome thing,” she recalls. “It was so meaningful on so many levels, and brought me full circle.”