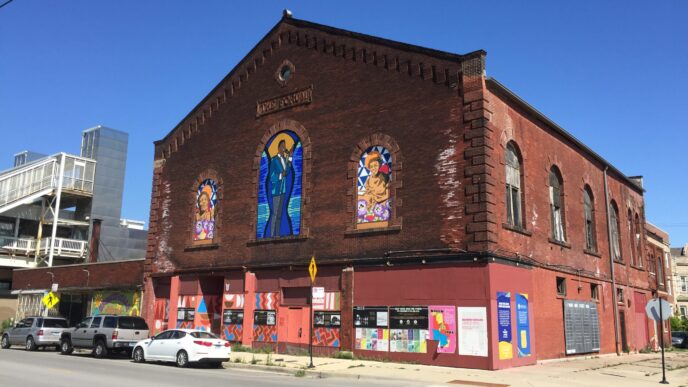 Urban Juncture Foundation is dedicated to working alongside its neighbors to spark revitalization and economic growth in Chicago’s historic Bronzeville neighborhood. In 2011 the organization mobilized community members to save The Forum, a vacant assembly hall and retail complex that were once central to life in Bronzeville, from demolition. Now, a $75,000 grant from the Trust’s Pre-Development Fund is allowing Urban Juncture to complete critical next steps in its decade-long effort to restore The Forum into a modern venue for culture, community, and commerce.

In the first half of the 20th century, the Great Migration and discriminatory housing practices led to a burgeoning Black population in Bronzeville. The area became known as Chicago’s “Black Metropolis,” the focal point of Black culture and business in the city. As Bronzeville flourished, so did The Forum. Built in 1897, The Forum is a 32,000-square-foot complex of three interconnected buildings located at 43rd Street and the CTA Green Line. For 75 years, its iconic Forum Hall performance venue, six generously-sized retail slots, and proximity to transit made it a hub for prominent performers, powerful politicians, parties and partygoers, peddlers, and patrons of all persuasions. Nat King Cole and Muddy Waters played The Forum. It was an organizing center for the labor movement and Civil Rights activists. It also provided a range of retail offerings, from fresh fruit and vegetables to some of the South Side’s best barbecue.

Sadly, between 1960 and 2010, Bronzeville lost 75 percent of its population and 90 percent of its commerce due to disinvestment, neglect, and the expansion of housing options in other parts of the city. The Forum closed its doors in the early 1970s, and today not a single business operates in the block surrounding it and the Green Line. The three-block stretch of 43rd Street around the train now has just three enterprises—a steep decline from the approximately140 businesses that operated there in 1960.

Urban Juncture Foundation (UJF) and the Bronzeville community believe The Forum can once again be an engine for economic growth and cultural vitality. Since saving the complex from the wrecking ball, UJF has secured its placement on the National Register of Historic Places, raised funds to complete initial repairs, and received an incubator grant to rehab the first of the six retail slots. The Pre-Development grant from the Trust will support the preliminary architectural plans needed to apply for historic tax credits—a key step in assembling the necessary capital to complete the $20 million redevelopment project. Once complete, The Forum will include a beautifully refurbished Forum Hall for cultural performances, events, and meetings; modern retail spaces where local businesses can thrive; and eventually, a rooftop garden and patio for recreation and gathering.

“The Forum is grounded in our community, which remains one of the most historic and culturally rich Black communities in the country,” said Bernard Loyd, president of UJF. “With the Trust’s support, we are working to celebrate that history and engage cultural leaders and entrepreneurs in crafting a vibrant Black Metropolis for the 21st century.