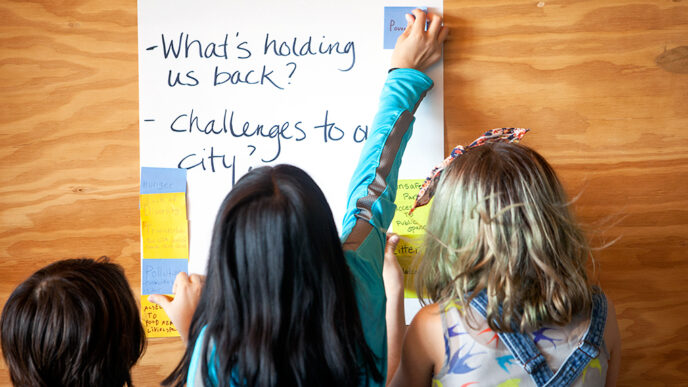 Philanthropic Kids Set the Agenda to “Make Our City Great”

How can we engage our children in service so compellingly that they’ll make it a lifelong habit?

The Honeycomb Project has been addressing that question for five years, curating fun and worthy ways for Chicago-area families to give back to their community.

Three days in advance of On the Table, the Honeycomb Project hosted their own On the Table luncheon—scheduled for a Saturday, so that kids could attend. The gathering in the boathouse at Clark Park featured a group art project, a fun buffet lunch at tables set with mason jars full of spring flowers, and a lively discussion around the theme “Let’s Make Our City Great.”

Cheryl Hughes, senior director of strategic initiatives for The Chicago Community Trust, explained to the group of about 20 guests that On the Table is a “day of civic reflection,” to consider how to make our community stronger. Hughes created On the Table for the Trust in 2014, drawing 11,500 people to break bread and share ideas; this year, 55,000 people attended On the Table conversations.

Cathy Tannen, co-founder of the Honeycomb Project, at the group’s third annual On the Table lunch. Community needs identified by the kids and parents who attended will shape the agenda for service projects in the year ahead.

John Unetich, 11, a student at Francis W. Parker School, attended with his mother Margaret. Unetich has volunteered with the Honeycomb Project “quite a few times” alongside his family: from gardening, to crocheting sleeping mats for homeless people out of recycled plastic bags.

“My favorite was giving out food for people to take home,” he said. “It was fun to see how happy people were to get the food.”

The Unetiches were two of 1,800 people who volunteered with Honeycomb just last year. Volunteers came from 88 ZIP codes across the region, including Indiana. These families took part in dozens of projects focused on helping people in need, cleaning and weeding natural areas, and improving recreation spots in underserved neighborhoods.

Honeycomb has hosted 6,000 volunteers since 2011. 82 percent have come from low- and moderate-income communities. Most have volunteered more than once.

“Families want to be part of the solution,” said Kristina Lowenstein, who co-founded the Honeycomb Project with Cathy Tannen.

For more about the Honeycomb Project, check out our feature on the group’s 63rd Street Beach cleanup: Moms Join Forces to Build “Honeycomb” of Volunteers

Lowenstein and Tannen met through their children, who attend Near North Montessori School. Before they had children, Tannen, worked as a lawyer with abused and neglected children in the public guardian’s office; Lowenstein worked with nonprofits. Both are lifelong volunteers, who bonded over their frustration with the dearth of quality service opportunities for families.

Some nonprofits have lengthy orientation periods, or age limits that mean one child in a family can attend while others cannot. Even when kids are allowed to participate, there may not really be anything for them to do, or equipment they can use comfortably. Volunteer events may last half a day or more, beyond a child’s capacity.

Not so with the Honeycomb project. Tannen says there’s no orientation, no “hassle”—and the average event lasts an hour and a half.

“We try to make our events really fun,” Tannen explained. “When we clean the beaches, we bring kid-sized gloves. When we do cooking, we have special choppers for the kids. We’re creating these events, editing them, curating them, making them work for all ages. We think this is what makes us really unique.”

Margaret Unetich and her son John, 11, have volunteered through the Honeycomb Project on projects from gardening to crocheting sleeping mats for people who are homeless. Since 2011, 6,000 people have participated in the group’s fun, kid-friendly service projects.

The Honeycomb Project held its On the Table event this year in the Jeanne Gang-designed WMS boathouse to connect to the environmental theme of one-third of the group’s events: building nature trails, cleaning up beaches or pulling out invasive weeds.

Around the lunch three tables, conversation crackled and ideas flowed. The Honeycomb Project plans to shape the community needs that guests prioritized during the event into its series of service projects for the year ahead.

“There will be something for everyone to do that’s meaningful,” Tannen said. “We have real work to get done, and that’s rewarding.”