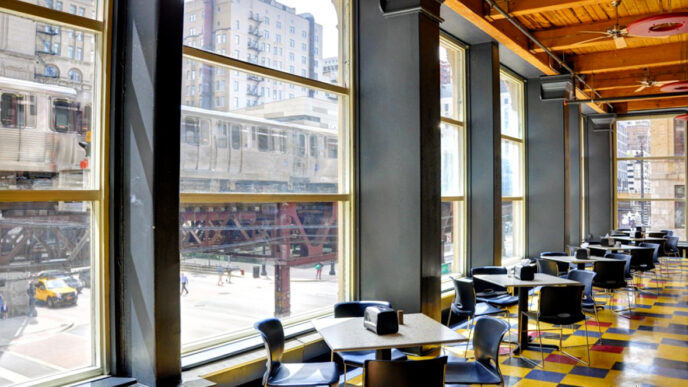 An elevated train rushes by the windows of the J. Ira and Nicki Harris Family Hostel in Chicago's Loop

At the age of eight, J. Ira Harris went to work.

It was 1946, and he brought home money for his family by selling newspapers door-to-door around their Bronx neighborhood.

[pullquote]“If you can get people together, they rarely get hung up on terms”: J.Ira Harris’ contributions to finance + Chicago[/pullquote]

That same work ethic would later propel Harris into a career in finance, where he helped to manage leading firms including William Blair & Company LLC, Salomon Brothers and Lazard Freres and Company, as well as his own investment banking business.

Harris became an internationally recognized expert in the field of mergers and acquisitions, a driven leader known for personally negotiating multimillion-dollar financial deals.

But Harris never approached mergers as a strictly financial proposition. He described investment banking as “a people business. If you can get the people together, they rarely get hung up on the terms.”

That same connection to the humanity behind the money made Harris a natural philanthropist—and an outstanding leader on The Chicago Community Trust’s Executive Committee, which he joined in 1975. His arrival heralded a new age of international money management expertise on the Trust board.

“I really learned more about what was going on in the real Chicago through exposure to all the different organizations in the key social areas,” Harris says of his time at the Trust. “It was just a terrific experience.”

J. Ira Harris, around the time of his tenure on the Trust’s Executive Committee.

The Trust’s work to transform the quality of life in the region inspired Harris and his wife to establish the J. Ira and Nicki Harris Foundation Internship in Philanthropy in 1986.

Each summer, two college students pursuing advanced degrees in nonprofit management, public policy, social service administration or a related discipline work at the Trust for 10 weeks. Their duties include evaluating grant proposals and assisting with research on prospective donors.

This immersive experience in a community foundation provides the students with a deeper understanding of philanthropy and its importance to the city and surrounding areas.

“It’s very important to expose young people to the work that the Trust is doing and for them to learn and be able to go back into the communities and share what they’ve learned,” Harris explains.

J. Ira and Nicki Harris at their Florida home. Photo by John Cancelino

These days, the Harrises call Palm Beach home. And they’re perhaps best known for their $10 million gift to the University of Michigan, which rechristened the Michigan head football coaching position as the J. Ira and Nicki Harris Family Head Football Coach.

But they still remain connected to Chicago through their three charitable funds managed by the Trust.

Through these philanthropic vehicles, they support a variety of local community projects and institutions, from the Big Shoulders Fund, which supports Catholic schools, to the Museum of Science and Industry and Millennium Park.