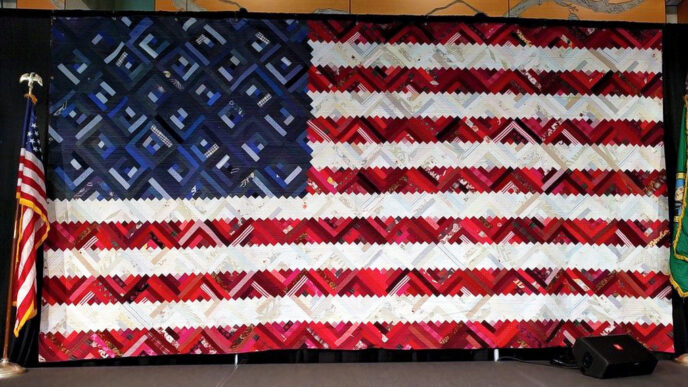 This quilt by artist Luke Haynes provided the backdrop for conversation at Citizen University.

On the Table’ Goes to Citizen University

This year’s annual conference for Citizen University was an exciting national moment for On the Table.

Hosting a dinner conversation with activists, artists and changemakers from around the country gave us the opportunity to present On the Table as a tool for considering core questions concerning where our communities are heading, and where we want to go.

Among the 500+ participants and presenters at this year’s conference in Seattle were notable voices on citizenship and community: Brad Jenkins from Funny or Die, author and presidential advisor Reverend Jim Wallis, executive producer of “Fresh off the Boat” Melvin Mar, Maria Hinojosa of NPR’s “Latino USA,” documentary filmmaker Jose Antonio Vargas and many others.

Bringing these people together to tackle the idea of remaking the political narrative in the U.S. around citizenship, not partisanship, provided a unique forum to share On the Table with a wide audience, and present it as a portable concept.

From our table discussions exploring how we can unite around ideologies, rather than being divided by regional politics of place, the central question that emerged was: Who do we really mean when we say “us?”

So often we are isolated in our communities, to the detriment of our social capital as individuals. The charged political rhetoric in our society can make us hesitant to share our voices with those who might not agree with us.

Groups like Living Room Conversations in Portland, 1000 Dinners TO in Toronto and Dallas Dinner Table show that there are many of us who are doing work with conversational models to overcome that separation. Though there are people using many other vehicles to fulfill our responsibility as citizens to act together, this conversational model has the ability to tap into the common desire to succeed as communities and as a nation.

In the politically diverse table groups at Citizen University, we found that once we were able to reveal our differences, we could reach common ground. Once the ice was broken, and we began to talk, bridges formed between different sides of issues. We began to see that while we may have different ideas for reaching a solution, we often want to get to the same place.

Once we were able to reveal our differences, we could reach common ground. Once the ice was broken, and we began to talk, bridges formed between different sides of issues.

Bringing together people with fundamental political, social and economical differences to find a path to the future together is what “us” has to mean, if we are going to solve the many issues that face our communities.

Citizen University gave me the opportunity to see how conversations are happening around the country. Other groups have developed similar ideas to On the Table that bring together people with fundamental differences, and facilitate a process to find a future together. In our sometimes dysfunctional political climate, many people are using a variety of vehicles to say that it is our duty as citizens and residents to act together.

The basic idea of coming together over meals to have conversations about our shared commitment and responsibility to find solutions, versus the often accusatory and combative tone of discourse, gives me great faith in the role of On the Table’s approach to civic engagement. I’m excited about the Trust’s part in advancing this movement locally and nationally.