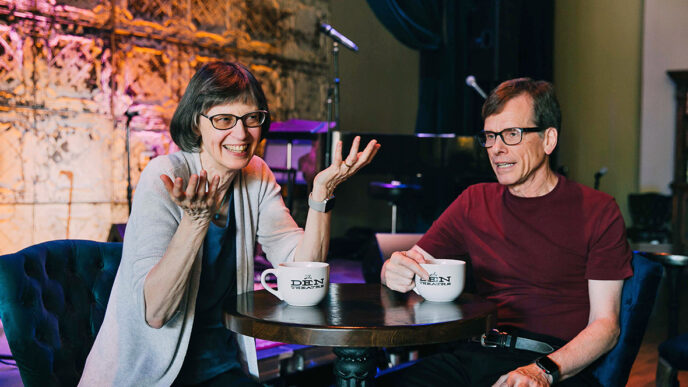 Michael and Mona Heath prefer to sit in the front row. “We like our theater really up close and personal,” says Michael.

“Our best theater experiences are when our toes are touching the set,” says Mona.

The Heaths are enthusiastic supporters of the Chicago theater scene, with an emphasis on storefront theater companies, diversity and accessibility. But they don’t just send money—they show up.

At the most recent Jeff Awards ceremony, plays sponsored by the Heaths received 26 nominations and won five prizes. The winner for best new play was Loy A. Webb’s The Light, a production by The New Colony ensemble that the Heaths made possible, coming to the rescue when other funding fell through.

A vital tool for the Heaths’ philanthropy is The Chicago Community Trust, where they have established a donor advised fund. The Heaths learned about the Trust when they found it online, and were impressed by its century-long track record. “They seriously care about the communities of Chicago,” Mona says.

Because the Heaths make numerous donations to small theater companies, they see the donor advised fund as a way to organize their contributions. “We want to focus on the giving rather than the management of the money,” says Mona.

The Heaths created a website for their fund, to explain its grant making priorities. The site also includes reminiscences of the Heaths’ “life-changing theater experiences,” and samples from their collection of nearly 3,500 playbills.

When donors plan to leave their estate to their fund, as the Heaths do, The Chicago Community Trust gives them confidence that their charitable intent will be honored after they’re gone, creating a lasting legacy.

On the drive home, they discuss the quality of the plays. They say they agree 99% of the time—but that doesn’t mean they like everything. “If you never see a stinker, you’re not taking enough chances.”

The Trust serves another key role: identifying unmet needs that donors might consider.

“One of the goals of the Trust is to try to connect donors with projects that are of interest,” says Nicole Layton, the Trust’s assistant director of donor services, who works closely with the Heaths. “Now we call it ‘collaborative philanthropy’—but we’ve always done it.”

The Trust steered the Heaths to one of their favorite charitable projects: an initiative with Steppenwolf Theatre and the Chicago Cultural Accessibility Consortium that lends accessibility equipment at no charge to theaters and other cultural organizations, making their productions accessible to audience members with visual or hearing disabilities.

In each of its first two years, this program helped make approximately 100 cultural events accessible to persons with disabilities. “That’s one of the most rewarding projects we’ve had,” Michael says.

In 2017, Michael and Mona Heath received the League of Chicago Theatres’ Tribute Award, whose past winners have included Nathan Lane and Brian Dennehy. “A magical night,” recalls Michael.

But their route to becoming award-wining theater patrons is improbable.

“We grew up in the rural Southeast with no access to theater,” says Michael. He is from western Kentucky; she spent her childhood on the Virginia coast. They met in Tennessee, moved to California and relocated to Champaign, where Michael, 71, is a computer science professor emeritus at the University of Illinois. Mona, 66, is retired from her job as the university’s deputy chief information officer.

Though neither of them has ever acted in a play, the theater has been a shared passion throughout their 42 years of marriage. They make frequent trips north from Champaign to witness the wonders on Chicago’s stages. On the drive home, they discuss the quality of the plays. They say they agree 99% of the time—but that doesn’t mean they like everything.

“If you never see a stinker, you’re not taking enough chances,” says Michael.

They are struck by the openness of Chicago’s theater scene, and how readily their help has been welcomed. “In Chicago, it’s about ensemble, visceral acting and collaboration,” Mona says. “One corollary of that is they’re very accepting of outsiders.”

Evan Hatfield, the director of audience experience at Steppenwolf who worked with the Heaths on the accessibility project, attests to their impact.

“They have relationships with so many companies around town,” says Hatfield. “Everybody knows the Heaths. I’m really, really grateful for them being on the scene.”

One of the most visible artifacts of the Heaths’ involvement in Chicago theater is the Heath Main Stage, part of the Den Theatre complex in Wicker Park.

A few years ago, one of Michael’s former colleagues at Oak Ridge National Laboratory in Tennessee emailed him about a recent trip to Chicago: “We went to this theater called the Den Theatre, and there was a theater named for Michael and Mona Heath. Can you believe there’s another couple with that name?”

Michael and Mona laugh just thinking about it. “It didn’t occur to him that that would be us,” Mona says.