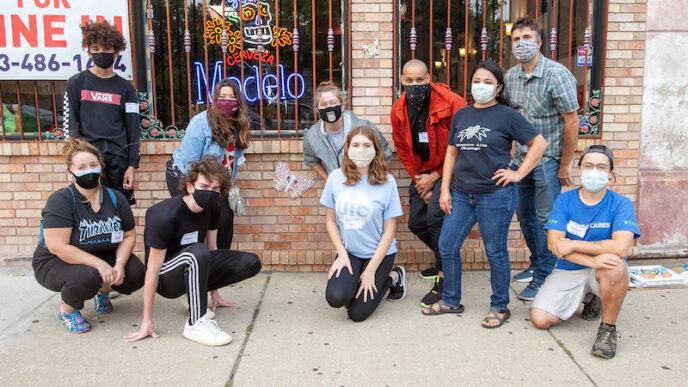 Drive along the “Armitage Avenue Welcoming Corridor” between Pulaski Street and Kostner Avenue in Hermosa, a vibrant Latinx community on the city’s Northwest side, and you may catch a glimpse of some of the mosaic monarch butterflies displayed on a number of storefronts.

The butterflies—and the corridor itself—are part of a project sponsored by the Logan Square Neighborhood Association (LSNA) to foster connectivity, a sense of security for Hermosa residents. Two year-long grants ($10,000 each) from Nuestro Futuro, an initiative of The Chicago Community Trust, were significant in making the corridor project a reality.

“Nuestro Futuro has been instrumental in supporting our efforts around the welcoming corridor,” said Marcelo Ferrer, director of immigration services.

The organization’s work also includes supporting businesses, celebrating culture and reinforcing a sense of stability. In the future, LSNA plans to build a welcoming plaza in an empty lot on the corridor for a gathering place. The grants from Nuestro Futuro have allowed LSNA to keep the corridor’s development percolating, no matter what else was going on, according to Ferrer.

Last year, LSNA sponsored Tamal, a hugely successful one-day festival in a stretch of the corridor; vendors sold tamale-style wraps from a number of Latinx cultures. The second annual Tamal was scheduled for this fall, until COVID-19 prevented it from moving forward. Organizers made a quick pivot to something very different: a smaller, solidarity-focused event called Carnival Cariño.

For Carnival Cariño, local artists have created gorgeous menu boards for participating restaurants and art kits celebrating Latinx culture families can make together at home. In addition, three restaurants in the Armitage corridor will provide meals free of charge to about 80 neighborhood families in need.

Alejandra Hernandez, co-owner of El Azteca (4158 West Armitage Avenue), one of the restaurants that will provide meals as part of Carnival Cariño, said the program “helps the family in need by providing a free meal for the day, and it helps us, too. It brings that family into our business.”

El Azteca has stayed open through the pandemic, although the restaurant lost business and had to let some employees go. Hernandez, whose family has been in the neighborhood for 20 years, says they help out as much as they can by providing some of their former servers with food.

According to Ferrer, many families in Hermosa are hurting. Already under pressure from U.S. Immigration and Custom Enforcement (ICE), which has arrested undocumented people in the neighborhood, and from the gentrification that has pushed many Latinx residents out of nearby Logan Square, Hermosa has been hit hard by the pandemic. By late September, its 60639 zip code, which includes an area to the west, was reporting twice the incidence of the virus as Logan Square, and four times as many cases as Lincoln Park. LSNA has assisted more than 400 families this year with direct cash assistance, more than $250,000 in all, Ferrer says.

Outside of its work on the corridor, LSNA has been pursuing social justice initiatives in housing, education and immigration since 1962. Norma Rios-Sierra, LSNA’s board president, says that the past four years have been especially difficult, as the Trump administration has targeted immigrants and undocumented people for arrest and deportation.

“People have been afraid to live their daily lives,” said Rios-Sierra.

LSNA offers legal help and workshops around immigration and citizenship, fields a number of programs to keeping affordable housing available in the neighborhood, and has been involved in area schools for years. In 2017, LSNA declared 10 neighborhood schools sanctuaries for undocumented residents. Its 25-year-old Parent Mentor Program, which trains parents to assist in their children’s schools and helps them polish their leadership skills, has been widely copied.

During these challenging times, LSNA recognizes the value in providing some relief and entertainment to Hermosa. Carnival Cariño is an invitation to the community’s artists, restaurateurs, business community, residents and the city at large to appreciate the connections that make them strong. According to Rios-Sierra, the grant from Nuestro Futuro to support the corridor project reaches beyond basic survival – it lift the spirits of a plucky neighborhood.

“It really motivated us to move forward and expand on it,” she said.