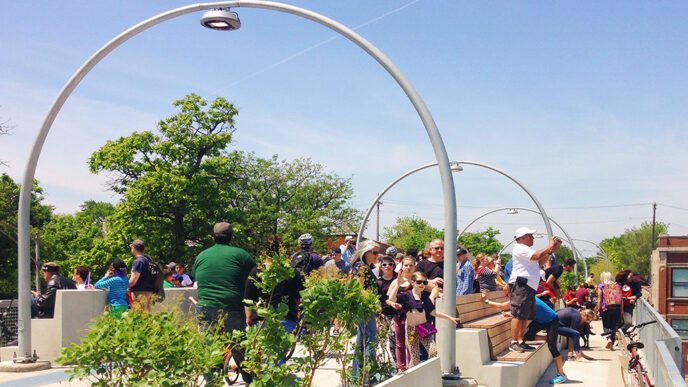 Northwest Neighborhoods Riding High on The 606

With handmade flags waving and West African drumbeats setting the pace, cyclists and pedestrians brought The 606 recreational trail to life on June 6—a community celebration over fifteen years in the making.

These 2.7 miles of elevated parkland were once a railway, servicing the manufacturing district that spanned Chicago’s Northwest side. Disused since the 1990s, the tracks blossomed into an unplanned urban nature trail. Soon, city plans for boosting recreational opportunities and green space began to look for ways to tap this one-of-a-kind resource.

And Saturday’s ribbon-cutting at The 606—which draws its name from the local ZIP code prefix—launches an urban oasis that unites four diverse neighborhoods with healthy activity and safe places to play.

“The 606 is Chicago’s next great park,” says Beth White, Chicago area office director of The Trust for Public Land, a national conservation organization that has managed the project. “It has the power to transform the city in a meaningful way.”

Mayor Rahm Emanuel (center) and other government officials broke ground on The 606 in August 2013. Photo courtesy of The Trust for Public Land.

Although the park broke ground in August 2013, the Trust’s support extends back to its roots. The Searle Funds at The Chicago Community Trust provided the first of its grants to the project in 2007. Since then, support has totaled about $1.75 million towards the effort.

“From the start, we thought that this project was a great idea,” says Scotty Searle, one of the family consultants to the Searle Funds. The project is just one element of their strategic commitment to land conservation efforts, with a special eye for innovative, environmentally conscious projects that set Chicago apart on the global stage.

Searle adds, “The 606 creates more green space in the city, encourages outdoor recreation and connects some of Chicago’s best preserved parks in an exciting new way.”

At the opening celebrations, pedestrians and cyclists enjoyed the first chance to explore the length of this 16-foot-high rail bed, which now connects five existing ground-level parks as well as other neighborhood landmarks and transit hubs.

This new access to recreation was a key impetus behind the park’s development. Previously, historic residential community Logan Square had the least amount of open space per capita of any Chicago neighborhood.

“The new trail will be a tectonic shift for the Northwest Side,” says Ben Helphand, founder and president of Friends of the Bloomingdale Trail, a community group that advocated and built grassroots support for the project.

An artist’s rendering looks ahead to neighbors visiting Julia de Burgos Park via The 606. Rendering courtesy of The Trust for Public Land.

In addition to support from the Searle Funds at The Chicago Community Trust, The 606 received federal funding as well as a campaign of corporate and individual donations. The City of Chicago provided the land—purchased for $1 from the Canadian Pacific Railway—and dedicated resources from the Mayoral Office and the Park District.

The opening celebration honored not only their initiative, but the countless hours of effort dedicated by community organizations throughout the planning and the implementation.