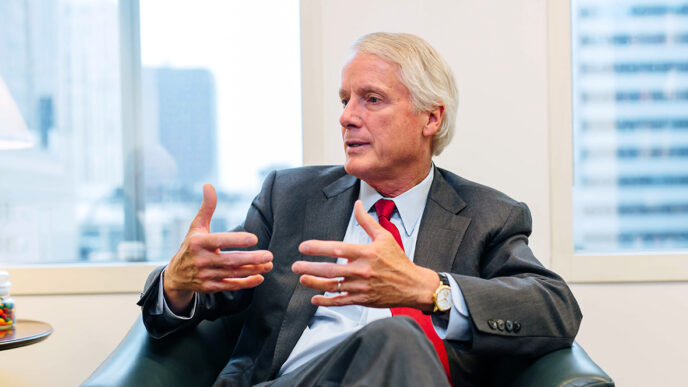 And he would know. During his term as chief executive officer, Waddell honed and personalized that proficiency—and proved an invaluable friend to The Chicago Community Trust.

“Throughout his tenure as CEO, he continued to make the bank’s relationship with the Trust a key priority,” says Jason Baxendale, the Trust’s chief development officer. “He has committed so much to Chicago.”

[pullquote]“You roll up your shirtsleeves, you get in, get your hands dirty, work hard and get things done.” @NorthernTrust chairman of the board Rick Waddell reflects on leadership + philanthropy, #Chicago style[/pullquote]

Waddell’s commitment to service began at his suburban middle school, when he volunteered to tutor kids from nearby Pittsburgh. He realized for the first time how fortunate he was.

“It struck me that there’s a whole world out there I didn’t know anything about, that needed help,” he recalls. “That was an early seed.”

In 1975, after graduating from Dartmouth College, Waddell was “fortunate enough” to get a job at Northern Trust. He and his wife, Cate, may have wound up in Chicago by chance, but they came to love and embrace the city where he would spend his career.

Waddell says that he never expected to rise as high at the Northern Trust as he has. But with his success has come an opportunity he relishes: to give back, making a difference in the fabric of life here. He and Cate have given generously to numerous organizations over the years, like the Kellogg School of Management at Northwestern University, where Waddell earned his MBA; the Kohl Children’s Museum, where he is board chair emeritus; and the United Way.

“It struck me that there’s a whole world out there I didn’t know anything about, that needed help.”

At Northern Trust, Waddell says, “the environment is very caring.” He traces that spirit to the bank’s origin, founded to steward not only the wealth of Chicago’s affluent families “but also their legacy, their history and their well-being. I ended up with a great company that has a terrific strategy, and a culture that values giving back and taking care of people.”

That charitable commitment is reflected in Northern Trust’s role as a trustee of The Chicago Community Trust: one of five banks that manage the Trust’s endowment, and help advise on strategic direction.

In 1989, to celebrate its 100th anniversary, Northern Trust created The Northern Trust Centennial Fund, dedicated to supporting programs that improve student learning and achievement. The bank selected The Chicago Community Trust to house the Centennial Fund and administer its grant making.

It was while Waddell sat on that Centennial Fund grant committee that he really got to know The Chicago Community Trust. “That was when it all clicked for me,” he says.

Waddell came to appreciate The Chicago Community Trust’s “focus on impact, and on being a convener of philanthropy. The Trust brings people together to address the city’s most critical needs, and its focus has never been sharper.”

The Chicago Community Trust also hosts Northern Trust’s donor advised fund program, through which the bank’s clients can create charitable accounts to support philanthropy across the nation. Thanks to Waddell’s advancement of the partnership, the program now includes more than 400 funds, with over $375 million in charitable assets—advised by donors, stewarded and facilitated by The Chicago Community Trust.

The program is a great solution for philanthropic families, Waddell says, because The Chicago Community Trust is attentive to accounting and reporting concerns, is strong on service and maintains a solid reputation for integrity.

The Trust, in turn, has a profound appreciation for this longstanding partnership. “The Northern Trust has been an indispensable partner in our mission to improve the quality of life in Chicago,” says Baxendale.

“It’s this iconic presence in the city, and in the community—and the same could be said of The Chicago Community Trust. There’s a shared commitment to seeing the city thrive.”

“The Northern Trust has been an indispensable partner in our mission to improve the quality of life in Chicago. It’s this iconic presence in the city, and in the community—and the same could be said of The Chicago Community Trust. There’s a shared commitment to seeing the city thrive.”

As a member of the board of the Federal Reserve Bank of Chicago, Waddell worked on the Financial Services Pipeline Initiative, a collaboration among local financial institutions and philanthropies, including The Chicago Community Trust.

“One of the issues in the financial services sector has been that we don’t have enough people of color,” Waddell says. Not enough young professionals of color enter the sector, he explains; of those who do, many leave the industry rather than rising into senior leadership roles. The FSPI creates “a career path and a network” to help them stay.

Waddell said he appreciates efforts like these, in which The Chicago Community Trust, businesses and nonprofits work together to make the city better for everyone.

“It’s those positive Midwestern values.” he said. “You roll up your shirtsleeves, you get in, get your hands dirty, work hard and get things done.”