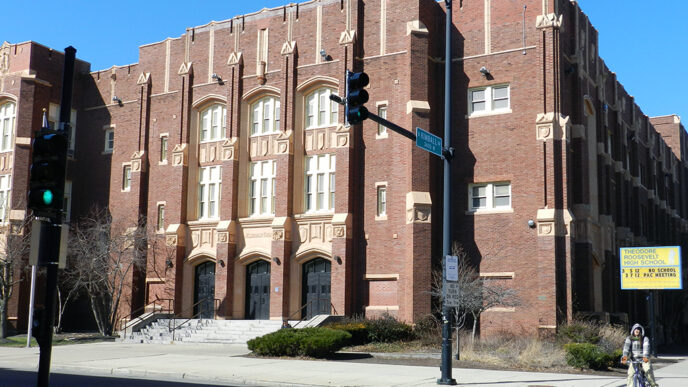 I was definitely not planning on attending Roosevelt when I was an eighth grader at Palmer Elementary.

As a kid on the north side of Chicago, I really didn’t know what high schools were available, nor did I know what it would be like to go to a school that is far away from home. Consequently, I was set on going to Lincoln Park, the school my older cousin was attending at the time. The only other schools I wanted were Von Steuben, since my best friend was going there, or Lane Tech, which I believed to be very prestigious.

In my mind, the worst case scenario was to go to my neighborhood school, Taft.

When it was time to apply for high schools, I had to choose five, and my last two choices were a total mystery to me. Schools like Whitney Young and Northside Prep seemed laughably out of reach, and I had absolutely no idea what other high schools were available, so I called my cousin and asked him for suggestions. He told me two names that he believed were good, and I applied to them: North Grand and Prosser.

As it turned out, I only received acceptance letters from North Grand and Prosser, but those schools were too far for me. I received nothing from Lincoln Park, Von Steuben or Lane. To this day I have no idea if I was accepted. Defeated, I decided to enroll at Taft.

On my way there with my mom, we got lost; we called a cab, and it just so happened that the driver’s son went to Roosevelt. He convinced us that Roosevelt wasn’t as bad as its reputation made it seem and we decided to enroll since it was closer to us than Taft.

In eighth grade, the thought of going to Roosevelt was a nightmare. At school, we would joke about Roosevelt’s violent reputation, under the impression that it was unsafe and for low-achieving kids. To think that this “bad” school was suddenly an actual possibility for me was unbelievable. My first instinct was to transfer to another school as soon as possible, namely Von Steuben.

However, as time went on, I learned that the cab driver was right all along.

Roosevelt was an enigma. Royal blue lockers and tiled floors created the impression of a warm retro TV high school that was juxtaposed by cold metal detectors and security guards. It was simultaneously predictable and unpredictable: fights were common and many kids didn’t care about school, yet teachers went above and beyond their roles and students excelled in their classes.

Perhaps the most unpredictable thing for me, in those days, was how rewarding my experience actually was.

Students at Roosevelt didn’t partition into cliques like they did in middle school, which allowed me to make friends with people of all kinds of interests and backgrounds. We had a lot in common, with most students being poor students of color. Mexican, African American and Filipino were some of the most represented ethnicities on campus, and we had almost any ethnicity with a diaspora due to Albany Park’s historic popularity with immigrant groups.

On my way there with my mom, we got lost; we called a cab, and it just so happened that the driver’s son went to Roosevelt. He convinced us that Roosevelt wasn’t as bad as its reputation made it seem and we decided to enroll.

We were also diverse in interests, with some of my fellow graduates achieving contracts with colleges for basketball and football, going to Hollywood to pursue a musical career, studying to become aerospace engineers, doctors and teachers, and taking over family businesses.

Our students were not the only ones who were diverse; our teachers were coaches, chefs, biochemists, college professors, dancers, investors, beekeepers. They organized performances and community service projects, started sports teams from the ground up and shared their time with us before school, after school and even during their lunch; I know a few who would actually share their lunches with students. It was with these people that I learned and bonded, forming memories that constantly make me reminisce about high school.

The people of Roosevelt proved my eighth grade self wrong; an enriching and valuable education can happen anywhere that teachers and students invest time in learning. They kept me coming back to school in spite of the struggles we shared.

In my time there, Roosevelt underwent a plethora of faculty, staff and administrative changes due to budget cuts enacted by Chicago Public Schools. Millions were lost, resulting in less classes and extracurricular activities that were organized by teachers.

The quality and quantity of our lunches dwindled as lunch lines lengthened from the lack of cafeteria attendants. The experience was worsened by the peak in conflicts between the Chicago Teachers Union and Chicago Public Schools, which resulted in longer school days and years and interruptions to our regular curriculum caused by strikes.

As our poor school got poorer, pressure to succeed academically multiplied, forcing teachers to dedicate a substantial amount of class time to preparation for standardized testing. Additionally, the lack of resources made it harder to learn and do well in the first place. All of these challenges gave the impression that we as students aren’t worth investing in, so we had to prove our worth. Our experience as poor students of color at Roosevelt was marked by systematic negligence that we knew all too well.

I didn’t know much in 8th grade, but I already knew that not all Chicago public schools are created equally, and my experience at Roosevelt reinforced that belief.

My neighborhood school exposed me to systematic injustices that exist in this city while people who live, love and learn educated me and developed my strong interest in social justice. At UChicago, I study History in order to understand how injustice and inequity became parts of our global society, as well as to look for solutions to the problems we face today by analyzing triumphs and mistakes of past generations.

My experience and education have made me proud to be an alum of Chicago Public Schools and Roosevelt High School.