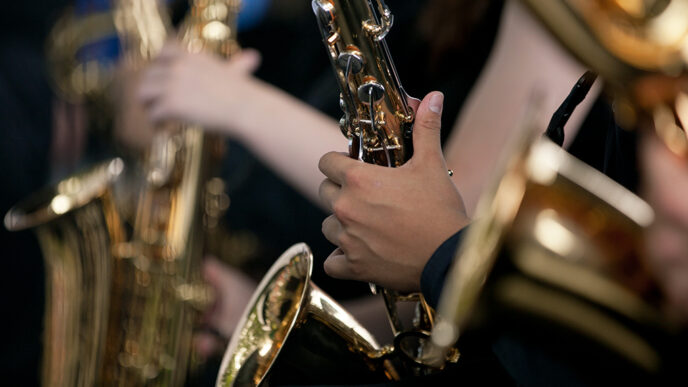 Once I started sixth grade, I immediately joined the band and loved it. Most of my friends were in band, and I spent many hours a week practicing my clarinet.

I already had a musical background since my family is musical and I started playing piano when I was six. For my future education, I envisioned probably what most of my band peers envisioned: I would go to Stone Mountain High School and be in the marching band then go to the University of Georgia and major in music. It made sense.

Then one night, when I was in 6th grade, my mom took me and my friends to see a musical at Dekalb School of the Arts. I’d never seen a live musical before. It was The Pajama Game.

I don’t actually remember what the show was about—even after seeing it I probably couldn’t tell you—but what I do remember is the experience. The singing, the dancing, the orchestra and the sets were all so captivating.

That’s when I knew I had to be a part of something like that. I auditioned for the school the very next year and entered Dekalb School of the Arts (DSA) in eighth grade.

I auditioned as a piano major and creative writing minor. The school requires that each student earns credits from performing or working on crews for shows, so I also gained a lot of exposure to other art areas like dance and visual art.

I learned important skills behind the scenes of live performances working on stage, lighting, and costume crews as well. I even ended up double-minoring in technical theater building sets and recording lighting cues.

DSA isn’t like most of the other school in that area, and not just because of the arts aspect. One of the most noticeable differences is the diversity of the students. That’s something that you won’t see in very many Dekalb County public schools. A good number of schools are made up almost exclusively of one race or ethnicity.

All students deserve the chance to be brought up in a learning environment that genuinely fosters their creativity and promotes their success, not one that merely tolerates them until graduation. This type of school should be able to exist and thrive in any community.

And it certainly isn’t just a Dekalb issue. Diversity is an issue in most neighborhood schools across the US because most neighborhoods aren’t diverse. The students were also very open-minded and had varying social and political views. I definitely benefited from learning in an environment amongst these students because I was introduced to so many different perspectives that have shaped the way I think about issues.

Looking at the school, you wouldn’t think much of it—one hallway with 320 students. However, the school is pretty highly ranked as number 3 in the state. It didn’t get to that position with much money either. We didn’t have the resources of well-funded schools, and we were losing staff every year due to budget cuts.

But we were motivated. Teachers who loved teaching brought up students who loved learning. Plus, we gained valuable knowledge in areas that we were passionate about. Everyone felt intelligent, talented and valued, and we performed as such both academically and artistically.

I believe it was our attitudes toward education that took us so far. And I’ve always believed that the only difference between students in neighborhood schools and those in magnet or private schools is access to opportunity.

Schools like DSA motivate students by offering the opportunity to work with staff who want to be there and the opportunity to expand on student’s passions. That is why they are successful, and that is why I was so inspired by Generation All’s initiatives to fund and enhance neighborhood schools.

All students deserve the chance to be brought up in a learning environment that genuinely fosters their creativity and promotes their success, not one that merely tolerates them until graduation. This type of school should be able to exist and thrive in any community.

Organizations like Generation All understand this and constantly work toward bringing schools like that to the Chicago neighborhoods that need them.