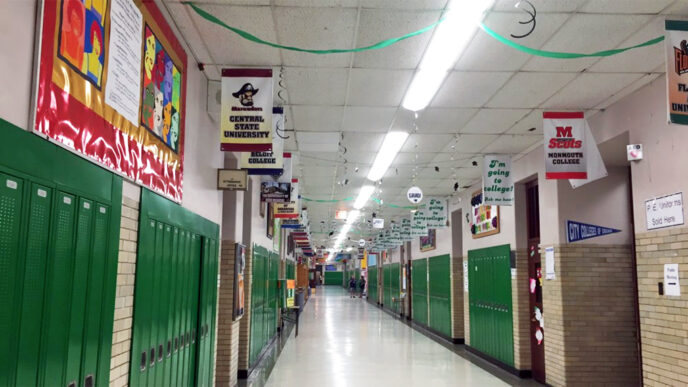 My eighth grade year was all about preparing to go to high school.

My mind was set to go to Whitney M. Young Magnet High School. However, my parents weren’t so keen on letting me go to a high school where I would have to take public transportation. It was not safe and I was too young, they would say. Instead of the 45-minute train ride it would take to get to Whitney Young, my parents preferred for me to go to my neighborhood school, Thomas Kelly High School, because it was a five-minute walk away.

It had a bad reputation and I wanted to go somewhere better. I had heard many stories of students fighting, students getting their personal belongings stolen and students always cutting class. Students even had to use transparent book bags and go through metal detectors every morning.

I hated the thought of going to Kelly, not just because of the reputation it had, but because I knew that the majority of the students from my elementary school, James Shields Elementary School, would be there as well. I wanted to get away from them and start fresh.

To actually get into the school of my dreams, I had to apply and take the Selective Enrollment test. In the application I had to rank my choices and my top one was Whitney, followed by Jones and Lane Tech. I took the test early January at King College Prep High School.

After an excruciatingly long wait, my results came in the mail one Sunday morning in late March. At first I was not hopeful that I had gotten any offers because many people I knew had already received their results and they weren’t accepted to the high school of their choice. However, I opened the letter and saw that I was offered a spot at Whitney Young! I was ecstatic.

This amazing feeling did not last long, however. The second I told my mother, she told me she was not going to let me go.

For weeks on end I begged and begged my parents to let me go, but to no avail. It was dangerous to go far and I would have to wake up too early to get there. In the end I chose Kelly—but I could not be more grateful for going there.

I have made amazing new friends and established even closer friendships with the people I went to elementary school with. There are many wonderful opportunities at Kelly that I never knew I could find. Their IB and honors program is preparing me for life after high school.

The second I told my mother, she told me she was not going to let me go.

For example, in my AP European History class, the teacher treated us and taught us like we were college students. He would give us lectures and it would be up to us to take notes and keep up. We were also responsible for keeping track of the deadlines for our assignments and turning them in. In fact, there are many students that have taken his class and graduate but come back to tell him that his class really prepared them for college. Their courses were just like his class.

This fall, as a senior, I am going to take some more AP classes, an IB class, as well as other honors classes. I will also continue take advantage of the many other opportunities that Kelly offers like the Key Club and the Spanish Club. Since I really love helping out the community, Key Club is a great opportunity to help serve the community and the school. Last fall we volunteered to help give out refreshments at the Hot Chocolate 15k/5k run.

The Spanish Club also focuses on helping the community and learning more about our Hispanic culture. In April, for Children’s Day, we decided to create a story explaining the history of the piñata.

Kelly opened my eyes and made me realize that I can do anything I want to do. I know I want to attend college and learn more even though I may not know what I want to study. If I had done my research back in eighth grade I would have realized all these things that Kelly could offer. I wanted to go to Whitney Young because it had a great reputation but that was pretty much it. I did not know much about the school and I did not bother to do much research.

The search for a college will be different, however. I will research more about the courses offered and the extra-curricular activities that fit my wants and needs than the reputation.

I have learned that education in Chicago is not equal. Everyone deserves a high-quality education and it is not fair that the focus of the push for that quality education only happens in select schools. Neighborhood public high schools deserve the same resources and support that selective schools and charter schools receive.

I did not know much about the school and I did not bother to do much research. The search for a college will be different, however.

Many of my elementary school classmates go to charter schools or selective schools. I know many of them along with many people in the community look down upon neighborhood schools. Neighborhood public high schools offer many opportunities and the only difference between these schools and others are the amounts of resources and support that they lack.

I know now that there should be a widespread effort in improving them because everyone deserves a chance to learn. Instead, education should be about creating a society where everyone can understand and learn from each other.

More about Kelly High: A documentary filmmaker follows the girls soccer team over the course of years, capturing hope and heartbreak on and off the field. Read more