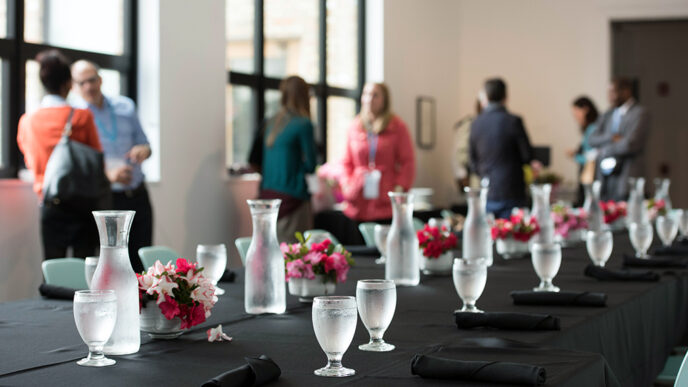 Much More Than Conversation: Three Years of On the Table

The first time one tries something, it is about figuring out how to get it done. The second try is often about making adjustments to improve or enhance your experience. A third try gives you a chance to reflect on whether you are making progress, or “getting it right.”

Since the 2014 inaugural version of The Chicago Community Trust’s now annual On the Table, my colleagues and I at the University of Illinois at Chicago’s Institute for Policy and Civic Engagement (IPCE) have conducted a follow-up survey of participants each year to learn about who’s participating and why, and what those people care most about. With three years of data under our belt, we now have the opportunity to look at the impact of the initiative in a meaningful way.

Each year of On the Table has seen a significant growth in participation—from just over 10,000 people in 2014 to an estimated 55,000 in 2016. While such an influx in new participants makes specific comparisons of repeat participants difficult, when we look at the trends in the overall data we can see that On the Table is about so much more than just a passing conversation at a single moment in time.

Here are some snapshot observations from across the three years:

On the Table conversations are connecting people both in the “thin” connections that are the start of a new social bond, and with “thick” connections—bonds necessary for collaboration and social action. These conversations are strengthening the bonds that can help to reconnect the social fabric of our communities.

• On the Table touches on the most pressing issues of the region.
Respondents discuss a wide variety of issues in their On the Table conversations. But, each year, we’ve seen some specific issues rise to the top. In 2015 and 2016 “economic issues and poverty”, “equity and social inclusion”, “education and youth development” and “the judicial system and public safety” were most often mentioned as either topics discussed in conversations, raised as a challenge facing communities or as causes that inspire respondents to take action. It was no surprise, given the high rate of violence in Chicago and the recent events of 2016, that the topic of “the judicial system and public safety” was mentioned most often by survey respondents.

• On the Table becomes more reflective of the diverse population of the Chicago region every year.
Each set of On the Table survey respondents has become increasingly more diverse as participation has grown, particularly in 2016 with a large increase in Latino participation from 12% of the city of Chicago respondents in 2015 to 24% in 2016, which is much closer to the 26% figure for the percentage of Latinos in Chicago, according to 2014 census data.

• On the Table conversations generate new ideas.
In 2014 respondents were prompted to use their conversations to come up with and share new ideas for addressing community issues and challenges. In 2015 and 2016, while this was not an explicit ask, participants still shared ideas through open-ended responses and comments. In each of the three years, IPCE was able to extract and identify “big ideas” shared by respondents that run the gamut from local to regional, or from targeted neighborhood impact to broad policy implications. Ideas like supporting the growth of “food trucks in food deserts” as suggested by one respondent in 2014, to “creating a neighborhood ‘Find Your Cause’ expo where different neighborhoods have an opportunity to feature their key assets” as suggested in 2016. These and many more great ideas discussed tell us that On the Table has created a vibrant space and opportunity for idea-sharing.

• On the Table attracts very highly engaged people.
Respondents are engaged in their communities at an extraordinarily high level when compared with other residents in the Chicago area. For example, in 2016 54% of survey respondents have been an officer or served on the committee of a group or organization: a rate nearly five times higher than that of regional residents (11%). They also participate in a wide variety of civic, electoral, and political engagement activities—for example, high rates of volunteering or contacting an elected official were observed across the three years of respondents. The respondents are “doers” who seem to have a high propensity to take action. On the Table is attracting exactly the kind of community catalysts needed to turn conversations into action.

NEW: The On the Table report is now live online. View the impact highlights, read stories of real conversations, or dive into the raw survey data at www.onthetablereport.com.

The Chicago Community Trust puts out the call for participation in On the Table, but as an institution it cannot be present at every conversation, nor is that the intent. What is clear from the respondent data, and from the energy created by these conversations, is that the participants are heeding the call and making these conversations their own. Recognizing the opportunity to learn from each other, participants are going beyond the traditional notion of looking to the convener of an initiative—in this case the Trust—to spark change; they are clearly discussing possibilities and planning to take action themselves.

We know that solutions to the long-standing challenges our region faces will not be “quick fixes.” We are not naive in thinking that immediate outcomes of these conversations will bring about instant change. However, over time we are seeing these conversations begin to reconnect individuals at the human level, building the foundations of trust, empathy and collective action that can one day unify communities and strengthen the city of Chicago and the region.

All “fixes” have to start somewhere and On the Table has shown us that a good conversation is a great place to start.

You can view the impact reports, survey results and raw data from three years of On the Table at www.onthetablereport.com.