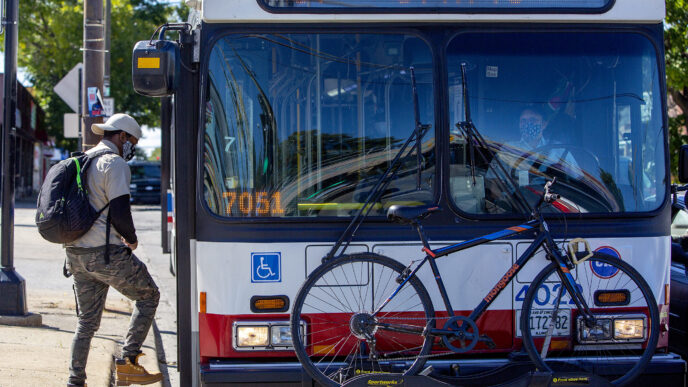 Moving Equitable Development to the Front of the Bus: ETOD as Policy in Chicago

I like to call myself a product of the public transportation system. My hometown, a mid-size city in the north of Spain, runs a network of frequently scheduled, clean, and safe buses that are widely used by residents. As a child and teenager, I was one bus ride away from public libraries, sports facilities, and downtown amenities. My neighborhood was one of the city’s poorest, but its connection to public transit made it feel different. Aboard those buses, I learned about sharing space with diverse people. I saved money. I developed healthy habits like walking. And I forged relationships: Thirty years ago, I met a stranger on a bus who became my best friend; today, I am her son’s godfather.

I immigrated to the United States in 2001 and chose Chicago because of its public transit system. Soon, I discovered its car-centric orientation: strip malls, drive-thrus, and curb cuts abound. Huge parking lots and garages are common. Pedestrian-only streets are rare. Critical assets like grocery stores, schools, and health clinics are often located far from train stations. Living without a car is possible, but not easy.

I became an urban planner to help Chicagoans end their car dependency: it harms their health, their pockets, and their environment.

Building healthy, walkable communities connected to transit is the mission of Elevated Chicago, a coalition founded in 2017 and housed at The Chicago Community Trust. We are a group of organizations and leaders building neighborhoods with people and racial equity at the center. We do this work to improve health indicators, combat climate change, preserve local culture, and save families a lot of money. Building community wealth is simply not possible if we force working families to spend thousands of dollars on car ownership and maintenance. The Trust knows this well: it is a founding member and consistent funder of Elevated Chicago.

To counteract car dependency, since 2013, the City of Chicago has offered developers incentives to build near transit. But the growth that ensued has been inequitable. In gentrifying communities, development contributed to the displacement of people of color and low-income families. And the incentives did little to stir interest in or attract development to disinvested communities, many of them majority-Black neighborhoods.

In 2021, we leveraged our initial $10 million to bring in another $10 million through the American Recovery Plan. That same year, we also secured a commitment from the Chicago Dept. of Housing to invest $800 million in affordable homes near transit. And, we co-created, with City leaders and 80+ organizations, an ETOD Policy Plan for Chicago.

This year, our advocacy – and quite frankly, pushing – led to the passage of Chicago’s first ETOD ordinance, named Connected Communities, approved by the City Council in July. This new legislation makes building affordable housing near transit cheaper and easier, saving developers millions of dollars. It makes CTA stations safer for pedestrians, bikers, and people in wheelchairs. It triples the amount of land eligible for incentives. What’s more, it will generate over 200,000 new jobs in the next decade.

In only a few years, we have moved Chicago to the front lines of the global ETOD movement. Some of you reading this have already joined our movement, and for that, we thank you. Others are still learning and watching. I invite you to connect with us on social media and to use public transportation as often as you can. You will be saving money. You will be fighting climate change and fighting for resident retention. You may even meet a friend for life.