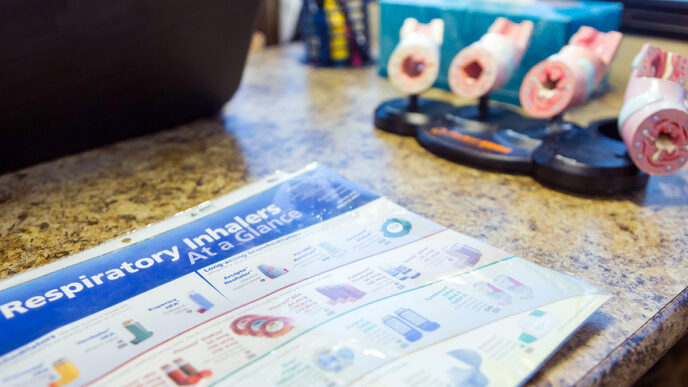 Mourning a Teenage Son, Fighting Back Against Asthma

Christopher Redding had only had one asthma attack before the one that killed him.

Christopher died in 2003 while jogging near his home in Lake Zurich. He was 18 years old: an outstanding three-sport athlete, a member of the National Honor Society, a service standout, leader and mentor. At the time of his death, he was home from his freshman year at Drake University on a Thanksgiving break.

The shock of Christopher’s sudden death and the sense of loss were devastating. But the following year, his parents Helen and Michael Redding began offering scholarships to service-oriented student-athletes at Lake Zurich High School, which Christopher had attended.

“We wanted to honor the person he was,” says Helen Redding—and for a while, those scholarships felt like enough.

A couple of years later, though, Helen Redding had a dream where she was holding the hand of a child. When she woke up, she knew her mission.

“It may sound strange,” she says, “but I knew I needed to help children with asthma.”

Helen Redding accompanies a mobile asthma screening clinic in Chicago’s Roseland neighborhood. After her son died from an asthma attack at age 18, the retired Citibank executive discovered her mission to educate other families.

Redding decided that her mission on Christopher’s behalf would be to fight the fear that often keeps asthmatic young people from playing sports and doing other activities that make for a full life. She would help disadvantaged children with asthma meet their disease head-on.

“The story here is about awareness and education,” she said. “It’s about carrying inhalers at all times. It’s about knowing what can happen. We were not aware of the seriousness of Christopher’s condition. This was his second asthma attack ever, and it killed him.”

When she retired from her job in 2013, Redding got right to work putting together the Christopher D. Redding Youth Asthma Foundation (CDR). Fortunately, she was no neophyte to philanthropy. A native of Memphis, Redding came to the Chicago area in 1968 to attend Elmhurst College, followed with a master’s degree in finance from DePaul University, and had worked for 41 years in the banking industry. Her last job was heading up Citibank’s Illinois community development effort, working with fifty nonprofit organizations and a budget of more than $1.5 million.

This summer, CDR awarded $2,000 college scholarships to two student-athletes who have asthma. The foundation is also partnering with the American Lung Association and Mobile C.A.R.E. Foundation on efforts to reach low-income communities, families and children with asthma education and screening.

The foundation Redding started in her son’s name now sponsors health outreach, as well as a summer camp for asthmatic children. “The story here is about awareness and education,” she explains. “It’s about knowing what can happen.”

In July, CDR sponsored 40 young people to attend Camp Aire in Manteno. The camp for asthmatic children is supported by the ALA and hosted by Presence St. Mary’s Hospital of Kankakee. In August, CDR accompanied a Mobile C.A.R.E. van to assist with screening at Kids Off the Block in Chicago’s Roseland neighborhood.

And that’s just the beginning, Helen Redding says. Her larger goal is to use sports as an entry point to get the word out about the importance of managing asthma.

“My passion is to ensure that no family has to suffer what we had to suffer,” Redding says. “I want people to know that asthma, when it’s not controlled, can kill.”