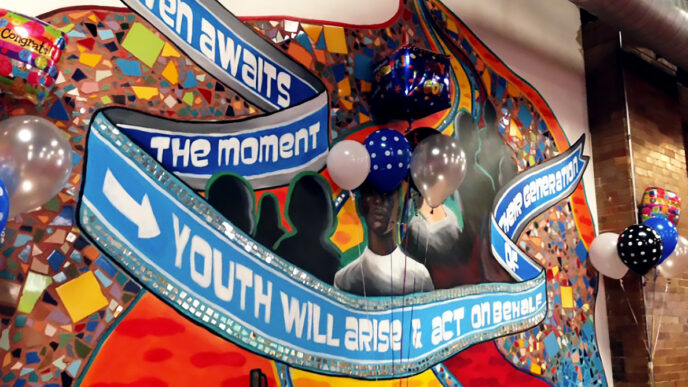 Curtis Johnson, 15, doesn’t like to talk about his former girlfriend’s suicide.

But her story inspired his new website and blog, Human Hands, which aims to raise awareness about depression.

Johnson and hundreds of other teens have launched websites this summer as part of the Smart Chicago Collaborative’s Youth-Led Tech program, a technology mentoring initiative in the Austin, North Lawndale and Roseland neighborhoods.

“I remember when I shared for the first time in years how I truly felt on a regular basis,” Johnson wrote in a blog post. “I had been so used to lying about it, I actually felt relieved when I shared. I felt a weight being lifted off my chest, and the more I shared, the easier it was to breathe.”

“After a few of my posts, I have told you to breathe. This is part of learning how.”

The six-week summer program, which runs from 10 a.m. to 4 p.m. Monday through Friday, teaches sophisticated technology skills and career development planning. It also builds students’ interpersonal skills, like curbing the impulsiveness that so often leads to violence.

Each student who graduates earns a laptop to take home, so they can continue their work.

“This is good for them because they’re not sitting at home or running in the street,” said Lamore Johnson, a Chicago 911 operator and Curtis Johnson’s mother. “I’m a single mom with six kids. I don’t have any trouble, and I want to keep it that way. Because in Roseland it seems like there’s always something going on.”

Students were encouraged to “buddy up and form partnerships” to achieve them, said Jatoya Thomas, 14. This strategy closely mirrors advice from the world’s top venture capitalists, who recommend entrepreneurs launch companies in teams of two to four.

Each day of the program began with a “mood check” and an icebreaker question that ranged from silly to serious. “If you could be any animal, what would you be?” “Name three ways you’re going to pursue your career goal.”

“They let you express your feelings and how you feel,” said Deniis Fletcher-Bey, 14.

Fletcher-Bey was sharply dressed in white pants, black dress shirt and black-and-white checkered bowtie for his graduation from the program, in the basement of the New Life Church on South Indiana Avenue in Roseland. His website focused on homeless services: a topic he said he chose because it supports his Eagle Scout project to feed hundreds of homeless people.

A display board features students’ reflections on the program. “On day four we went over job etiquette, like what’s not appropriate for a job interview,” reads one. “The Microsoft store also came by and gave a visit. They showed us how to work our tablets, and shared information that I never knew about.”

Students built their sites in WordPress, the most popular web publishing software in the world. Even billion-dollar businesses use a premium version of WordPress to power their sites. Topics ranged from an e-commerce site for designer sneakers to obesity prevention and helping prisoners re-integrate into their communities upon release.

Using WordPress “was actually really easy,” Curtis Johnson said. “Way easier than I thought it would be.”

At New Life Church, students from the Roseland program wait to be called to the stage. Every student who completes the six-week program is given a laptop, so that they can continue to practice their skills and build a business.

Students also set goals and were encouraged to “buddy up and form partnerships” to achieve them, said Jatoya Thomas, 14. This strategy closely mirrors advice from the world’s top venture capitalists, who recommend entrepreneurs launch companies in teams of two to four. Further, most digital products are built using the “pair programming” technique, in which one programmer writes the code while the other reviews each line as it’s created.

“I already was a future person,” Thomas said. “I want to own my own hair shop, but I got the idea to partner up with Mekari because her parents own a nail shop. And it’s a place where I can get started practicing and stuff.”

Career planning was so engrained in the students of Youth-Led Tech that when asked about his career goals, Fletcher-Bey produced a Plan A, B and C. Plan A is to be a professional athlete. If that doesn’t work, then it’s restaurateur. If that doesn’t work, he wants to become a lawyer. When told that being a lawyer sounded less exciting than the others, Fletcher-Bey replied, “Not really. It doesn’t sound boring because I’m helping my community.”

Throughout the program, students meet and learn from guest speakers in the tech sector—like Adam Hecktman, Microsoft’s Director of Technology & Civic Innovation for Chicago, who spoke at the graduation ceremonies.

Curtis Johnson said he plans to attend West Point and that, through a classmate in the program, he met someone who could help obtain the necessary Congressional endorsement. Like Fletcher-Bey he praised the program for allowing him to be candid.

“A lot of things I would have kept into myself if it wasn’t for the program,” Curtis Johnson said. “They encouraged me to use my personal experiences in some of the blog posts so I could be relatable.”