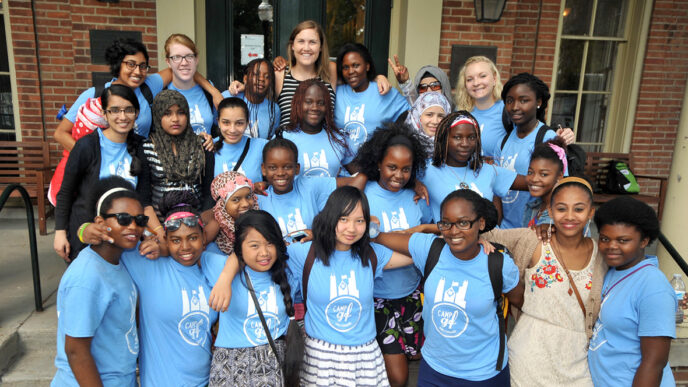 When Blair Brettschneider began tutoring immigrant students after work in 2010, she had no idea it would change her life—and many others.

One student in particular, a girl from war-torn Burundi named Domi, had an especially strong impact on her. “Even though her father had been killed and she had just come to Chicago with her mother and five siblings, Domi was so hopeful and optimistic,” Brettschneider recalls. “She wanted to go to college to be a nurse, but she didn’t see the challenges. She was just learning basic English and barely getting through high school. I didn’t want her to wake up one day and realize she couldn’t achieve her dreams. I felt like I had to help her.”

And with that, Brettschneider—just 21 herself at the time—began sowing the seeds for GirlForward, a grant recipient of The Chicago Community Trust that provides adolescent refugee girls with mentorship and educational opportunities that empower them to be strong, confident and independent as they adjust to life in the United States. She has since received many accolades for her philanthropic work, including the CNN Hero Award in 2013.

[pullquote]“Philanthropy is just doing what you can”: Q+A with Blair Brettschneider of refugee mentor program @GirlForward[/pullquote]

We recently caught up with Brettschneider, 26, to talk about how philanthropy has long been a critical driving force throughout her life.

A: To me, philanthropy means giving with no strings attached. Philanthropy comes from the genuine desire to do good for others.

Q. What is your earliest memory of philanthropy?

A: When I was very young, my parents had signed up for one of those programs that involved giving a certain amount each month to a family in Kenya. There was a boy in the family who was about the same age as me named Duncan. Every so often, we would get a letter from the family. I would always get excited when I found out that the money was doing something—one year, they were able to buy a new goat. Whether or not Duncan and his family had a goat probably doesn’t have much to do with my life, but we wanted good things for them all the same.

Q. How did you learn about philanthropy?

A: Philanthropy has always been a part of my life. Growing up, my mom was very involved in organizations like the Junior League. She was always planning fundraisers and volunteering at local women’s organizations, and she would bring me along. Whether it was a big event or just Christmas shopping for the family we picked off the tree at church, my family really raised me to consider giving an essential part of my life.

Q. In your life, who has been the most generous to you?

A: That is a really difficult question. So many people have been generous to me in different ways. My mom has given me so much—time, resources, love, everything.

In my current work, I’m often amazed by the generosity of others. We just launched our program down in Austin, Texas. Early on, a woman named Jo reached out to me because she was interested in getting involved. It’s easy to become a little skeptical of people—not just after doing social impact work, but in life in general—and in the beginning, I kept waiting to see what we were going to have to do for her or what her real motive was. But her motive has just been kindness and generosity. She has taught me to remember that this goodness does exist, even when there’s so much distracting from it.

Whether or not Duncan and his family had a goat probably doesn’t have much to do with my life, but we wanted good things for them all the same.

Q. Tell me about a time you felt fulfilled by your philanthropy.

A: When I was a volunteer for a refugee-serving organization when I first moved to Chicago, a co-worker and I noticed that many of the families arriving in the winter did not have proper winter coats. We found a website that connects coats to people who need them, and that brought us to a principal for an elementary school in Woodlawn on the South Side. She was organizing a coat drive and wanted to give the coats to us.

After the drive, my co-worker and I picked up bags and bags of coats from her apartment and gradually distributed them in a box at our office because there was no space for storing donations. Each day we would put the coats in the box before adults came for English class. Each day they were gone within an hour. This was really meaningful to me not only because people who needed coats were getting them—the school where this principal worked was by no means well-resourced. Those families were certainly struggling, too. But that didn’t mean they wouldn’t or couldn’t give.

Philanthropy has nothing to do with being a billionaire—it’s just doing what you can.

Q. What motivates or inspires your philanthropy today?

A: Because I spend so much time in the world of refugees, girls and education, I love hearing about innovative ideas and solutions in fields totally outside what I think about in the day to day. The time and resources I give to my own work with GirlForward is inspired by the incredible girls I get to see on a daily basis.

When I have the opportunity to give elsewhere, I’m really inspired by smart people who have taken it upon themselves to solve really complex problems. As someone who started an organization, I like my fellow founders to know they have a friend cheering them on, even if I can only cheer them on with a $10 bill.