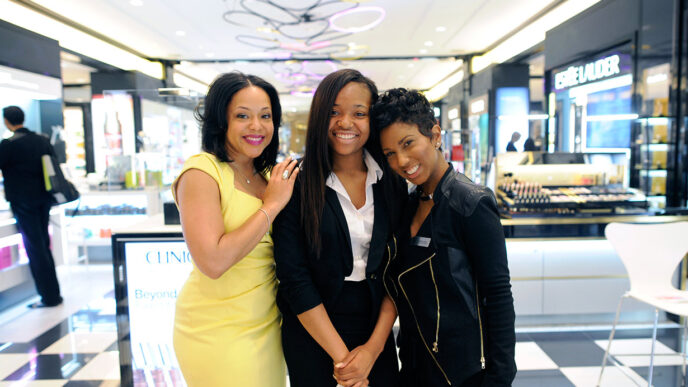 A speech pathologist by training, Fair previously managed a research studies and national marketing program for a major text book publisher. And she was successful—rising to become one of the highest ranking African Americans at the company.

One day she asked a co-worker what usually happened to old books and products. The answer shocked her.

Reeling, Fair tried to convince her boss to donate the products to the United Way or local day care centers.

“I didn’t feel like I would get the support to do that, so I knew it was time to make plans to move on,” she says. “I wanted to have a direct role, impacting young people on the South Side of Chicago, where I’m from. So I left.”

Stepping out on faith, Fair took a part time job as a bank teller and started researching nonprofits in Chicago to learn more about the type of organization she wanted to run.

“I started off with a monthly women’s group. We started connecting and networking,” she says. “I smoke-screened it as a book discussion.”

At the same time, she was creating the blueprint for Polished Pebbles.

“I was contracting with another program and we were working with a group of girls. The Chris Brown and Rihanna situation was big news. About 80% of the girls thought Rihanna somehow deserved what happened to her. That was my call to action.”

Fair moved quickly, enlisting the women from her book club to recruit girls they knew from the neighborhood. Domestic violence experts came out to talk with the young women.

Today, Polished Pebbles serves over 1000 girls, ages 7 through 17, at over 40 sites, including Chicago Public Schools and the Chicago Housing Authority.

Communication is at the core of the Polished Pebbles experience.

“This is where my speech pathologist hat comes into play. We make sure our young ladies are great communicators in the home and at school,” she says. “Our mantra is S.H.I.N.E.— Smile, (say) Hello, Introduce (yourself), Nod (your head) and End (the conversation). We teach the young ladies to think about how and what they are communicating, their body language, their appearance and how they represent themselves on social media.”

The program has a career focus as well, with business partners including impressive companies like Bloomingdale’s, Microsoft and Blue Cross Blue Shield. The school year wraps with a culminating event where participants tour the business site, engage employees, job shadow and participate in mock interviews.

A participant in the Polished Pebbles program shadows a sales associate at Bloomingdale’s, learning workplace skills and building confidence

Fair knows firsthand just how much this type of exposure can impact a young woman.

“The women who came to my school for career day made me want to go to college,” she says. “I don’t remember their names or what they even said. Just seeing them sparked something in me.”

Fair herself has sparked something in the young women with whom she interacts. At a recent job shadow event at Bloomingdale’s, the young women in the room were asked to identify their role models. Some listed their mothers, one name-checked Michelle Obama. But Miguela, a freshman at Morgan Park High School, singled out Ms. Fair, saying she wanted to grow up to “mentor young girls.”

And more mentors are needed. Fair believes the young women she works with are often overlooked in discussions about youth achievement and youth safety.

“A lot of attention is on young black boys in urban cities. And rightfully so,” she says. “But people don’t realize our girls are growing up in the same communities, facing the same threats of violence. Research shows black girls are leading the pack in in-school suspension, expulsions, out of school suspensions. We are, quite frankly, dealing with a crisis and I don’t think the general public is aware.”