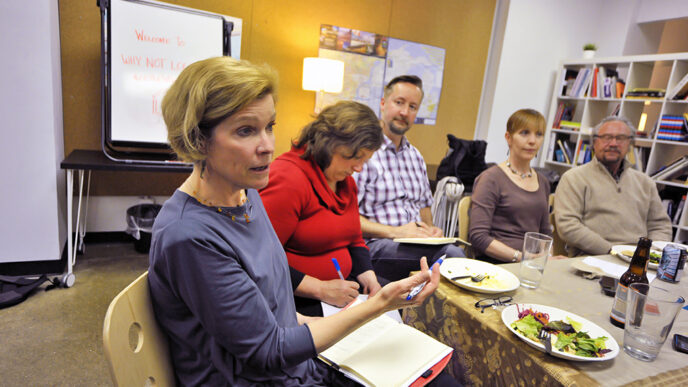 Matchmaking for a Manufacturing Renaissance in America’s Cities

More products could be made in American cities like Chicago. But for that to happen, the local “idea people” and the people who run established factories need to realize how much they have to offer one another.

That was the message at an On the Table dinner in the West Loop hosted by DesignHouse, a Chicago-based national nonprofit that aims to help designers and entrepreneurs learn how to get things made in their region.

“We’re creating a method to teach designers how to take that product and make it locally,” said Emily Taylor, DesignHouse’s design director.

At a mealtime conversation as part of On the Table 2016, Chicago entrepreneurs, manufacturers and workforce leaders gathered to talk about the future of urban industry in America.

To an entrepreneur just getting started, Taylor said, jumping to a factory overseas may look like the easiest thing to do. Business people and designers typically study how to market and brand their products as part of their education—but they learn very little about the mechanics of production. Many have never been down on the floor of an American factory.

That’s where DesignHouse comes in. The organization plays matchmaker at “jams” it hosts for designers and entrepreneurs, brainstorming ideas and screening videos it’s created to show off the capabilities of local factories.

It runs internships, too, in which groups of design students make products they finance creatively and follow onto the factory floor. In between these efforts, DesignHouse encourages everyone to think outside the box at every turn.

Organizations like DesignHouse, which works to connect artisans with manufacturers in order to help each unlock new capacity, are helping a new generation of American makers to shape an urban industrial ecosystem for the next century.

Funding for the project came from a Kickstarter campaign; DesignHouse found the manufacturer first, then designed a product that fit Skol’s capabilities.

That’s the DesignHouse model: a “farm-to-table” approach, Taylor said. The paradigm: Here’s what we’ve got; what can we make?

Most of the participants had ties to the do-it-yourself “maker movement” that has been bubbling up all over the country. They agreed that artisanal or “small-batch” manufacturers—including craft breweries and distilleries, high-end chocolatiers and other gourmet food producers—may be the bellwethers of a manufacturing renaissance.

To an entrepreneur just getting started, a factory overseas may look like the easiest option. Business people and designers typically study how to market and brand their products—but they learn very little about the mechanics of production. Many have never been on the floor of an American factory.

Together, this generation of American makers can create tremendous synergy, and a home for manufacturing. Working on a different scale than the industry of the 20th century, they add to the tax base and generate jobs that become careers for trained workers.

The full range of innovations that will light the path are still forming, but “high value added” processes and products will emerge, said Estes, a former CEO and technology entrepreneur, who sees parallels between the software advances of the early 80s and the manufacturing potential in today’s emerging 3D technologies, sensors and digital linking.

The hope is to create an industrial ecosystem that “will make us more future-proof,” said Hatch, an award-winning designer, president of global industrial design firm TEAMS Design and a champion of the role of design in boosting economic development.

Kaplan agreed that manufacturing can be done in Chicago. His company, Inventables, is a design-oriented online “hardware store” selling tools and materials to make working with the 3D carving machines Inventables also manufactures “easy and inspiring.”

A centerpiece of the dinner table was the Reveal photo frame, created by DesignHouse in cooperation with Skol metal fabricators, located in Ravenswood. The product is inseparable from the partnership: DesignHouse found the manufacturer first, then created a striking, elegant design that aligned with Skol’s production capabilities.

Inventables’ design team is based in the West Loop, and the production facility is in west suburban Burr Ridge. At this point in the company’s development—and even with 325 component parts made in a number of different countries—it makes more sense for the designers to be “close to the line.”

Parisi told the On the Table group about his product Guard Llama, a hand-held remote that that can be activated to alert the police about an attack or other emergency, complete with medical information and GPS location. So far, said Parisi, his company has found tooling to be too expensive to do locally; he sends the bulk of his manufacturing to China.

“The hybrid approach is one we all need to understand,” Estes explained. Even as the goal is to keep more steps of the manufacturing process in local communities, “manufacturers naturally migrate to the center of excellence” for tooling, electronics and other necessities—whether that’s Chicago, Kentucky or China.

DesignHouse founding partner Susan Page Estes sees an emergence of “high value added” processes and products that will shape the future of American manufacturing. A former CEO and technology entrepreneur, Estes draws parallels between the software advances of the early 1980s that revolutionized industry and today’s emerging technologies like 3D printing, sensors and digital linking.

Cornett is in the very beginning stages of making injection-molded silicone/plastic covers for bike shoes, still pondering the logistics of how to get “100 of them to put out on the street” to see how well people like them. She would like to make her covers in Chicago.

As Nelson explained, “Some people are starting to bring their manufacturing jobs back to the United States” for just that reason. What Cornett and other Chicago makers can find in their own backyard is a factory that’s flexible in its practices, and eager to find a way to make their product—and Chicago—work.