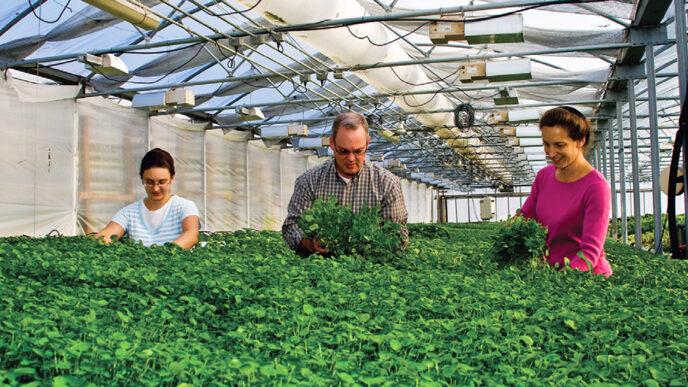 Mapping the Next Agricultural Revolution

Farming in Illinois is big business—and not just for the farms that are big.

Accounting for nearly 10 percent of the state’s total economic output, Illinois’ food and agricultural system is a mosaic of large-scale farms selling commodity crops for export and smaller farms that nourish a burgeoning local food culture. Economically, the climate for both kinds of agriculture is ripe for growth.

But perhaps due to their disparities in size, or to the perceived cultural distance between the Chicago region and the rural areas of the state, commodity farms and more locally oriented farms have largely remained confined to their own silos when planning strategically to expand their markets.

Fortunately, with pivotal seed capital from the Searle Funds at The Chicago Community Trust and leadership by Kinship Foundation, the private operating foundation that manages the Searle family’s institutional philanthropy, a project designed to bring all groups to the table is replacing this outdated parochialism with a revolutionary partnership.

Launched in 2014, the Food and Agricultural RoadMap for Illinois, or FARM Illinois, is a pioneering planning initiative that, for the first time, integrates leaders from every realm within the state’s food and agricultural system to identify the policies and investments necessary to ensure their collective prosperity.

The Chicago region consumes $14 billion in produce annually—yet just 5% of that is farmed locally.

“The truly innovative feature of the FARM Illinois planning process was its ability to hold those meanings together in a comprehensive, system-wide conversation about how to capitalize on the economic opportunities of global export commodities and local and sustainable food,” Meers says. “The resulting recommendations leverage the food and agriculture sectors to create significant economic, health and environmental gains.”

For the Trust, FARM Illinois exemplified the value that can be unleashed through its strategic philanthropic partnership with the Searle family and Kinship Foundation.

The Searle family has long supported projects that focus on economic development and environmental conservation. The investment in FARM Illinois extends that support to the Chicago region’s local food economy.

After all, the Chicago region consumes a whopping $14 billion in produce annually—yet just 5 percent of that is farmed locally.

That discrepancy reflects an ample opportunity: If regional farmers can account for a higher share of the food consumed locally, they will not only turbocharge the local economy, but they’ll help curb the environmental costs incurred from importing food from elsewhere.

When rumblings began about formulating a statewide food and agricultural strategic plan, Kinship Foundation and the Trust were already in the infancy of a Chicago-region initiative, known as Food:Land:Opportunity – Localizing the Chicago Foodshed, aimed at a similarly coordinated and cross-disciplinary effort to develop the region’s local food economy.

Nearly 150 experts in fields from food and agriculture to community development and infrastructure contributed to the FARM Illinois plan, a landmark blueprint for the stewardship and continued prosperity of the state’s agricultural economy.

The Searle family saw FARM Illinois as an opportunity to ensure that statewide strategies to promote the state’s agricultural economy accounted for every source of food production—from globally destined commodities to community-oriented local fruits and vegetables—as well as the mechanics of getting those resources to both paying consumers and those afflicted with food insecurity.

“Without the leadership of the Trust and commitment of the Searle family looking for a more just and suitable system of food and agriculture in Illinois, FARM Illinois wouldn’t have happened,” says Lee Strom, FARM Illinois director and former chairman and CEO of the Farm Credit Administration. “There’s never been an effort that’s brought together so many various stakeholders together in collaboration, which highlights the uniqueness about FARM Illinois.”

To be sure, the opportunity for growth is blossoming across Illinois’ food and agricultural system.

Fueled by surging economies in Asia and other developing areas of the world, the global demand for the corn, soybeans and other “row crops” raised on Illinois commodity farms is escalating exponentially.

Meanwhile in the Chicago region, an expanding appetite for “local food”—produce and proteins originating within the region, cultivated using sustainable practices, and sold fresh to consumers through farmers markets, farm-to-table restaurants, grocers, large institutions and home-delivery subscriptions—could lead to an economic field day for smaller farms.

If regional farmers can account for a higher share of the food consumed locally, they will not only turbocharge the local economy, but they’ll help curb the environmental costs incurred from importing food from elsewhere.

And yet challenges loom. Despite the state’s agricultural plenty, hunger and food security—ensuring that everyone has access to adequate daily nutrition—remains a chronic problem both globally and locally.

The specter of climate change, meanwhile, puts a higher-than-ever premium on innovation that can reduce the environmental impacts of farming and food production. And the condition of the state’s transportation infrastructure—the conduit by which goods travel to market—will also be a key factor in Illinois’ competitive capacity.

From Process to Prosperity

FARM Illinois took root in 2014. It established the FARM Illinois Leadership Council to conduct a rigorous review of the state and Chicago region’s strengths and weaknesses in the food and agriculture sector. Led by Dr. Robert Easter, president emeritus of the University of Illinois, the council was made up of 39 leaders in agriculture, sustainability, community development, infrastructure, global and local food security and other concentrations germane to the state’s farming economy.

They worked with nearly 150 experts in the food and agriculture system for nine months to develop recommendations for the FARM Illinois plan, a landmark blueprint for the stewardship and continued prosperity of the state’s agricultural economy.

Released in May 2015, the FARM Illinois plan features 23 specific recommendations organized in six strategic priorities: leadership for innovation, business development and entrepreneurship, workforce and education, resource management, infrastructure and branding and marketing development. They focus on how the food and agriculture system can generate solid economic growth, create jobs and new technologies, preserve the environment, provide nutritious food, help underserved communities and continue to build upon the state’s supply of local and sustainable food.

To prevent the plan from becoming a relic, FARM Illinois is supported by a small staff that will provide ongoing capacity to advocate for recommendations in the plan, including embarking on a new public awareness and branding campaign to tout Illinois food and agricultural assets and hosting an international food and agricultural summit akin to the World Economic Forum in Davos, Switzerland.

“The benefits of bringing food and agriculture leaders together is evident in the FARM Illinois plan and precisely why the Searle Funds supported its development,” says Renee Michaels, vice president of Kinship Foundation. “We look forward to following the implementation of the strategies outlined in the roadmap.”

“With all of us working together, we will be able to do so much more,” Strom says. “We’re bringing together concepts and mutual goals that that will drive growth across the state.”