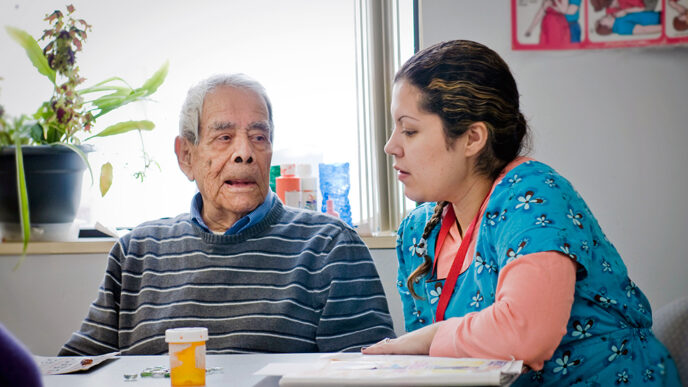 Chicago's Casa Central is among the human service providers hit hardest by cuts in state funding between 2015 and 2016.|A screen shot from the "heat map" tracking the decline in spending by IDHS from 2015-2016. Users can interact with the maps and source data at http://rpa1.maps.arcgis.com/apps/MapSeries/index.html?appid=0bdedfb786734d60bf67fd0898850b52

“The state has intentionally outsourced essential services to its nonprofits to care for and serve its most vulnerable residents. These nonprofits have efficiently and effectively provided services… but the state has failed to fulfill its part. The budget impasse has left nonprofits with staggering bills and debt, resulting in layoffs and service cuts.”

That’s according to The Chicago Commmunity Trust’s president Terry Mazany and the leaders of two other Chicago philanthropies, in a recent editorial for Crain’s Chicago.

But what do those cutbacks look like on the ground, and which parts of our state are shouldering the heaviest burden? A new release from Illinois Partners for Human Service tells the whole story by the numbers.

Illinois Partners, a statewide organization of more than 850 human service agencies supported by a grant from The Chicago Community Trust, analyzed data to map the impact of the decline in payments to human services organizations: a dropoff of $383 million between 2015 and 2016.

Their report The Damage Done: How Illinois Is Unravelling Its Human Services shows the effects of spending cuts felt throughout the state, from urban to rural, Chicago and downstate, Democratic districts and Republican—“totally bipartisan,” in the words of Illinois Partners executive director Judith Gethner.

“The declines were all across the board,” Gethner said.

A screen shot from a “heat map” tracking the decline in spending by IDHS from 2015-2016. Created by Illinois Partners for Human Service, a new online report lets users interact with maps and source data to view the statewide impact of service cuts since 2015.

Through Freedom of Information Act requests, Illinois Partners obtained spending data from the state Department of Human Services and Department on Aging. They created interactive online “heat maps” to represent the effect across the state. Users can explore the data by organization, by community, by Senate district or by the type of program cut.

At the Department of Human Services, for example, funding for emergency and transitional housing services to prevent and end homelessness has been almost entirely eliminated, with a 95% decline. The Parents Too Soon program promoting healthy development for children of teen parents has seen a 76% funding reduction; domestic violence intervention services a 30% reduction.

The Department on Aging, meanwhile, has cut funding to support community care program by $188 million, in addition to significant funding cuts to home-delivered meals, adult protective services and family/caregiver support.

In addition to the current costs of these cuts, the report details the costs that lie ahead. “Without these programs in place, tens of thousands of Illinoisans go without treatment—which can lead to increased prison recidivism and emergency room usage, greater strain on limited police and 911 call center resources and contribute to rising drug abuse and unemployment rates.”