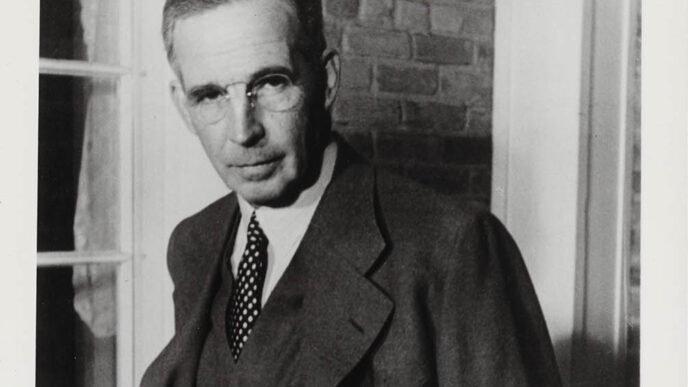 One of the most influential individuals in Trust history, Ryerson lived his life as an exercise in philanthropy and civic duty. Named to the Executive Committee during the Great Depression in 1931, Edward L. Ryerson of Inland Steel (then Joseph T. Ryerson & Company) remained on the committee for 27 years, the last 14 as chairman.

Ryerson and Frank Loomis forged a working partnership as close as, if not closer than, the one Loomis had made with Clifford Barnes. Together they made significant strides in developing the structure and operations of the Trust.

In 1949 it was Ryerson and Loomis who made the crucial first steps toward founding the national membership organization that today represents foundation work: the Council on Foundations.

Ryerson, with Hermon Dunlap Smith, represented a new breed of businessman that emerged in the 1930s — the manager. While the original Trust founders acted as entrepreneurs, Ryerson and Smith brought growth and diversification to the structures of the Trust that were already in place.

[pullquote]Edward Ryerson of Inland Steel lived his life as an exercise in philanthropy and civic duty.[/pullquote]

Ryerson was an intimidating man, but not stuffy. He was a talented amateur magician who loved entertaining children while dressed in costume.

He never forgot the misery he witnessed during the Depression, even during the bitter strikes that marked the steel industry in the middle decades of the twentieth century. He had deep feelings and beliefs upholding the dignity and worth of human beings.