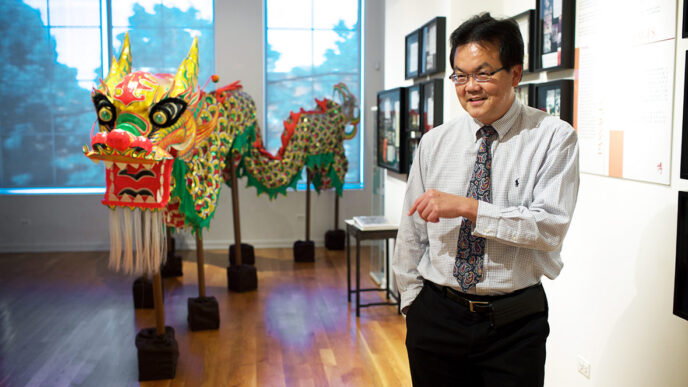 Dr. Kim K. Tee, one of the six founders of the Chinese American Museum of Chicago, came from modest beginnings. One of 13 children born to Chinese refugees who fled to Malaysia, Dr. Tee credits education, working hard—and most importantly, luck. As someone who has donated his time in a variety of ways, the orthopedic foot and ankle surgeon has helped create a legacy for the Chinese community in Chicago and supported causes around the world, too.

[pullquote]Chicago surgeon + museum founder: “My final dream is to make sure orphanages are taken care of worldwide”[/pullquote]

The Trust visited the Museum to talk about philanthropy with Dr. Tee and examine what inspires him to give back.

Q. What is your earliest memory of giving back?

A. I believe I was born to give back because as a child in high school, I volunteered for the Red Cross in Malaysia. I think being a part of the Red Cross allowed me to become sympathetic towards orphans in Malaysia. Where I grew up, there were thousands of children who were born with disabilities and their parents would dump them in an orphanage. It is this tragedy that prompted me to give back to my own community.

Since I graduated from medical school at Dr. Scholl College of Podiatric Medicine, I have gone on many trips to Malaysia to help them out and expand the facilities there. My final dream is to make sure orphanages are taken care of worldwide. That is my last dream before I die.

Q. Is Malaysia where you are from originally?

A. Yes, I was born and raised in Malaysia, but my parents were born in China. That makes my birth country Malaysia, ancestral country China and adopted country America. That makes me an “MCA”: Malaysian, Chinese and American.

Q. How did the Chinese American Museum of Chicago come to be?

A. I chose to establish the Chinese American Museum of Chicago to provide the surrounding community with a social space to showcase Chinese history and culture. When I first got involved in the Chinese community, I realized that Chinatown needed help putting resources together in order to have a larger impact.

Initially, we did not have a museum. We only gave free lectures in the Chinatown Public Library. Right after September 2011, however, a group of us put our heads together, rolled up our sleeves and started working. In the past, there were attempts in starting a museum, but they failed. So we started.

Q. How else are you involved in giving back?

A. I’ve been involved in many projects beyond my work in the museum. Chinatown is a close-knit community where people know everyone. They often join forces to form a coalition to move things forward. I sat on the board of the Chinatown Chamber of Commerce for one term and I was also involved in neighborhood cultural activities, such as Chinese New Year celebrations. Incidentally, when I got involved, I ran into the opportunity to volunteer for the Beijing Olympics in 2008 at the National Aquatic Centers. But in that situation, it was about giving back to the Chinese and Chinese American community.

When I give back to a community, I like to give my greatest asset. I offer what I know best. When a tsunami struck Malaysia in 2004, I organized a fundraising campaign in Chicago that helped the Red Cross’ Chicago chapter. They raised several million dollars and expanded worldwide to China, New York and Rio de Janiero.

Q. What is the greatest act of kindness you have ever experienced?

A. Once, someone collapsed in a restaurant and had a cardiac arrest in an isolated area of Michigan. The nearest hospital was thirty minutes away. I started CPR and successfully revived her. That was the most memorable moment where I gave back to an unknown individual. To this day, I do not know if she survived, but the good news was that she had a heartbeat after I performed five minutes of CPR on her.

Q. What advice do you have for others who want to give back?

A. I was very fortunate that I grew up below the poverty level because it made me work very hard. With great opportunities and a little bit of luck, I was able to finish my education. I think I got a lot of support from the community, so it is my responsibility to give back.

For advice to others, it’s not exactly being successful in life, but more so about offering up what you do best to help others.

I don’t take things for granted because I remember how it was growing up poor. They say you should give more than you receive, and I’ve always believed in that. As a child growing up and being involved in nonprofit organizations, I would always give, give, give and never receive. Everything that we receive, we work hard for. This means that there’s value in terms of what I get in return. That’s how I was raised and that’s how I am. I was born this way.