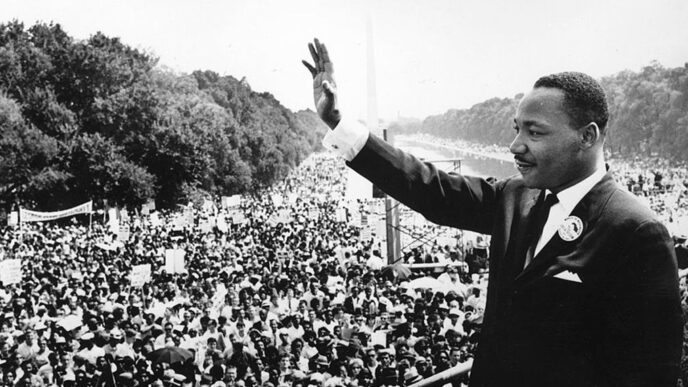 I was born the year Dr. King became a national figure, leading the bus boycott in Montgomery.

I was 13 years old when he was killed.

So like so many, I was left to interpret his legacy through the remembrances and writings of others.

Over time that legacy evolved to something that the mainstream could be comfortable with, something palatable. He was cast as the dreamer. A brilliant orator, who preached nonviolence and dreamed of a color-blind society where race did not exist and we all just got along.

But we all know Dr. King was much more than a minister with a dream. He was a fierce social justice warrior who called out economic inequality, spoke out against government-sanctioned violence and shed light on the darker sides of American capitalism.

Remember, the King who spoke of the “dream” also said this: “The disposed of this nation—the poor, both white and Negro—live in a cruelly unjust society. We must organize a revolution against the injustice, against the structures through which the society is refusing to take means which have been called for and which are at hand, to lift the load of poverty.”

Now we all know that talking about a revolution can be threatening because, by its nature, it challenges the balance of power.

Dr. King was much more than a minister with a dream. He was a fierce social justice warrior who called out economic inequality, spoke out against government-sanctioned violence and shed light on the darker sides of American capitalism.

It isn’t surprising that we focus so much on MLK as dreamer. In his speeches leading up to the march on Washington, King kept returning to two themes. One was, of course, the dream.

The other was, in a way, the nightmare. The nightmare that we’d begin to accept injustice as normalcy.

In fact, the speech he took to the podium at the March on Washington, the typed copy that was handed out to the press that day was entitled “Normalcy—Never Again.”

Had Mahalia Jackson or perhaps his own inner voice not implored Dr. King to “Tell them about the dream,” we might refer to that speech as the “Normalcy” speech.

A speech in which King would have said, as he had said before:

We’re bombarded with so many daily outrages that it’s easy to get numbed or paralyzed by things we shouldn’t accept as normal.

Is it normal that America is the richest nation in the world, but 40 million of our citizens are living in poverty?

Is it normal that we spend more on healthcare per capita than any other nation in the world, but our people are living shorter, sicker lives and our infants die at higher rates compared with those in other rich countries?

Is it normal that America has the highest incarceration rate in the world and imprisons its residents at a rate nearly five times the average for other rich nations? That is not a justice system; that is an injustice system.

And if other nations can do better, then here in the richest nation in the world, poverty and inequity is a political choice, not a monetary one.

It’s a choice to accept the abnormal as normal. To accept the unjust as just. To become complacent.

But what about Chicago? Have we slipped into complacency too? Are we content to let the abnormal become normal?

What can you say when a daughter of our city, an honors student and drum majorette, can perform at a presidential inauguration one week and then be gunned down the next? Or when the life of a son of this city is cut short not by one but by 16 bullets? Not normal.

Or that in this city, for every $100 in white family wealth, a Latinx family holds $12 and a Black family just $10 of wealth? That’s about a ten-fold difference, almost five times the national average in racial wealth gap. We just can’t accept that as normal.

So it is here in Chicago—precisely because these divisions are so pronounced—that we have a specific responsibility—and a significant opportunity—to be repairers of the breach. Big problems require even bigger solutions. And I think Chicago is up to the challenge!

I came to Chicago after almost three decades of working on the challenges of health and economic inequity globally. I went from global to local because I had become increasingly troubled by the divisions that only seemed to be getting worse here in my own country. I thought that coming to The Chicago Community Trust, an organization that had helped create positive change for over a century, was a tangible way that I could help to tackle the large and looming challenge of racial and economic inequity in America.

That is why I am so pleased that we have decided that closing the racial wealth gap will be our highest organizational priority.

What can you say when a daughter of our city, an honors student and drum majorette, can perform at a presidential inauguration one week and then be gunned down the next? Or when the life of a son of this city is cut short not by one but by 16 bullets?

Since coming to Chicago just over a year ago, I have found a city that has an amazing history of accomplishing big goals through corporate, civic and community partnerships unlike any city I have ever lived in.

This is the city of Jean Baptiste Point DuSable and Daniel Burnham.

This is the city that makes no small plans.

But it isn’t just government or top-down leadership. I am also inspired by the many examples I have seen in this city of ordinary citizens: people like Jahmal Cole, honored here today, who founded My Block, My Hood, My City to help young people overcome poverty and isolation.

Or Otis Monroe’s Get Cleared campaign to help formerly incarcerated persons get their criminal records cleared so they can gain meaningful employment and not end up back in jail.

Or Mayra Hernandez and Jesse Iñiguez of Back of the Yards Coffee, who donate a dollar for every bag of coffee sold to provide scholarships for youth in that neighborhood.

These are examples of people who are refusing to accept an unjust normalcy.

But while it is inspirational to go block by block… this is a city of nearly 21,000 blocks.

And while it is inspirational to go child by child, this is a city of nearly 600,000 children.

And yes, it is inspirational to help the formerly incarcerated get work, but 70,000 people are released from Cook County Jail each year.

What will it take to assure an equitable, fair and decent standard of living and equity of opportunity for all Chicagoans?

I think we know many of the answers. Things like continued improvements in education, affordable housing and home ownership; access to good jobs with living wages; expanding safety nets to increase financial stability; investing in disinvested communities; police and criminal justice reform.

But without a real commitment and political will to examine the underlying systems, policies and politics that hold racial and economic inequity in place, it will be like trying to empty Lake Michigan with a teaspoon.

We need more. More attention. More focus. More resources. But as much as anything we need to maintain political will. We need policies that include equity and inclusion as essential. That build on the examples that show that trade-offs between downtown and neighborhoods set up false dichotomies.

We need more policy makers who see beyond their own backyards to understand the power of the greater whole. And more than ever we need a sense of urgency—as Dr. King said, we need the fierce urgency of now.

Which brings me back to Martin Luther King.

In his later days, Dr. King’s focus expanded to tackle not only racial inequity but also economic inequity. He increasingly recognized there was no trade-off between the injustice of racism and the injustice of economic disenfranchisement.

He built the poor people’s movement understanding the relationship between race and class, and the belief in the power of a broad-based multi-racial coalition in service of ending economic inequity.

He called for, as previously noted, a “revolution against that injustice.”

In order reclaim justice, we have to face a difficult fact: Today injustice is our normal.

But we can make justice be our new normal.

We can create a city where equity is our new normal.

Where safety is our new normal.

And opportunity is our new normal.

If we do this, we will not only overcome; we will thrive.

Chicago, we can be that beacon, that model that the rest of the nation looks to. And we can create and grow the beloved community that honors Dr. King’s legacy—one that is truly worthy of our shared potential and collective promise.