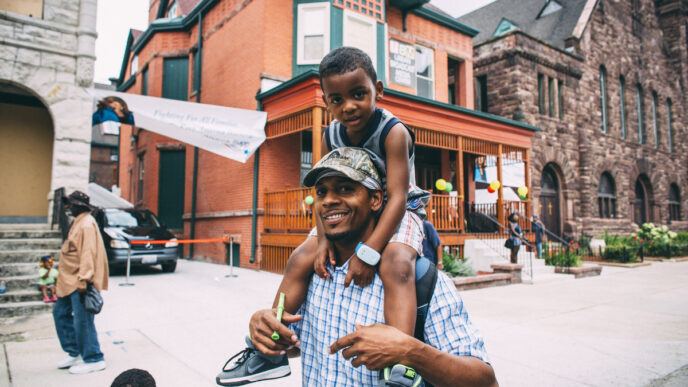 There’s a political game playing out in Washington, and the stakes could not be higher. Will the debt ceiling be raised? Will major infrastructure legislation cross the finish line? There is a lot of talk about numbers, and yet a lot less talk about the people that stand to be impacted.

Putting food on the table. Making rent. Keeping kids clothed and safe. Getting to and from work. That’s what every parent, whether Black, Latinx, or white, thinks of each morning as they send their kids off to school. Thanks to the expanded Child Tax Credit (CTC) and the Earned Income Tax Credit (EITC) passed as part of the American Rescue Plan Act, millions of families are worrying a bit less every month. But that worry might soon return without Congress’ leadership.

As community foundation leaders from across the country, we see the toll this pandemic has taken, yet the economic hardship that has accompanied it is nothing new for many in the places we serve. Rooted in communities across the country, community foundations are important institutions in the local civic infrastructure, connecting people, ideas, and resources to create better outcomes for all. In addition to channeling philanthropic dollars to address community needs, we play a needed leadership role in our communities.

Each of our foundations has put closing racial and ethnic wealth divides at the center of our efforts to achieve these goals. However, our efforts alone cannot come close to lifting individuals and families out of poverty in the way these expanded tax credits have.

Since July, more than four million children have been lifted above the poverty line – an almost 50 percent reduction in poverty — because of the American Rescue Plan —and specifically because the Child Tax Credit was made fully refundable for families who make too little to owe income taxes.

The EITC expansions have reached 17 million more working adults by making workers age 19-24 and over 65 newly eligible for the credit and by boosting the value of the credit for workers without children in the home.

These landmark policy reforms have significantly improved the economic prospects for individuals and families with children in the communities we serve and have delivered them in a way that can relieve stress on families and expand economic opportunity. The EITC has a long and proven track record of boosting employment, and a recent study of a similar child tax credit expansion in Canada found that it had the effect of increasing employment for mothers.

The extensions and enhancements to the CTC and EITC included in the bill passed by the House Ways and Means Committee are sound investments that can provide the kinds of supports low- and moderate-income families need to build long-term economic security. Data has shown that families mostly spent their recent CTC payments on basic needs, including food, utilities, clothing, and school supplies, as well as paying down debt and boosting savings.

These tax credits are sound economic policy that recognizes that caring for children is work, and that anyone who works full time, should not live in poverty.

As we weigh the investments in the Build Back Better budget, let’s make sure that the investments included have the greatest return for those who need it most. We urge Congress to take this significant step forward in what we and civic leaders in our communities have worked towards for generations: significantly reduce poverty, level the playing field, and grow our local economies by making the EITC and CTC expansions permanent.

Flozell Daniels
CEO and President of the Foundation for Louisiana

Helene Gayle
President and CEO of The Chicago Community Trust

Ellen Katz
President and CEO of the Greater Cincinnati Foundation

Steve Seleznow
President and CEO Of the Arizona Community Foundation