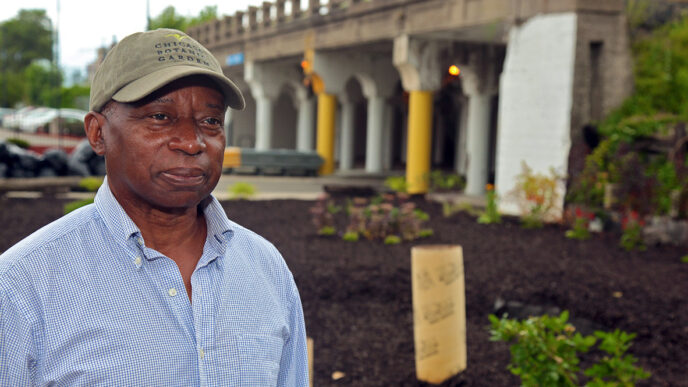 One year ago, William Hill had a vision: Create a colorful botanical garden in Woodlawn where visitors could learn about plant life, biodiversity and green living.

His vision has now become reality in a vacant lot across the street from Hill’s home. Bit by bit, the lot at 64th Street and Dorchester Avenue has been cleared of debris and weeds and transformed into a “living museum”—a garden boasting a carefully selected array of plants that will thrive through the four seasons.

Since the project was launched in early summer, the site has emerged as a green oasis in the community. Drivers, bikers and passers-by slow down to take a look, waving to Hill and thanking him for his efforts. In a community with too many vacant lots, even one reclaimed is worth celebrating.

“I wanted to beautify and bring awareness and tie together the threads of nature and of social and environmental justice,” said Hill, an artist and avid gardener. A soft-spoken man, his demeanor comes alive as he ticks off the names of the plants: golden-red marigolds, yellowish-pink Mexican daisies, orange canna lilies, juniper and serpentine evergreens.

“Two-thirds of our species of plants are on the endangered list,” said Hill, who studied biology and botany in college. “That concerns me. So any way we can bring about sustainability by conserving life—whether plant, animal or human life—is very important to me.”

As the project took shape, volunteers and support began to emerge: from Metra (whose tracks run along the east side of the site), the University of Chicago, the city, local businesses and grassroots organizations. A friend of Hill’s who is a carpenter built a trellis that will be hung with evergreens. Passers-by who stop to admire the garden have ended up volunteering to help with the work.

Another friend, artist Peter N. Gray, created a wood-and-metal sculpture that was recently installed. Called Signs of Spring, it depicts a bird’s nest sitting in a tree trunk, with a large golf ball and blue bird’s egg inside. “Golf balls and birds eggs are the two things people want to see in the spring,” Gray said with a laugh.

“I first came when it was just an empty lot and talked with Bill a long time about what was going to be here and where we might put some sculptures,” Gray said. “It’s fantastic. It’s such an addition to the neighborhood.”

Artist Peter Gray installs Signs of Spring, a sculpture inspired by a bird’s nest. “I first came when it was just an empty lot,” Gray remembers of the now-thriving garden.

Gray is a member of Chicago Sculpture International, which each year erects some 20 or 30 public sculptures in other parts of the city. “But most of those have been in the Lakeview, Lincoln Park area, some along Lake Shore Drive,” Gray said. “So this is really a great effort to move sculpture further [south] and to have local artists that live in the area to exhibit their art in public.”

Over the next two years, Hill plans to extend the garden another full block to 65th Street and Dorchester Avenue. Hill hopes to provide a curriculum on gardening and botany to elementary schools in the area and has recently finished his masters degree in education at DePaul University.

Metra tracks run along the garden’s eastern edge. The rail company is among many forces that have joined in support of Hill’s vision—from the City and the University of Chicago, to neighbors who chance across the garden as they walk or cycle by.

Eventually, Hill hopes the botanical garden concept will take hold elsewhere, especially on the south and west sides of the city that are dotted with thousands of vacant, debris-strewn lots.

“Ideas spread like a virus,” said Hill. “I think designating this space as a flagship, people throughout South Shore, Woodlawn, Washington Park, will just jump on board. [It will] take a sense of community, just moving ahead to say OK, this is a project we can handle [to] advance toward beautification and neighborhood development.”