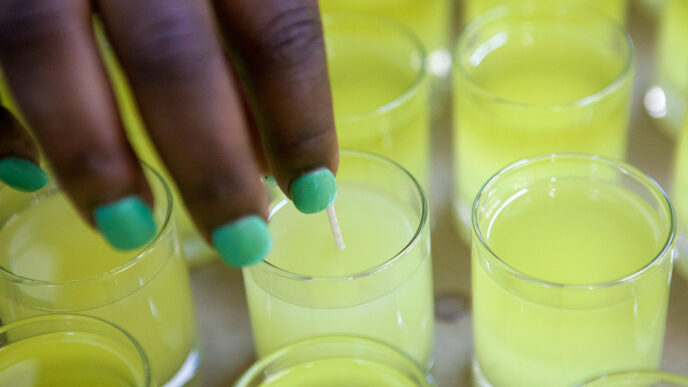 Lighting the Way Out of Poverty for Young Moms

Helping a poor young mother get a start on a better life can actually lift two generations of a family out of poverty. Because if a mother prospers, her children likely will, too.

That’s the bright idea behind Bright Endeavors, a social enterprise that uses candle-making to boost young moms toward financial independence.

Bright Endeavors, which revolves around the manufacture and distribution of stylish soy candles, is an initiative of New Moms Inc., which has been working on behalf of young Chicago mothers for 30 years.

Founded in 2007 by Joan Pikas and Stephanie Wernet, Bright Endeavors was originally an independent enterprise—but in an inspired bit of synergy, it merged with New Moms Inc. in 2010.

Four to eight women, up to age 24, go through Bright Endeavors at any given time. They receive five weeks of classroom training at the New Moms’ facility at 5317 W. Chicago, then move to Bright Endeavors’ quarters in an industrial building in West Garfield Park for eight weeks of paid, hands-on training in making premium candles, inventory and marketing, plus “soft skills” like punctuality, conflict management and teamwork.

Jenna Hania, development and communications manager for New Moms Inc., says, “Bright Endeavors is a cottage industry, making simple candles, but our young moms get to have an experience of learning how to work with the grace of a program that requires change but also allows for mistakes.”

At the Bright Endeavors production facility in West Garfield Park, a cohort of young mothers gains hands-on technical and workplace skills in hopes of finding jobs that will lift their families out of poverty.

Bright Endeavors sells to upscale retail stores in the Chicago area, as well as through catalogs and its website. There’s also a candle-rental sideline that’s especially popular with caterers and wedding venues. Bright Endeavors is on its way to being financially self-sustaining, says John Guido, manager of business development.

In conjunction with New Moms Inc., which was founded in 1983 by Ellen Kogstad Thompson, Bright Endeavors offers parenting, literacy and job training—plus a window to a larger world than its participants may have seen before in their young lives.

Of the approximately 70 young women who go through Bright Endeavors annually, about half are placed in jobs straight out of the program, Guido says. Participants who don’t find a job right away continue with a staffed job club while they continue to search.

One recent day, the current Bright Endeavors crew broke for lunch and shared their experience with the program. Angela*, 22, the mother of a four-month-old boy, says she needed “a little push” to get started on her future. She appreciates the instruction she received on how to act in a professional manner, and the chance to reflect on “the example you set as a mother.”

Angela says she would like to be a lawyer, and she has learned in her recent training how she might able to attain that goal by first becoming a paralegal.

Lynn, 21, who has a four-year-old daughter, would like to run a fashion and design company one day. She came to Bright Endeavors because she “wanted to make a difference in [her] life.” Already, Lynn says, she has gained more confidence.

And Debbie, 19, who has a toddler, says the program has given her “a lot of support… which is something I didn’t have.” She would like to go into social work with elderly people.

Hania says, “Young women often don’t see their value. They don’t see the opportunities they might have, the futures they can forge, or even that they have the ability to say yes or no.”

But the hope the program offers its graduates can turn that around.

“One of the most powerful parts of our program is that we are affecting two generations,” Hania says. “It’s not just the mother whose life will change. In creating a new environment for a woman’s family, we are also helping to shift the trajectory for her child.”

*All Bright Endeavors participants’ names have been changed to respect their privacy.