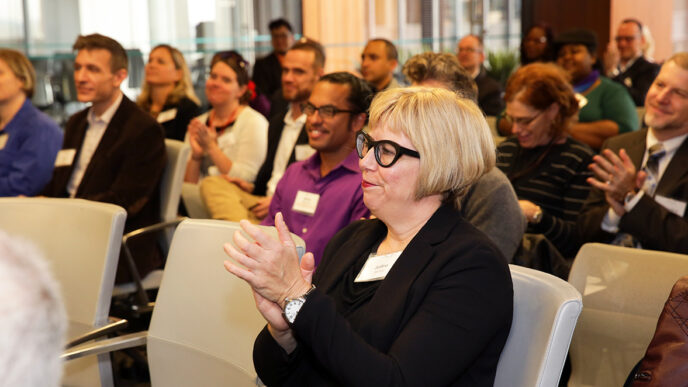 The Chicago Community Trust’s LGBT Community Fund kicked off its first round of community grant making at a reception on October 1. The Fund—founded in 2010 through an operating grant from The Elizabeth Morse Charitable Trust and a special grant from The Chicago Community Trust—began a “deliberate, passionate effort to address the LGBT needs in our region, culminating here today,” in the words of Trust CEO and president Terry Mazany.

The LGBT Community Fund has its roots in the work of Prue Beidler, the former chair of the Trust’s executive committee. While serving on the Trust’s board, Beidler worked with Mazany and the Trust’s staff to establish and formalize policies that celebrate and encourage diversity.

The legacy of that work, Mazany says, has been “the strongest policy on diversity and inclusion that any philanthropic institution has.”

Despite Beidler’s early interest in cultivating a philanthropic connection between the Trust and the LGBT community, the Fund took several years and the investment of The Elizabeth Morse Charitable Trust to incubate. “In 2010 this showed up from completely off my radar when Terry called and asked me to speak at the kick-off,” she recalled.

The October reception celebrated the first of three rounds of grant making planned over the next year. Fourteen grants, totaling $282,500, were distributed to organizations serving Chicago’s lesbian, gay, bisexual and trans community, with a special focus on projects that serve LGBT youth and seniors. The grant recipients provide services in fields ranging from healthcare, housing, legal services and job training to the performing arts and cultural archives.

Erik Glenn, executive director for Chicago Gay Black Men’s Caucus, echoed that mission in his closing speech when he described the impact of the funding. “It’s about about unlocking the potential that the Caucus has been waiting to unlock, and we’re not alone in that.” The Chicago Gay Black Men’s Caucus will use their grant for salary support and capacity building that strengthens the organization.

Other grant recipients include:

The diversity of recipients reflects the Fund’s “mission to promote collaborative efforts between LGBT and non-LGBT organizations,” said the Trust’s director of donor services Bob Eichinger.

James Alexander of the LGBT Community Fund steering committee presents a grant check to Erik Glenn of the Chicago Black Gay Men’s Caucus. The funding will support staff salaries and provide capacity building to strengthen and grow the organization.

“We meet so many people through the work that we do who really deserve for us to be as good as we can be, and to take the lessons we’ve learned and make good on them,” said Erik Glenn. “There really is the sense that we’re all in this together, and these grants enable us to take a step back and ask how we can do this better.”

In order to continue grant making, the Fund has engaged in a fundraising campaign led by its steering committee. At the reception, co-chair Ryan VanMeter announced that the Fund had surpassed its fundraising goal of $975,000 in September by over $3,000, qualifying for a challenge grant from the Morse Foundation for an additional $25,000.

This success means that more than $1 million will be added to the Fund’s endowment, providing support to help address the emerging needs of the region’s LGBT community for years to come.