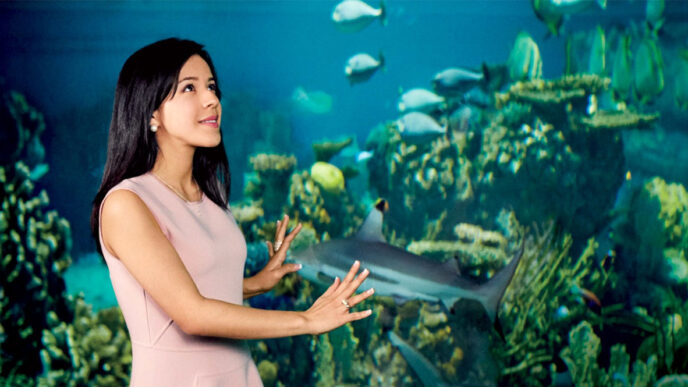 Leading the Next Generation of Ocean Preservation

Before she’d ever heard of Chicago or Lake Michigan, Daniela Fernandez spent happy times at the beach in Ecuador.

Those times lasted until she was 7, when she and her mother Martha came to Chicago, seeking better lives for themselves.

At 22, Fernandez knows a lot more about the world’s vast bodies of water than she did as a child playing along the Pacific Ocean. The ocean she remembers as child no longer exists, she says, because the waters are too polluted.

Now a Georgetown University junior majoring in economics and government, Fernandez is a tireless environmental activist, devoted to educating young people about the ocean’s dire state and persuading world leaders to make ocean sustainability a priority.

Her mission began in 2014 after attending an environmental meeting at the United Nations. She sat next to delegates from around the world learning about marine pollution, dying coral reefs and rising water temperatures that are putting land and water in peril.

“At that meeting, I didn’t know the role the ocean had in the environment as I do now,” she says.

Something else struck Fernandez at that meeting: She was the youngest person in the room.

“There was a huge gap of information that wasn’t reaching millennials about the importance of the ocean.”

On the train ride back to Georgetown, she thought about organizing an event to educate millennials about the importance of the ocean. That train ride would lead to the Georgetown Sustainable Oceans Alliance (SOA), Fernandez’ student-led organization that rallies young people to take a lead in preserving the health and sustainability of the oceans.

Daniela Fernandez backstage at WE Day Illinois, a celebration of youth activism and philanthropy where she was a featured speaker. Go behind the scenes at WE Day

Fernandez, who serves president of SOA, says “I started my own organization as opposed to joining one because I didn’t find an organization that was effective on and off campus. The organizations were very campus-community-focused, and I wanted an impact outside the gates as well.”

Since founding the Alliance, Fernandez organized a summit that included Sylvia Earle, explorer-in-residence at the National Geographic Society.

She authored a guest editorial, “Millennials will answer the call of the ocean,” for The Economist magazine and helped collect 9,000 signatures to make ocean preservation a U.N. Sustainable Development Goal, which was accepted at last year’s General Assembly.

“When some politicians won’t say ‘climate change,’ we need to take a stand,” Fernandez told Glamour magazine, which named her one of its 2016 College Women of the Year.

She earned straight As, graduated at the top of her class. But with her immigration status in limbo, Fernandez felt her dreams falling apart.

Fernandez has excelled as a leader for the Georgetown community—but she almost didn’t get there. She was an undocumented immigrant, making her ineligible for most federal financial aid and many loans.

“I couldn’t get into college without financial aid or any loans,” says Fernandez. Raised in a single-parent household, she often tagged along to her mother’s multiple jobs, from delivering papers and flowers, to working in restaurants.

“Mom always told me to work for a better life,” Fernandez says.

At Chicago’s Lincoln Park High School, she earned straight As, belonged to the Junior State of America debate club and had plenty of Advanced Placement classes to her credit. She graduated at the top of her class.

Her mother had filed for their permanent U.S. residency, but they had no idea how long it would take to be approved. With her immigration status in limbo, Fernandez felt her dreams falling apart.

During her junior year at Lincoln Park, she became involved with Chicago Scholars, an organization that trains and mentors academically ambitious students from under-resourced communities to complete college. Fernandez turned to Chicago Scholars president Karen Foley for advice.

“She told me everything would be OK and that I could intern [for Chicago Scholars] until I figured out my immigration situation,” Fernandez recalls. Chicago Scholars paired Fernandez with career mentors and hired her to work at its office.

“Chicago Scholars was a huge part of my life and the reason why I ended up at Georgetown,” says Fernandez, who first learned about the prestigious university from Chicago Scholars founder Timothy Schwertfeger, a Georgetown Law Center grad.

Fernandez took a year off after high school, then attended Elmhurst College, one of the first colleges to offer aid to undocumented students. She worked full time at Chicago Scholars during the day and went to class in the evenings.

Along her own immigration journey, she met other families in similar circumstances. “There were so many people who weren’t getting the proper help or info. This wasn’t just me. It was a large part of the Hispanic community.”

Finally, in January 2013, Fernandez and her mother obtained permanent U.S. residency status, putting them one step closer to full citizenship. Fernandez was 19.

“It was the happiest day of my life,” she remembers. “The world had opened its doors to me, and I could do everything I ever wanted.”

Fernandez will spend the summer interning at a private equity firm in New York City. Eventually, she plans to attend business school and start her own impact investing firm.

“And perhaps later, run for office.”