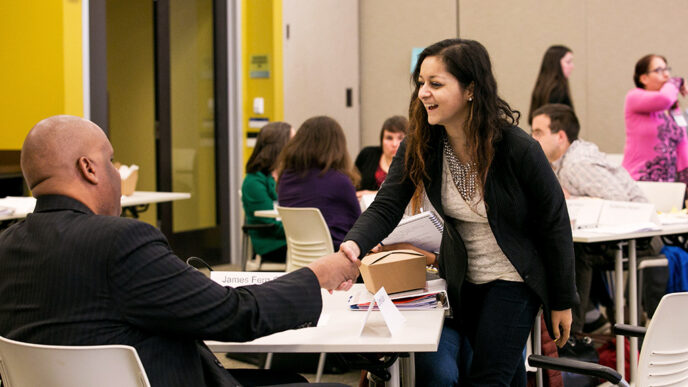 Grishma Shah greets another member of ADA 25 Advancing Leadership at the 2019 Leadership Institute.

Leadership: The Power is Within Us

Grishma Shah is a mass media consultant, artist and co-director of the Chicago ReelAbilities Film Festival. This year her exhibit, The South Asian Perspective, has been displayed at Adler University’s downtown Chicago campus and at the Harold Washington Library. In October, the exhibit traveled to Naperville in collaboration with Ekjut Theater for its play Yoni Ki Baat, a South Asian adaptation of The Vagina Monologues.

Shah was named a 2018 Fellow for ADA 25 Advancing Leadership: a first-of-its-kind program for emerging leaders with disabilities. She was recently accepted to National Louis University for their Doctorate of Philosophy in Community Psychology program. As an artist who uses storytelling to champion inclusion and challenge biases in our global community, Grishma Shah exemplifies the Leadership Institute’s vision of people with disabilities leading with power and influence.

As a Mixed-Media Artist, I believe in the power of art to tell stories, to create a universal space for something beautiful that can challenge people’s perceptions.

From the age of 16, I had a story to share. I became a young person diagnosed with a tumor, who would acquire a physical disability. As the years went by, the story became much more than just about me—it became about the way society perceived women with disabilities.

Last year, I was inspired to create a mixed-media exhibition, The South Asian Perspective, from my lived experiences grappling with biases, both conscious and unconscious, as a woman of color and as a woman with a disability. The objective of this exhibit is to increase inclusiveness in our society at large, and specifically within the South Asian community. As a South Asian woman who has been immersed in the community since birth, I am aware of the cultural and social factors that come with being South Asian, whether in South Asia or abroad. Through storytelling and art, I hope to challenge the way “we,” as a collective global society, perceive individuals with disabilities, especially women.

I am fascinated with mixed-media because it has the capacity to be felt. It is accessible not only through sight, but also through touch. Art can, and should, be used to explore opportunities in the disability space. My master’s degree in public health with a focus on media and art shows my commitment to this belief. Art is universal, like love—and through shared universal experiences, we begin to recognize our similarities rather than our differences.

Image description: Members of the Leadership Institute seated around shared tables in conversation, with Grishma Shah pictured at center

The 25th anniversary celebration of the Americans with Disabilities Act in Chicago in 2015 created pivotal opportunities for me to continue growing as a leader while championing inclusion through art and storytelling. As part of the anniversary celebrations, I was selected for the role of co-director of Chicago ReelAbilities Film Festival, whose mission is to humanize the experience of disability.

Art can, and should, be used to explore opportunities in the disability space. Art is universal, like love—and through shared universal experiences, we begin to recognize our similarities rather than our differences.

I am a 2018 ADA 25 Advancing Leadership Fellow. The Leadership Institute was created for emerging leaders with disabilities who envision themselves in leadership roles in professional and civic spaces. Fellows build connections with one another, strengthen their skills and build the confidence needed to take their leadership skills to new heights. Advancing Leadership connected me to Fellow Evelyn Keolian. Through this beautiful connection, Evelyn and I were able to collaborate and bring The South Asian Perspective exhibit to the Harold Washington Library in downtown Chicago.

What have my experiences taught me about power, influence and leadership? Individuals share a deep relationship with their community. Each one of us is a collective of our experiences, and those experiences are profoundly impacted by society and culture. Society can be the building block for success or present barriers which hinder our ability to grow and flourish. Who decides which individual will flourish and which will fail? Often, we feel it is destiny. Individuals are the creators of society, and society determines our destinies. The simple fact is, individuals are the changemakers, we have always been the changemakers.

As an Artist, storyteller and leader, I can plant a seed in the mind of individuals—that a woman of color with a disability can be a powerful and influential person.