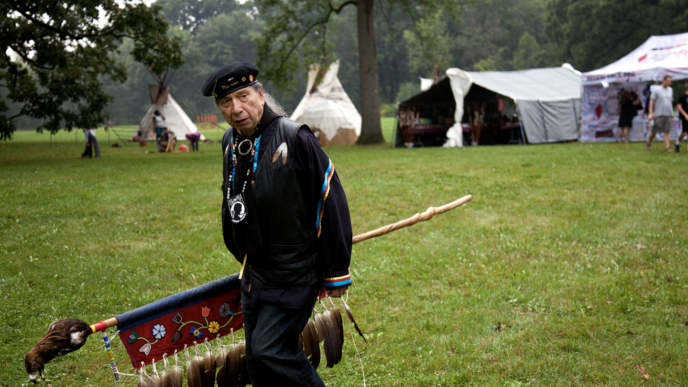 A participant of the first National Gathering of Native American Veterans, held August 29, 2015.

Our Journey to Acknowledge the Ancestral Homeland of Our New Office

As part of our move to our new office at 33 South State Street, The Chicago Community Trust worked with Starla Thompson, an Indigenous scholar, educator, and activist, to develop a statement acknowledging Indigenous people’s original stewardship of the land.

Starla is an enrolled member of the Forest Band of Potawatomi and works as a historical and cultural consultant for a variety of organizations. She currently works as a curator at the Burpee Museum of Natural History and as a research fellow at the University of Chicago. During the process of working with her, we learned that though often well intentioned, land acknowledgements can too often feel transactional and insufficient to members of the Indigenous community.

In a conversation with Lorca Jolene, archivist at the Trust, Starla shared how organizations can make land acknowledgements more meaningful and authentic. Organizations can be reflective and intentional about how land acknowledgements align with their mission, values, and everyday work. And they can incorporate Indigenous voices to lay the groundwork for taking action and building relationships with Indigenous people.

Lorca Jolene (LJ): Many people aren’t aware that a Potawatomi woman, Kitihawa Point Du Sable, established the first permanent settlement that would become Chicago, along with her husband Jean Baptiste Point Du Sable. Could you speak on Indigenous people’s role in the city’s history?

Starla Thompson (ST): I try to push back on anyone who is surprised by that because I think we’ve come far enough along that we’re not surprised. What we should be surprised and frustrated with, or angered by, is the continuation of colonization. Kitihawa was the wife and partner to John Baptiste DuSable, who was a Haitian man and who is acknowledged as the first non-Indigenous settler, when our country became a settler state.

LJ: What elements does a land acknowledgement include?

ST: As a Potawatomi woman, as an Indigenous woman, as a mother, as an educator, as an ethno-historian, land acknowledgements are tough. I think that the number one thing with land acknowledgements is the intent. Organizations need to start with themselves and really be honest about why they want to do this. And, as I’ve put to the Trust: how does this align with what you’ve always done? The Trust has over a hundred-year history in Chicago. How does this align with what you do every day, your mission, vision, values?

LJ: Why is it important that land acknowledgments be written, in some capacity, by someone who is a member of one of the tribes that originally lived on the land?

ST: To identify and empower the people that have those ancestral ties one, is meaningful, but two, it is authentic. Our origin stories are from the region, from Illinois, from Wisconsin, from Michigan, that call Great Lakes home. Which means that our origin stories, back from time immemorial, have a history, an origin telling us how we were in relationship with land. We have a connection to our whole being, our identity, our clanship. The way in which we organize and identify as a people is based on a very sophisticated clan network. It’s important to do justice to that and authentically represent that. And that can only be done by someone from that land.

LJ: What are some of the creative ways you have seen other organizations honor Indigenous people and communities?

ST: I’ve seen different organizations do things like an honor tax or land tax*, where they’re acknowledging Indigenous sovereignty and paying a land tax. There are people who are doing land back in different forms. I think that’s very authentic. Again, it has to be aligned with mission, vision, values, and how and what they do every day so that it’s authentic. But also, looking at the need within the community where they live.

LJ: What are ways that members of the community can acknowledge and show respect for Indigenous people’s original stewardship of the land?

ST: Within our histories, stories, traditions, and Indigenous way of living, we always receive instructions in relationship with the land. We’ve come so far in imperialism, colonialism, industrialism, and we’re coming to a tipping point where this isn’t working for human beings. We all need water to drink. We all need air to breathe. I really love that people are returning to Indigenous wisdom and knowledge because we were provided those instructions on how to be in relationship with the land, how to care for the land. There are so many efforts around the nation but even in the Great Lakes area that are working to protect our waterways or Indigenous sovereignty. It starts with being in a relationship with Indigenous people and communities, however individuals are comfortable doing that.