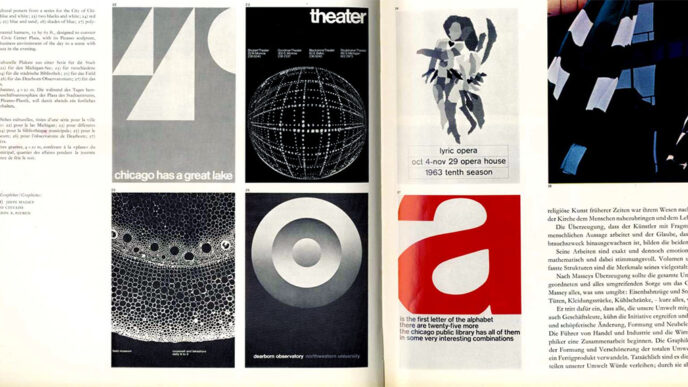 “Be classical or extraordinary; nothing else is acceptable.” – John Massey

This August, downtown Chicago will brighten with rows of banners emblazoned with the colorful art of celebrated local designer John Massey.

Shortly after creating the banners for the original installation in 1968, Massey began working with The Chicago Community Trust—creating iconic designs that would represent the Trust for decades to come.

The Trust’s annual report for 1985 was designed by John Massey, the celebrated local artist and typographer whose work is celebrated this August with a display of banners along State Street in the Loop.

Massey was a pioneer in incorporating modernist style into American design and advertising. From 1964-1983 he was director of design and corporate communications at Container Corporation of America, an internationally influential studio based in Chicago. During that time he worked on several innovative landmark civic projects.

A pioneer of the modernist art style in American advertising, Massey’s work for Chicago institutions—libraries, museums, zoos, as well as the Trust—helped elevate their civic profile as treasured cultural assets.

In 1973, the Trust hired Massey to reimagine our brand and design a number of promotional materials. Massey created the logo that the Trust would use for the next thirty years. He also created covers inspired by that logo design for a number of the Trust’s annual reports.

Massey designed the layout of the Trust’s newsletter that was published from 1973 to 1982. Later the Trust launched The Trust Quarterly, for which Massey served as a design consultant.

Massey designed the layout of the Trust’s print newsletter, launched in 1973, and consulted on the design when that publication evolved into the Trust Quarterly in the ’80s.

Massey’s work and philosophy inspired organizations to appreciate and think creatively about using art and design to stand out, communicate their values and engage the public. His colleagues often remarked on his talent for attuning to and assessing a company’s culture and needs, then reflecting them in the evocative colors and orderly forms of his designs.

Designed by Massey, this annual report cover from 1976 drew inspiration from the logo he created three years earlier—a logo that would define the Trust’s brand for 30 years.

He believed in the limitless possibilities of even the most elementary systems and patterns, whether one is creating art or running as far-reaching an organization as the Trust. Massey was a pioneer in imagining the potential of branding as an instrument to increase civic pride and engagement, and the Trust is proud to have worked with him to create some of the most evocative brand materials in our history.