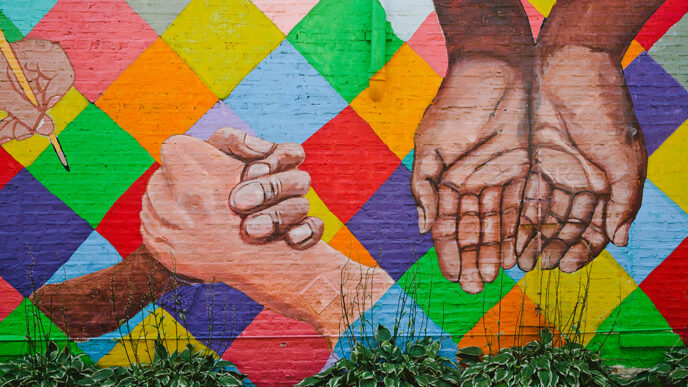 When the Trust held its first On the Table, we heard loud and clear from the community that race and segregation is the biggest issue we face.

What if I lived in a neighborhood where 80% of the adults I knew didn’t have a job? Where getting through school was a matter of chance–a 50/50 proposition at best–and where getting to school could be life-threatening? Would I still be striving for my share of the American Dream?

Would I even think the American Dream was meant for someone like me?

Against all odds, against any standard of reasonableness, our fellow residents who call Englewood, or Austin or North Lawndale home, do just that.

But for those of us who don’t live in those neighborhoods, there is a corrosive narrative that the crisis in our neighborhoods is the result of poverty, and poverty is the result of bad choices: choosing to drop out of school, choosing to get pregnant while in high school, choosing drugs and gangs over hard work. This allows us to be comfortable with the disparities we see every night on the evening news.

If we were to look any deeper, we would have to confront our unreconciled heritage of racism and white supremacy.

There is a corrosive narrative that the crisis in our neighborhoods is the result of poverty, and poverty is the result of bad choices. This allows us to be comfortable with the disparities we see every night on the evening news.

The responsibility to talk about racism in our city must be shared by white people. We must be brave and vocal about racism and white privilege, otherwise the status quo prevails.

The reality is, we continue to live in one of the most segregated cities in our country with a deep legacy of racism.

A few months ago, the Trust and the Chicago Public Library hosted Jim Wallis, pastor and founder of Sojourners, to talk about his powerful new book America’s Original Sin: Racism, White Privilege and the Bridge to a New America. Though the lenses of historical events and current tragedies, Wallis asserts an incisive and coherent theological framework for racism as our original sin–and a path forward through acts of repentance and action.

The title of his book traces the roots of racism in our country to its founding, when we sought to resolve the dissonance between scriptures that state all men are created in God’s image, and an economy based on slave labor.

The result is the compromise embedded in our U.S. Constitution, which calculates population for determining seats in the U. S. House of Representatives based on 3/5 of “other persons,” and excludes Native Americans altogether. With this formulation, the idea of white supremacy is baked into our national DNA–reinforced originally through law, and today through the culture of white privilege.

Terry Mazany delivers his address to the City Club of Chicago.

Let me propose a different way to think about white privilege. There is a famous commencement speech delivered in 2005 at Kenyon College by David Foster Wallace. He began with a story: Two young fish meet an older fish, who asks them, “How’s the water?” The younger fish look at each other and say, “What the hell is water?”

As Wallace explains, “The point of the fish story is merely that the most obvious, important realities are often the ones that are hardest to see and talk about.” This is what institutional and structural racism is in our society: It is water. For white people it is invisible to us, because it is our water. Yet, in our state and our city:

The forced release of the Laquan MacDonald video by Jamie Kalven has been catalytic for social transformation, and I applaud the important role media has played in these events. As Bill Moyers once said, “The quality of democracy and the quality of journalism are deeply entwined.”

As a result of this coverage, the Police Accountability Task Force was convened. To make sure that the recommendations of its report are not lost, I want to draw your attention to the work of Smart Chicago and the City Bureau, who posted a fully annotated and documented listing of all 200 of the recommendations from the report.

To quote the report: “If you are not severely and wholeheartedly dealing with racism, you are not going to get to the bottom of this issue.”

In response, Fraternal Order of Police president Dean Angelo stated in a recent Sun-Times article that “if you look at crimes and murders, gun, narcotics and homicide arrests ward by ward, the top 10 wards in the city are over 80% African American. That’s where the officers are assigned, and that’s where more contact occurs. Officers aren’t responding to neighborhoods of color. They’re responding to neighborhoods of crime.”

There it is. This is exactly what Reverend Jim Wallis discusses: the dehumanization and criminalization of African Americans.

All of us must be on the same side, confronting racism—not negotiating across the table, with black lives in the balance.

Now, here is our dilemma. Angelo’s statement is very hurtful to African Americans, especially those living in the neighborhoods he singles out. And our predictable human response would be to lash out, fight back–especially if you have endured generations of sanctioned oppression.

Our challenge is to acknowledge the pain, and also to move to reconciliation. For us to make progress in reducing racism in our city, Dean Angelo and the FOP must be at the table. All of us must be on the same side, confronting racism—not negotiating across the table, with black lives in the balance.

Unfortunately, we see the pattern of structural racism in the concentrated segregation of Chicago’s schools. But we also see glimmers of hope.

Chicago is a great city with a bright future.

That is our vision of hope to sustain us all, to become comfortable discussing and confronting racism, to seek reconciliation, and to work toward a more inclusive future.

Excerpted from Terry Mazany’s address to the City Club of Chicago on April 27, speaking about the state of the nonprofit sector, education and racial inequity in our community. You can watch the video of his complete remarks on the City Club website.