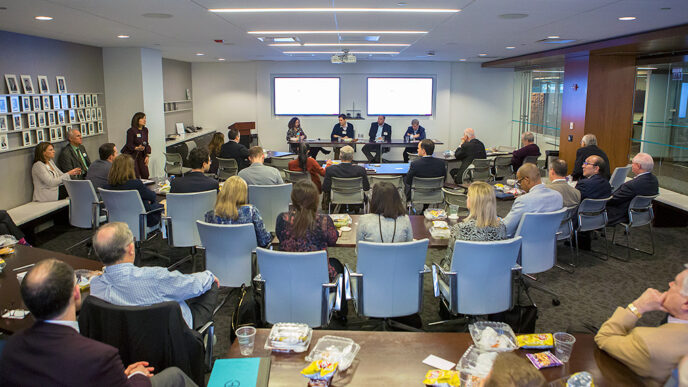 Opportunity Zones have been in the news and packing standing-room-only public hearings since the IRS and Treasury Department released the first set of proposed regulations in October.

But how can Chicago-area investors make the most of these tax incentives, in a way that deeply benefits communities suffering from decades of disinvestment?

Over lunch, a panel of experts briefed the committee members and answered their detailed questions about how their clients could maximize their tax benefits by investing in the local Opportunity Zone landscape.

Richard A. Lang, a partner at McDermott Will & Emery who chairs the Professional Advisory Committee, introduced the event as a chance to learn “not just where the Opportunity Zones are in Cook County, but also the critical role of philanthropy, and how the Trust is going to participate in making sure that this is a win not only for the investors but for the community at large.”

An Opportunity Zone is a community lacking access to capital, where new investments may be eligible for preferential tax treatment. The incentive was created as part of the Tax Cuts & Jobs Act passed in December 2017.

There are more than 8,000 Opportunity Zones across the U.S., selected from among each state’s lower-income census tracts. Of Cook County’s 181 Opportunity Zones, 135 are in Chicago, mostly on the south and west sides. See the map

How they benefit investors:

What they mean for communities:

According to a report from Urban Institute, “Opportunity Zones that are already heavily invested in may be seen as comparatively lower risk and thus attract further investment. Depending on local conditions, this could increase gentrification and displace community members… Census tracts currently struggling to access capital may still find it difficult to compete for new Opportunity Zone capital.” Read the report

Mohammed Elahi, deputy director of economic development for the Cook County Department of Planning & Development, provided insight into how the county selected the census tracts to recommend for selection as Opportunity Zones. “The law allowed only 25% of all qualified census tracts to be designated as Opportunity Zone tracts. So we had to take a very hard look at how we’re going to request ours.”

“Cook County is close to the U.S. unemployment rate. However, south suburban Cook County towns are experiencing, if not double, very close to double the national rate of unemployment. And the poverty rate: the qualifying criteria is 20%, and some of the towns’ poverty rate is as high as 50%,” Elahi said. “We worked with local entities—like a council of government called South Suburban Mayors and Managers Association—very closely to analyze what we should propose.”

Trust program officer Joanna Trotter moderated a panel discussion about how investors can achieve the full tax benefits of the Opportunity Zone incentive, introduced under the 2017 Tax Cuts & Jobs Act, in ways that complement existing investment in those neighborhoods rather than displacing people, businesses and other community assets.

Dan Klaff, an attorney at Applegate & Thorne-Thomsen, P.C, described how Opportunity Zones are “different from some of the other tax credit incentives that I work with and others do.”

“This was really a tool intended to incentivize economic growth in low-income communities by bringing capital off of the sidelines—diverting capital from other uses into these particular communities,” Klaff summarized, before speaking in technical detail to the tax incentives associated with real estate investment through a Qualified Opportunity Fund, and fielding questions about how it compares to a 1031 exchange that investors might have previously used to defer capital gains taxes.

Dan Klaff, an attorney at Applegate & Thorne-Thomsen, spoke in detail about investing in Qualified Opportunity Funds and answered questions from the audience of lawyers, financial advisors, investment managers, accountants and other professionals from leading Chicago financial institutions.

“Right now we’re focused on real estate, but I think the next phase of Opportunity Zones are going to be operating businesses,” said Matt Reilein, partner and managing director at Cresset Partners leading the firm’s Qualified Opportunity Zone initiative. “That’s everything from manufacturing companies, retail companies and distribution facilities to, potentially, technology companies.

“The operative businesses, that’s really what’s going to drive job creation and wealth creation in these communities. There is a finite number of real estate development opportunities. But there’s almost an infinite number of operating businesses that can be inserted into that space,” Reilein said.

Dan Klaff connected that opportunity back to the needs of community residents, in addition to investors. “Even with operating businesses, how do we make sure that they are job-focused, and make sure that they have local components like hiring folks that are local—that the wealth creation and generation stays in those communities?”

For professional advisors, being part of the Trust’s advisory committees provides “deep insights into ‘boots on the ground’ work that they otherwise might never learn about,” said Abbe I. Temkin, senior philanthropic advisor. While their clients may already be thinking about Opportunity Zones as an investment opportunity, advisors are now equipped to provide more detailed answers—both about the specifics of tax deferral, and the implications for community vitality.

Joanna Trotter, a senior program officer at the Trust working in economic and community development, echoed that focus on the human impact of investment. “We should always keep issues of displacement front and center whenever we’re working in community. Some of our colleagues in other cities picked zones that were already experiencing investment, and are now probably going to have to grapple with issues of displacement or gentrification.”

“Our city and our county did the right thing by selecting zones that were a bit harder to invest in, those that were not experiencing as much investment already,” Trotter said. “We have a little more work to do, but I think we also have the opportunity to do it right.”