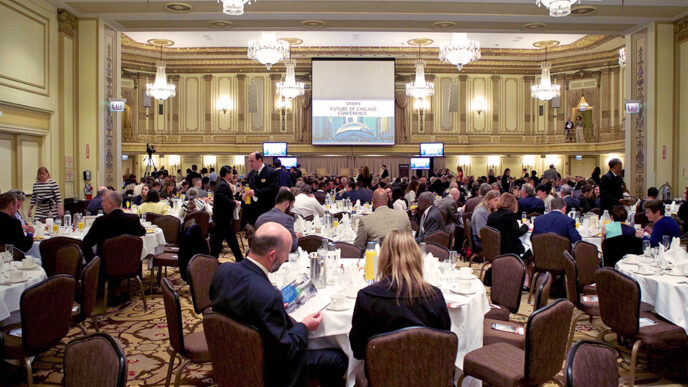 Instability, Energy and Progress: The Future of Chicago Schools

“Chicago is at a tipping point—and the world spotlight is directed squarely us.”

The tagline of the Future of Chicago conference on June 15, hosted by Crain’s Chicago Business, reflected the sense of urgency that animated a series of panel discussions on the region’s economic development, the current fiscal crisis and the state of criminal justice.

But first, the day opened on a topic that would echo throughout the day’s conversations: the state of education.

Moderator Linda Lenz, an education journalist and founder of Catalyst Chicago, presided over a group of education professionals and thought leaders that included:

To begin, Lenz invited each speaker to identify the biggest challenges facing our schools.

Elaine Allensworth of the University of Chicago Consortium on School Research cited the churn in leadership, with shifting policies and priorities accompanying each change. The risks of such instability, she explained, include burnout and disengagement among educators—who are constantly charged to set aside priorities and refocus on the next big initiative—as well as reinforcing a perception that Chicago schools are in a state of constant chaos.

In fact, Allensworth said, “Our schools really have shown great progress in the last 10 years.”

“There is tremendous talent and energy in this city,” Deasy said. “I hope that we don’t lose it.”

Beatriz Ponce de Leon of Generation All presaged several of the day’s later panels by listing the budget impasse as a concern. “We don’t have a budget for education. And money matters.”

Lenz’ next question spoke to Chicago’s ongoing conversations about school choice: How do we end the charter vs. public school debate?

During his tenure in Los Angeles, Deasy explained, there wasn’t a sense of fundamental conflict between the two school types—because the district cultivated “willful and deliberate sharing of ideas.” High-performing public schools, with their deep history in the communities, and charter schools, with their unique mission and energy, “had a lot to learn from one another.”

Stress was only introduced into the relationship, Deasy says, by a change in the budget formula that changed how each school received funding, and therefore created competition.

In contrast, Ponce de Leon said, Chicago’s charter schools have been opened without analysis of the existing school assets and neighborhood populations, to choose locations where they are most needed.

Ponce de Leon described the situation not as a binary between charter and public, but as an “education ecosystem” which contains a balance of neighborhood, selective-enrollment, charter and Catholic schools that “all need to work together.”

One area where school competition plays out is in attracting, and retaining, teachers. As Allensworth points out, “It’s easy to be a good teacher, or to look like a good teacher, in a highly-resourced school.” The performance evaluations used to hold teachers accountable create incentives that work against deploying the best teachers to the schools of greatest need.

“A lot of the reform has been about getting rid of the bad teachers,” said Dan Montgomery, president of the Illinois Federation of Teachers. “We need to reinvest in building up great teachers.”

“What every other country in the world does is make it difficult to become a teacher, but then make sure that the right people become teachers”—and then provide them with the “great education and great support” needed to excel in the classroom.

“It’s easy to be a good teacher, or to look like a good teacher, in a highly-resourced school.” The evaluations used to hold teachers accountable work against deploying the best teachers to the schools of greatest need.

Through Crain’s online event portal, audience members were invited to submit their own questions, and help prioritize questions proposed by others. The panelists offered their expertise on some of the most pressing concerns:

Q: Should the State take over Chicago Public Schools? What would be the impact?

John Deasy responded with his own question: “Does the State have a proven history of doing this successfully? If someone were going to take over the schools, you’d want to see a track record of running schools well.”

“I don’t think you’d want someone taking over the airline who has no idea how to fly a plane.”

Q. Racial segregation is a huge issue in our city and our schools; why don’t we talk about it?

Montgomery addressed the “representation gap” between students of color and their teachers. From 2002 to 2011, the number of African-American teachers in Chicago schools declined by 39%—a more drastic drop than the declining national trend.

Teachers of color are an important asset to schools for a number of reasons, the research finds—from higher motivation to work with economically disadvantaged students in hard-to-staff schools, to higher expectations of students of color, which can result in increased academic and social growth. They also serve as role models of leadership and academic success that influence students’ ideas of their own potential.

In Deasy’s words, “Youth need to see leaders who look like them.”

For Ponce de Leon, the representation gap extends beyond teachers to the administrators and lawmakers who set school budgets. “The people who allocate the resources don’t look like the people who live in the neighborhoods and attend the schools.”

In a phrase that would be picked up by panelists throughout the day, Deasy cited the need to help move “from advocacy to agency”: from a model where those with access to power use it to champion the rights of others, to a model of empowering less privileged voices to speak on their own behalf.

Journalist Linda Lenz moderated the panel discussion, which ranged from racial segregation to the role of the State in overseeing—and funding—Chicago schools.

Q: How can the Mayor, the Chicago Teachers Union and Chicago Public Schools repair and rebuild a relationship that puts students at the center?

Ponce de Leon pointed to the example of Generation All, which originated with the heads of CTU and CPS at the table, finding common cause in supporting high-quality neighborhood public high schools for every community in Chicago.

For Dan Montgomery, an answer lies in the mayor embracing an elected school board, whose members include students, as has been adopted in some other large urban districts.

Montgomery also recommended “open bargaining” between the CTU and the City, which the public is invited to observe, bringing transparency to the process and prompting both sides to consider their communication in new ways.

In closing, the panelists shared their insights into the positive: the assets in local education, and the way forward.

In Ponce de Leon’s perspective, “We’ve focused on choice for a long time. Now we just need to guarantee. We need to bolster neighborhood public high schools as guaranteed high-quality options for all students,” thereby preventing the holllowing-out of neighborhoods as families head to the suburbs, where strong local schools are guaranteed.

As the only schools available to every student, regardless of resources or test scores, neighborhood public schools are essential to ensuring that the next generation of Chicagoans are educated and prepared to participate in civic life. And, despite being underfunded and undervalued, Ponce de Leon believes, “they’ve risen to the challenge.”

The conversation also shone a light on the energy and passion of everyone associated with Chicago’s education system. To have parents willing to go on hunger strikes in support of their local schools is a tremendous asset to be leveraged for change.

As John Deasy explained, “Education is not an entitlement, it’s a right. And we protect—and fund—rights in this country.”

Crain’s has created a Facebook group to continue the day’s conversations; you can read more and join in at facebook.com/groups/futureofchicago.